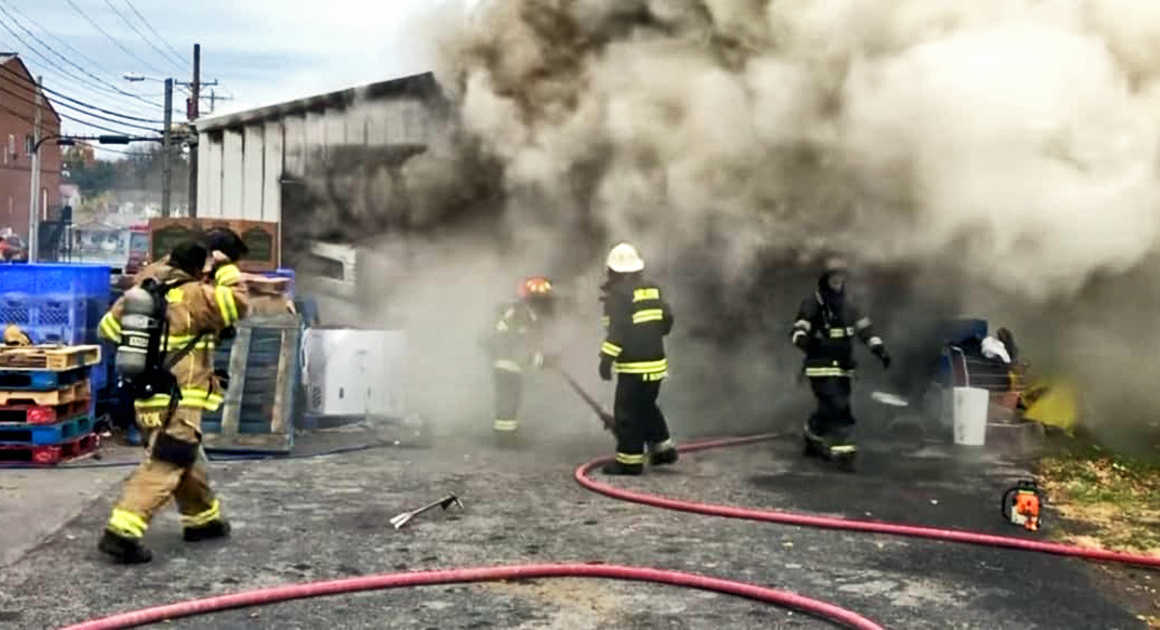 Photo: Lancaster City Fire and Rescue
First responders are attempting to collect enough food to make up for more than 100 Thanksgiving dinners lost in a fire at the Garrard County Food Pantry on Sunday, Nov. 14.

First responders are trying to help the Garrard County Food Pantry save Thanksgiving for needy families in that county.

The Kentucky State Police Richmond Post is teaming up with the Lancaster Police Department for a special collection event.

The food pantry was burned down on Sunday, Nov. 14. And while the suspected arsonist has been apprehended, the pantry, which serves 400 senior citizens and 800 families on a monthly basis, is considered a total loss. No one was hurt in the fire, but Angela Cash, the co-director at the food pantry, said about 100 donated Thanksgiving meals, including more than 100 turkeys as well as several Christmas presents intended for children were destroyed in the fire.

Donations are being collected at the Lancaster Police Department (214 Richmond Street, Lancaster) who are holding a cram the cruiser event starting Wednesday, Nov. 17, through Friday, Nov. 19. Suggested donations include non-expired canned fruits, vegetables, soups and meats, macaroni and cheese, cereal, peanut butter, jelly, chili or spaghetti sauce, brownie and cake mixes, coffee, water, powdered milk and juices. Monetary donations can also be made out to the Garrard County Food Pantry.

According to Lancaster City Fire and Rescue, the fire started a little before 10 a.m. on Sunday. The accused arsonist, Debra Smalling, 60, of Lancaster, was identified through surveillance footage. Smalling was arraigned Monday morning in Garrard District Court, according to WKYT. She is charged with 2nd degree arson and 1st degree criminal mischief. A plea of not guilty was entered on Smalling’s behalf, according to media reports. Smalling admitted to placing a lit cigarette on some cardboard and paper stacked against the building, according to WKYT.

“We’re going to try and continue on as normal as we can, but it’s going to take a lot of prayers and a lot of work, cause as you can see, we lost everything,” Cash told WLEX. “It’s a mess right now. I’m still in shock. I don’t know how to take it or what to say.”

In addition to the police food drive, Cash said anyone who would like to help replace the Thanksgiving meals that were lost can bring turkeys and other food items to board member Monty Majors at First Southern Bank (27 Public Square, Lancaster).

For more information about the Garrard County Food Pantry, visit their Facebook page.