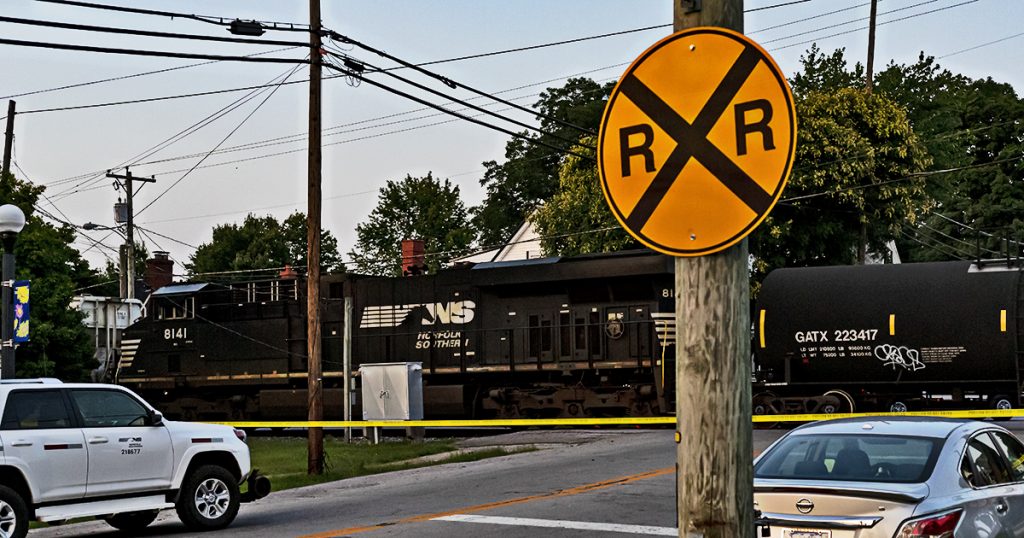 The Harrodsburg Herald/Robert Moore
Last week’s derailment left every railroad crossing in Harrodsburg except for the one at West Lane blocked for about seven hours. Even when they’re rolling, because of the size of the trains and the speeds they travel, crossings are blocked for longer than state and local ordinances allow, officials say.

Last week’s derailment may not have caused a lot of damage, but it’s got local officials singing the railroad blues.

Seven cars on a Norfolk Southern train flipped over on Thursday, July 22. For the next seven hours—how long it took railroad crews to clear the tracks—the West Lane crossing was the only one open in Harrodsburg.

But even when the trains run smoothly, they often take a long time to make their way through town. Back in 2018, this reporter determined the average train coming through Harrodsburg was 43 cars long, not counting double-deckers.

Under state law, railroads are prohibited from blocking any public highway or street for more than five minutes at a time. But it often takes trains longer than that.

Local officials have tried to get the railroad to abide by local ordinances. About five years ago, Sheriff Ernie Kelty cited the railroad.

“It’s not as simple as you think it is,” Kelty recalled Tuesday. He said it took months to resolve the dispute.

He said he couldn’t cite the conductor, because citations have to be sent to the main office. In addition, each crossing is supposed to be assigned an identification number. The ordinance only covers official railroad crossings, and it was determined the crossing where the violation took place was not numbered and therefore not an official crossing.

Mercer County has been relatively lucky. According to County Attorney Ted Dean, when the Pulaski County sheriff cited a train, the case ended up in federal court. Dean said it cost Pulaski $25,000 in legal fees, which was not covered by the county’s insurance. In the end, the judge ruled local entities could not enforce their regulations because they were preempted by the federal railroad safety act.

“While that statute is still on the books, we’ve determined the ordinance is not enforceable,” Dean said.

“We’re not citing trains any more,” Dean told the fiscal court Tuesday. “We’re not getting hauled into federal court.”

Officials say they’ve successfully worked with the railroad in the past on other issues.

Magistrates Ronnie Sims and Donnie Webb said Norfolk Southern has been good on repairing issues in their districts. While the railroad does well on maintenance, when it comes to not blocking intersections, they have not been as forthcoming.

So what can people do the next time they’re stuck at a crossing waiting for a train with seemingly no end to finally pass by?

Dean said they needed to funnel their complaints to their congressional representatives.