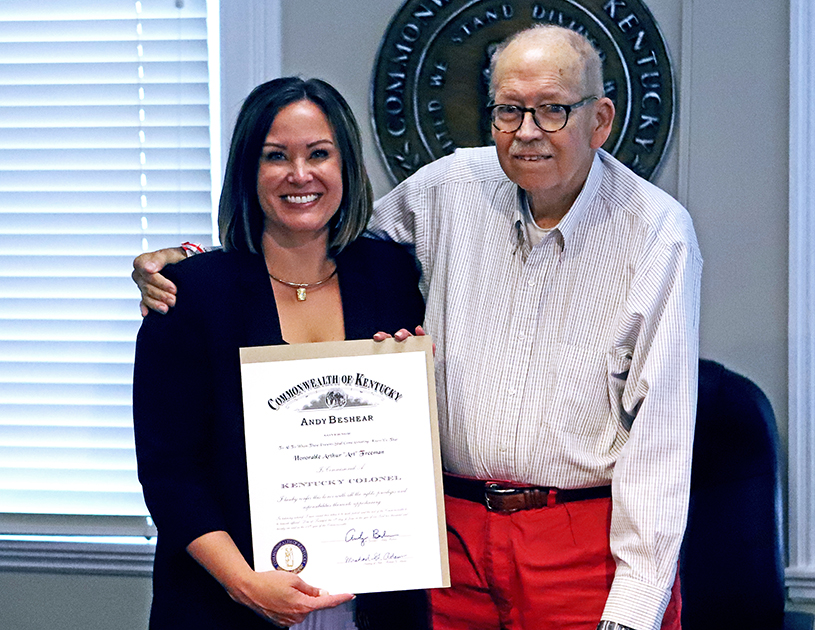 The Harrodsburg Herald/Robert Moore
Lt. Gov. Jacqueline Coleman presented Mayor Art Freeman with a certificate naming him a Kentucky Colonel, the highest honor in the commonwealth of Kentucky. Freeman, who was diagnosed with leukemia shortly after being elected mayor, is resigning to focus on his health.

Mayor Art Freeman’s last city commission meeting was an eventful one, with the commission passing a $15.6 million budget for the upcoming fiscal year, a series of raises for police officers and firefighters and introducing new rate structures for water and sewer. The meeting ended with Freeman, who is resigning because he is undergoing treatment for leukemia, being named a Kentucky Colonel by Lt. Gov. Jacqueline Coleman.

The city commission passed a $15.6 million budget, which goes into effect on July 1. City officials scrambled to get the budget finished before the end of the fiscal year, giving it first reading at a special-called meeting held last week. Allocations include $7.7 million for the water and sewer operating fund, $6.6 million for the general fund, $570,300 for the tourism development fund-which the city collects via the restaurant tax and the tourist commission allocates-$190,000 each for municipal aid fund and the ABC fund and $42,550 for cemetery fund (perpetual care). Commissioner Adam Johnson moved to approve the budget while Commissioner Marvin “Bubby” Isham seconded. The budget passed unanimously.

The commission also gave second reading to ordinance 2021-07, which added nonrecurring water department charges. The new charges include a $25 fee for connection/turn on, in addition to the $100 deposit, depending on the service; a $25 disconnect fee; a $35 reconnection fee for nonpayment; a $50 reconnection fee for after hours; $85 charge for nonpayment for North Mercer Water District customers—the district charges the city $50, according to the ordinance; a $40 late fee; a $35 for customer requested meter checks or sewer stops—the fee will be waived if the issue is found to be on the city’s side; and a $75 fee for unauthorized turn-ons or meter tampering. The ordinance also raises the customer deposits from to $100 for residential users, $150 for commercial, and establishes new deposits of $300 for restaurant/hotels and $400 for industrial. Commissioner Johnson moved to approve the new fees, with Isham seconding. The ordinance passed unanimously.

The commission gave first reading to ordinance 2021-09, which sets new water rates. Mayor Freeman said it is a 1.4 percent increase based on the consumer price index. The minimum water bill will go 16 cents, from $12.11 to $12.27 for 250 cubic feet of water per month. The average bill will increase from three to six cents, said Commissioner Isham.

After an executive session, Lt. Gov. Coleman presented Mayor Freeman—whom she called her favorite mayor—with a certificate naming Freeman a Kentucky Colonel. Freeman’s resignation goes into effect on June 30. The city will have 30 days to appoint his replacement.

Freeman thanked Coleman for the honor, the highest one in the commonwealth of Kentucky. He also noted he had just welcomed a new grandchild to the family. He has offered to help the city prepare for its 250th anniversary in 2024.