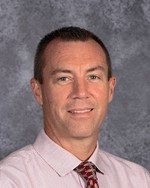 Jason Booher is the new superintendent for the Mercer County School District.

Booher, who is currently the principal at Pikeville High School, will assume the superintendent’s duties at Mercer on Aug. 1. Outgoing superintendent Dennis Davis retires on July 31. Booher and Davis will work together on the transition through July, according to a school district press release.

The Mercer County Board of Education voted to hire Booher at their meeting last Thursday. According to a press release, 20 candidates applied for the superintendent position, which was narrowed to five finalists by a superintendent search committee comprised of district staff and community members.

“It is an honor to be selected as the next superintendent of Mercer County Schools,” said Booher in a press release. “I would like to thank all those involved in the selection process. Mercer County has a rich tradition of excellence, and I look forward to the challenge of leading them to even greater heights.”

Booher has served as principal at Pikeville High School since 2018. He previously served as assistant principal and athletic director. Prior to joining Pikeville 2014, Booher served as assistant principal at Covington Holmes High School-where in four years, he coached the Bulldogs to winning the 2013 Ninth Region tournament championship, a 104-27 record and a .793 percentage winning percentage-as well as Shelby Valley High School and Belfry High School. He taught high school math for five years and has 18 years of coaching experience. He earned a master of arts degree and Rank I along with  superintendent, director of pupil personnel and instructional supervisor certifications from Morehead State University and a bachelor of arts in education from the University of Kentucky. According to the school district, Booher has been married for 25 years and has two children who are attending college.

“Mr. Booher’s experience in teaching, administration and coaching made him a top candidate in our search,” said Mercer County Board of Education Chairman Randy Phillips. “His accomplishments over the last several years are impressive and I cannot wait to serve alongside him as we look to take Mercer County schools to the next level.”

The board also approved paying up to $4,000 for Booher’s moving expenses.

Once he’s in office, Booher will have to hit the ground running. The school board also voted unanimously to accept requests from students who wish to use the 2021-2022 school year as a supplemental year to retake or supplement courses they had already taken.

At the meeting, Superintendent Davis call Senate Bill 128, which authorized the program, the “do over bill.” The purpose is to help students who fell behind during the extended shutdown due to the COVID-19 pandemic. Davis said the school district is already offering Titan Academy for 24 days a year for the next three years to help students catch up.

The bill will allow students to repeat a grade, but they must take the same courses they took the year before for no credit if they’re a senior. Seniors could be in class all day long and receive no credit.

Davis said the larger issue is that the program could earn the entire school district a lower state rating because of the hit to the graduation rate. Under state and federal law, any school with a graduation rate below 80-percent is classified as a comprehensive support and improvement school. While the designation makes schools eligible for additional turnaround support, it can also scare away parents who use the state’s school report system to select the best educational options for their children.

“You’re considered one of the lowest performing schools in Kentucky,” Davis said.

Students were given until May 1 to request a do-over. Davis said 42 students have opted to repeat a year. the majority of them are in the sophomore class. Students have until the first day of the school year to opt out, he said.

Davis was named interim school superintendent back in 2011. During his tenure, the school system has undergone a major reorganization, closing and selling buildings such as the former Harrodsburg High School while consolidating schools in order to improve the district’s academic performance across all student groups and to provide more academic course offerings.

The district has been forced to navigate changing state and federal standards, which Davis has likened at times to hitting a moving target. For at least the next three years, they may also be forced to contend with fluctuating school ratings thanks to the do-over program.

However, that did not mean that he was against the program. Davis said he saw the benefits of the do-over program as well as the district’s own initiatives to get students up to speed.

The board voted to approve SB128.