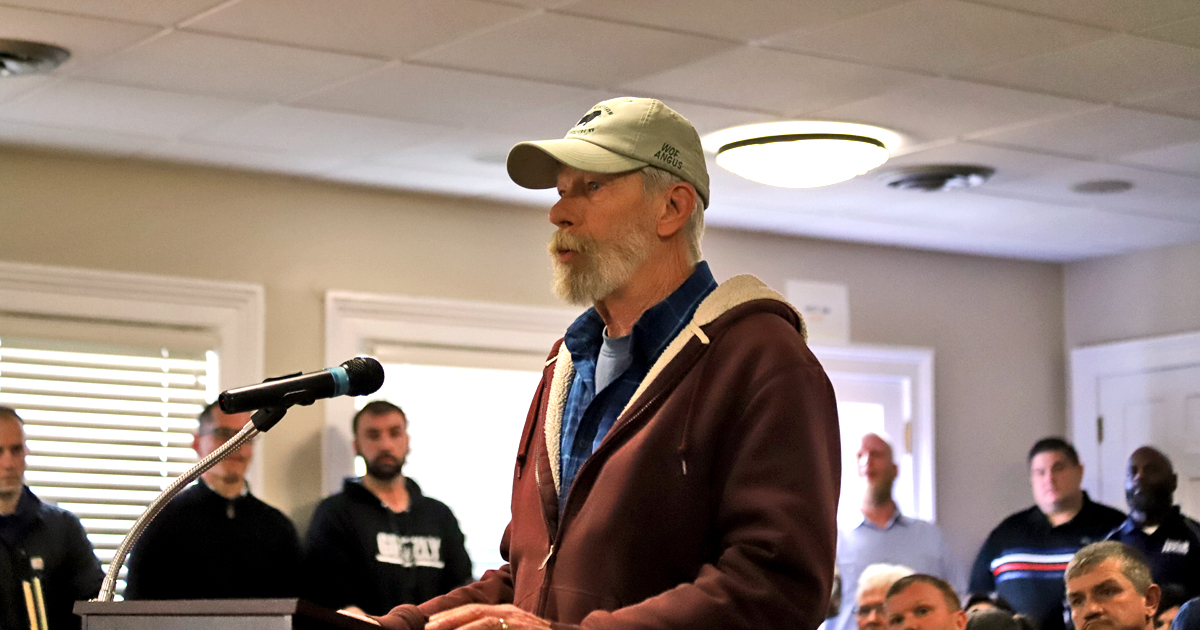 Pete Dennen spoke in favor of a proposed moratorium on new treatment centers several years ago. The planning and zoning has recommended approving a text amendment that would allow rehab centers as conditional uses within city limits. (File photo).

Herald Staff
rmoore@harrodsburgherald.com
The Harrodsburg-Mercer County Joint Planning and Zoning Commission has approved recommending a proposed text amendment which would allow drug rehabilitation clinics as a conditional use in certain zoning districts.
The commission held a public hearing on Tuesday, May 11, to get comment on an amendment which would allow hospitals, clinics and similar medical facilities, mental health facilities, nursing homes, convalescent homes, rest homes, orphanages, rehabilitation homes, assisted living homes, family care centers/providers, day care providers and homeless shelters as a conditional use in I-2 (heavy industrial) zoning districts in the city. In the county, such conditional uses are already permitted.
Only three people spoke at the hearing.
“We’re facing a lot of issues finding a home,” said Mark LaPalme of Isaiah House.
Isaiah House already operates a 16-bed treatment facility for women on Bohon Road. Two years ago, plans to expand operations in Mercer County failed after residents expressed concerns with how Isaiah House handles clients who walk away from the treatment center. In February 2019, a female client began knocking on neighbors’ doors, asking to use the phone. While Isaiah House officials said they had revised procedures to arrange transportation for clients who wish to leave treatment, the Mercer County Board of Adjustments failed to pass a conditional use permit for another 16-bed facility on Bohon Road. Isaiah House seeks to use the former Trim Masters building as corporate headquarters and would also operate a treatment center on the premises, if they can get permission from the city.
On Tuesday, LaPalme said Isaiah House serves 105 counties. He said clients paid $1.8 million in payroll taxes and could help with any labor shortage. “We can provide employees,” LaPalme said.
Tobie Reeser Sherrow, who administers the Mercer County Harm Reduction Syringe Exchange Program, said treatment was needed in Harrodsburg. “We need treatment and bad,” Reeser Sherrow said. “We need help.”
Esther Hayslett, the director of pupil personnel for Mercer County schools, said she had questions. Hayslett noted that Mercer County Senior High School would be in close vicinity to the new Isaiah House facility when it opened. She said school officials didn’t want people trespassing on school property.
“We just have questions,” Hayslett said.
Bobby Upchurch, chair of the planning and zoning commission, said Hayslett’s questions were more specific than what was being covered in the hearing. The hearing was only about the text amendment, and not about any specific proposal.
“This is more broad and general in nature,” said Upchurch, who said he didn’t have any answers for Hayslett’s questions.
With no other speakers, the commission closed the public hearing. Upchurch asked for comments from commissioners.
He said conditional uses like this are currently not allowed under any zoning areas within the city. “We currently don’t have any way of addressing this,” Upchurch said. “This would give us a place to address this.”
Shawn Moore, executive director of planning and zoning, said applicants would have to appear before the board of adjustments. He said conditional uses are allowed under certain conditions.
“They are treated on a case by case basis,” Moore said. “It’s not a guaranteed thing.”
“It’s something that needs to be addressed,” said Upchurch, who said the text amendment would give elected officials an option in the fight against drugs.
Commissioner Mike Harden moved to approve the text amendment as presented. Commissioner Jim McGlone seconded. There was no further discussion. The motion passed unanimously. The city commission will next consider the amendment at a future meeting.