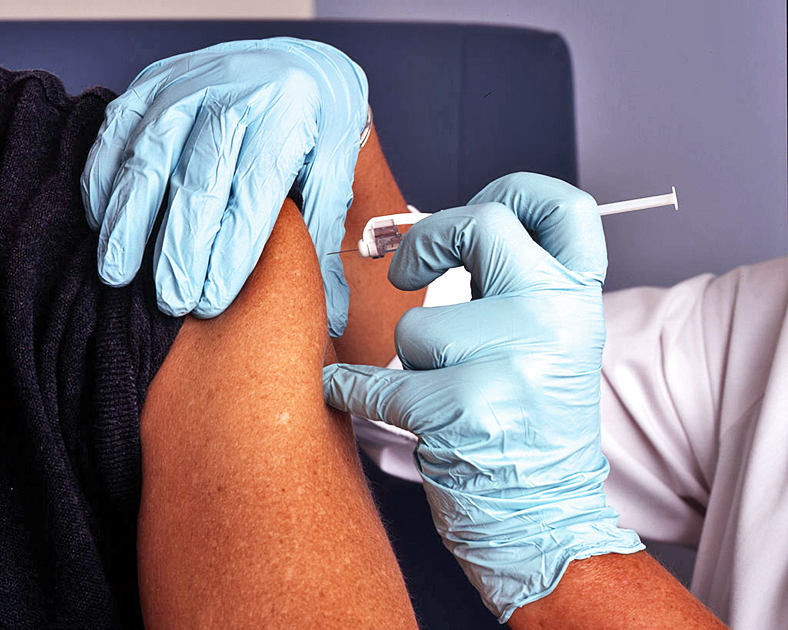 By Rhoda Baer, the National Cancer Institute, via Wikimedia Commons.

Gov. Andy Beshear said the commonwealth could begin dispensing the COVID-19 vaccine as soon as next week.

On Monday, the governor said 38,000 doses of the vaccine manufactured by Pfizer could be administered by Tuesday, Dec. 15, depending on if the drug maker receives emergency authorization from the Food and Drug Administration this week.

The initial vaccinations are reserved for long term care facilities and health care workers. Kentucky will only be able to provide the vaccine to 11 hospitals. Beshear said it was “natural” that other hospitals would be upset that they were not the first to receive vaccine and he asked for their patience. “It’s going to be the hardest patience that anyone could ever ask for,” the governor said. “There is not enough to go around.”

Beshear said there may be as many as five shipments of the two vaccines in December. In addition to the vaccine from Pfizer, he said they hope to get first shipment of the Moderna vaccine, which does not require refrigeration and can be broken into smaller groups. He said he hopes to get 76,700 doses of the second vaccine to other hospitals in the second week, then another 33,800 doses in the week after that.

Beshear said the federal government is holding back the second dose.

He said he hopes to get two more shipments of the Pfizer vaccine by January, but said the state had not been provided with exact numbers.

The governor said he hopes to get the vaccine to other groups in January and February. He has already asked school superintendents to create lists of teachers who want a vaccine, prioritizing those who come in contact with students the most.

Beshear said when all school personnel can get the vaccine, “that could totally change the game.”

The first vaccine was developed by Pfizer and BioNTech. According to a November press release, the vaccine was found to be more than 90-percent effective in preventing COVID-19 in participants without evidence of prior infection. According to the Pfizer, 43,538 people were enrolled in the study and no serious safety concerns have been observed. However, transporting the vaccine is a logistical challenge. The vaccine must be kept at temperatures below -70 degrees Celsius, and is shipped in small batches which cannot be broken up. The other vaccine, which is manufactured by Moderna, has been found to be 94.1 percent effective in a study of 30,000 people, according to a press release. The Moderna vaccine is easier to transport. It must be kept at temperatures below -20 degree Celsius, and can be broken up for transport to different locations. The Pfizer vaccine has already been approved in the United Kingdom while the Moderna vaccine has been approved by the European Union.

“We are about to have, not one, but two vaccines less than 10 months after the first infection,” said Dr. Steven J. Stack, the commissioner of the Kentucky Department for Public Health. “This is nothing short of a modern miracle.”

The vaccines arrive as COVID-19 continues to spread across Kentucky and the world. According to the Kentucky Department for Public Health website, 202,592 Kentuckians have tested positive for COVID-19, with 1,972 new cases announced on Monday, which is usually one of the slowest days of the week for new cases. In addition, 10 new deaths were announced Monday, raising the state’s death toll to 2,082. So far, 30,239 Kentuckians have recovered.

Locally, the Mercer County Health Department announced 46 new cases over the weekend, with 184 current cases and 152 people in quarantine. So far, 21 Mercer County residents have died, while 641 have recovered.

According to Johns Hopkins University, there are over 67.5 million confirmed cases of COVID-19 across the world, with more than 14.9 confirmed cases in the U.S. alone. There have been over 1.5 million deaths recorded around the world with 283,703 deaths reported in the US.

Businesses both here in Mercer County and across the world have been severely impacted, both by the pandemic and by the steps taken by the government to prevent its spread. At Monday’s briefing the governor said they don’t anticipate or plan on extending the executive order shutting down in-person dining. He also does not anticipate expanding attendance at restaurants beyond 50 percent when they do reopen their dining areas.

While hailing the vaccines as a miracle, Gov. Beshear and Dr. Stack asked the public to be patient.

Stack said the state will do everything they can to make sure everyone has access to the vaccine.

“Not everybody can be first in line,” he said.