At Wednesday’s briefing, Gov. Beshear announced he was ordering schools to cease in-person instruction and bars and restaurants to stop offering indoor dining. The governor also ordered indoor sporting events, including practices, to be canceled. That does not include college or professional athletics. Venues such as Rupp Arena will still be allowed to operate at 15 percent capacity.

The governor said all public and private schools must cease in-person classes starting Monday, Nov. 23. Middle and high schools can reopen on Monday, Jan. 4. Elementary schools may open on Monday, Dec. 7, as long as the county is not in the red zone.

Gov. Beshear also announced the creation of a $40-million fund to assist bars and restaurants impacted by the restrictions. Entities currently operating as bars and restaurants that qualify can receive $10,000 with a maximum of $20,000 per business for those with multiple locations.

Businesses with at least 50-precent of their sales in drive-thru and those owned by publicly traded companies are not eligible for aid. Applicants must be in compliance with the governor’s executive orders. Applications will be accepted online starting Nov. 30.

“These restrictions are necessary now,” said Beshear, who noted Kentucky is entering a third wave of COVID-19 infections. On Wednesday, he announced 2,753 new infections, the fourth highest day since the pandemic began. The five highest days for new have all been recorded over the past week, he said.

“We cannot continue to let this third wave devastate our families,” he said.

The governor called the restrictions “significant but targeted and surgical steps” in contrast to the shut-down at the beginning of the pandemic. He said he was not asking hospitals to curtail elective procedures, although he noted that many hospitals, concerned about being overwhelmed as the number of new cases grow, have begun curtailing elective procedures on their own. He said there would be no further restrictions on retail. The governor said he doesn’t think another shut-down is on the table. Said the economy will remain open as long as they can make “surgical” actions.

While he acknowledged the size limit on private gatherings would be difficult to enforce, the governor noted that most of the businesses impacted by the executive orders are licensed by the state. He asked everyone to help fight the spread of COVID-19. “We’re at war with an enemy we can’t see,” Beshear said. “We have got to get this right.” 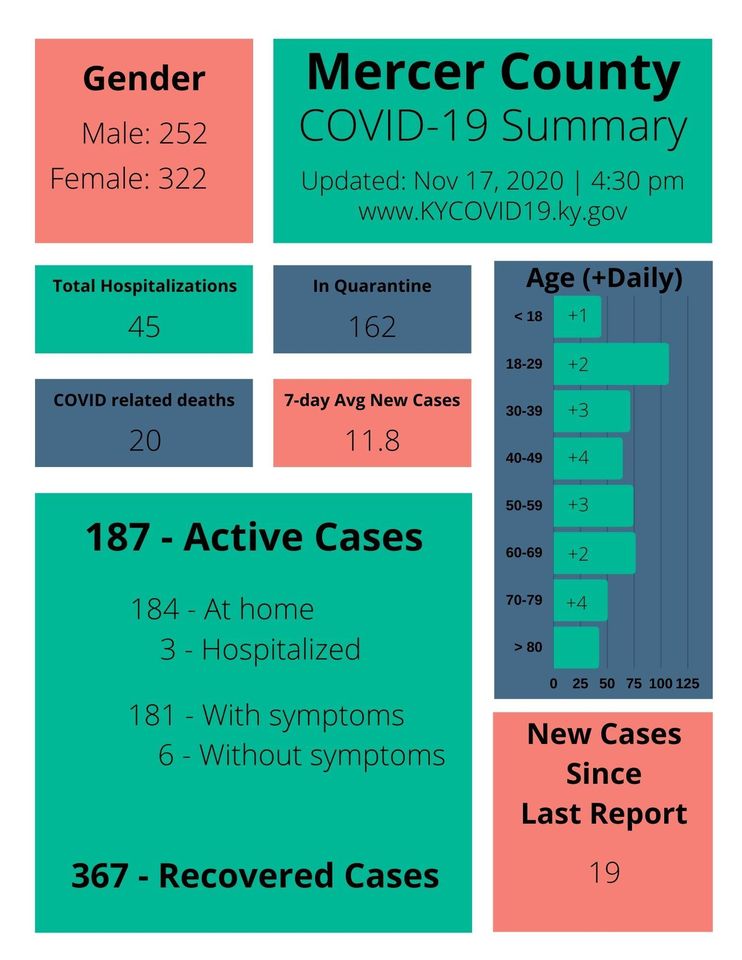 The number of new cases continue to climb, including here in Mercer County. On their Facebook page, the Mercer County Health Department announced 19 new cases. Currently there are 187 active cases, with 162 people in quarantine and three people in the hospital. So far, there have been 20 deaths while 367 are listed as having recovered.

On Wednesday, the Kentucky Department of Public Health announced 2,753 new cases, raising the commonwealth’s total to 144,753. In addition, 15 new deaths were announced, raising Kentucky’s death toll to 1,712. So far, 25,058 Kentuckians are listed as having recovered.

The department also announced that 1,553 people are hospitalized, 359 are in intensive care while 176 are on ventilators. For the full daily report, click here.