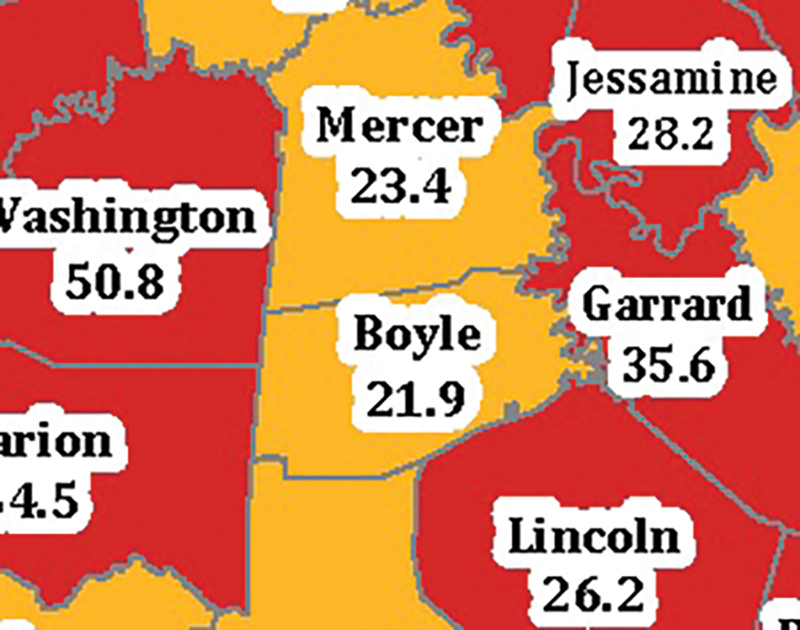 Mercer County is flirting with falling back into the red zone for COVID-19 cases. On Monday, the  county’s seven day incidence rate  moved up to 26.1, but it had fallen back to 23.4 on Tuesday.

Mercer went into the red at the end of last month, forcing local schools to cancel all sports except golf and to postpone the opening of in-person instruction.

If Mercer falls back into the red on Thursday, local leaders have been asked to follow nine recommendations, which include rescheduling, postponing or canceling public and private events.

More than 70 of the commonwealth’s 120 counties are currently in the red zone, which is determined by the incidence rate. That rate is calculated by dividing the daily average of total number of unique cases in each county over the past seven days by the U.S. census bureau county population, and multiplying by 100,000.

During Tuesday’s briefing, Gov. Andy Beshear said those school districts had not made a good decision. Beshear announced 1,795 new cases Tuesday, raising Kentucky’s total to 111,379. That is the sixth highest total of new cases since the pandemic struck Kentucky in March. According to the governor, 255 of the new cases are in children aged 18 or younger.

“We are seeing not only a surge in the virus, but more and more of our kids by percentage who are getting it,” Beshear said.

In addition, 11 deaths were announced, raising Kentucky’s death toll to 1,503, which the governor called a “grim milestone.”

The number of hospitalizations is increasing across Kentucky. The governor announced 1,037 people are hospitalized, with 259 in intensive care and 116 patients on ventilators. The positivity rate, which is based on a seven-day rolling average, is 6.24 percent

Globally, there have been over 47.7 million confirmed cases, with over 1.2 million deaths reported. According to Worldometers.info, 34.2 million have been  listed as having recovered.

Even as the number of cases continue to mount, there are some who call the COVID-19 a hoax. On Tuesday, Gov. Beshear said the pandemic is real.

“This virus isn’t going away the day after the election,” he said.