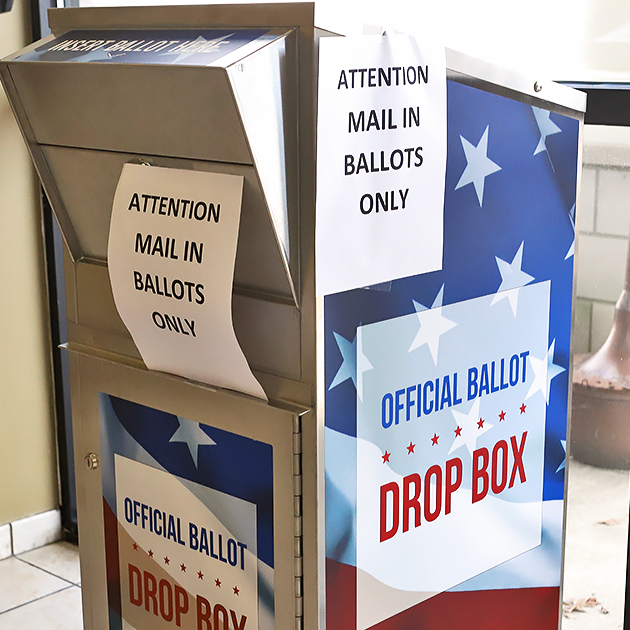 Mail-in voters can either return their ballots by mail or drop them off at the Mercer County Fiscal Courthouse (207 West Lexington Street). The final day for mail-in voting is Monday, Nov. 2.

At least 10-percent of Mercer County’s registered voters have already cast their ballots for the 2020 election.

The numbers here in Mercer County match the numbers in the rest of the state. According to the U.S. Elections Project, 398,142 Kentuckians have already voted. That’s a little over 20-percent of the number that voted in the 2016 election.

Nationally, voters have cast nearly a quarter of the total votes counted in the 2016 general election, with over 34-million Americans having voted.

Early in-person voting will continue at the Mercer County Fiscal Courthouse (207 West Lexington Street) until Nov. 2. Voting will be open Monday through Friday from 8 a.m. to 4:30 p.m. and on the next two Saturdays—Oct. 24 and Oct. 31—from 8 a.m. until noon.

While much of the attention has been focused on the races between  Pres. Donald Trump and former Vice-President Joe Biden and between Sen. Mitch McConnell and Democratic challenger Amy McGrath, there are two proposed constitutional amendments voters will consider this year.

Marsy’s Law was adopted in 2018 and garnered nearly 871,000 (63 percent) “yes” votes but was overturned in 2019 when the Kentucky Supreme Court ruled unanimously the amendment’s wording was too vague.

This year, the entire amendment—all 614 words—will be on the ballot. The measure would provide crime victims with specific constitutional rights, including the right to be treated with fairness and due consideration for the victim’s safety, dignity, and privacy; to be notified about proceedings; to be heard at proceedings involving release, plea, or sentencing of the accused; to proceedings free from unreasonable delays; to be present at trials; to consult with the state’s attorneys; to reasonable protection from the accused and those acting on behalf of the accused; to be notified about release or escape of the accused; to have the victim’s and victim’s family’s safety considered when setting bail or determining release; and to receive restitution from the individual who committed the criminal offense.

Marsy’s Law is named after Marsy Nicholas, a senior at the University of California at Santa Barbara, who was murdered by her ex-boyfriend in 1983. First passed in California in 2008, similar laws have been passed in nine states and are being considered in at least six others in addition to Kentucky.

The ACLU also contends Marsy’s Law provides no guidance to lawmakers or judges on how to prevent violations of the rights guaranteed to all people by the U.S. Constitution and addresses “real financial concerns” by creating a need for substantial additional resources but “does not allocate any.”

Supporters say Marsy’s Law is necessary because state courts sometimes fail to take crime victims’ concerns into account, moving cases along to conclusion without even communicating with the people who were most seriously hurt by a crime. Even where there are existing laws, such as victim notification before an inmate is released, mistakes happen, and when they do, victims don’t have much legal recourse, according to a statement from supporters in the Lexington Herald-Leader.

Voting will be different this year. In Mercer County, there will be five local voting centers on election day. Mercer County Clerk Chris Horn said all precinct ballots will be available at each location on election day, so voters are free to vote at the location closest to them. The polls will be open from 6 a.m. to 6 p.m. If there are long lines, he said anyone who is in line but has not been able to cast their ballot by 6 p.m. will still be allowed to vote.

If mail-in voters haven’t received their ballots through the mail, they will be able to vote in-person, Horn said. Voters can either return the ballot by mail or drop it off at the Mercer County Fiscal Courthouse (207 West Lexington Street).

Early in-person voting will be available at the Mercer County Fiscal Courthouse (207 West Lexington Street) until Nov. 2. The hours are 8 a.m. to 4:30 p.m. Monday through Friday and 8 a.m. until noon on the next two Saturdays:  Oct. 24 and Oct. 31.

Mercer County will have five countywide voting centers. All precinct ballots will be available at each location on Election Day, Tuesday, Nov. 3, from 6 a.m. to 6 p.m.

For more information, call the Mercer County Clerk’s Office at 734-6310 or visit online at mercer.countyclerk.us.