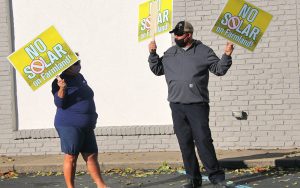 On Tuesday, the Mercer County Fiscal Court voted to deny amending zoning ordinances to allow solar farms as a conditional use on agricultural land and R-1 residential land which is both undeveloped and adjacent to agricultural zoned lands.

Outside the fiscal courthouse, protestors were waving signs opposing the amendment, which would have allowed the Mercer County Board of Adjustments to approve solar farms to be built on multiple lots. However, no public comment was heard at the meeting. After Mercer County Judge-Executive Milward Dedman read the ordinance, he asked for a motion from the court. Magistrate Jackie Claycomb moved to deny the amendment, which was seconded by Magistrate Tim Darland. Claycomb’s motion passed unanimously.