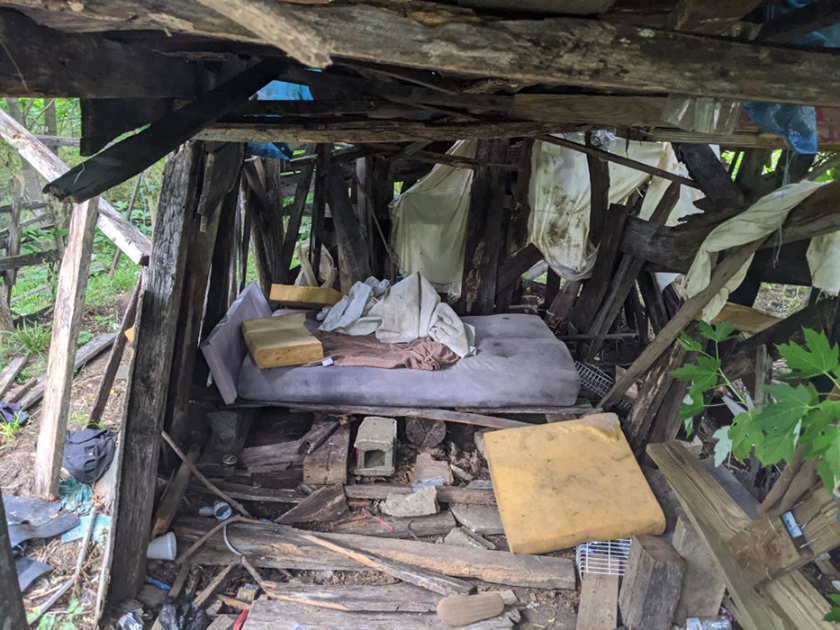 The forum opened with statements from Mayor Art Freeman about the necessity of community involvement and praise for the taskforce. Taskforce Chairman Jack Coleman updated the public on what the taskforce has done so far.

While explaining to the crowd the types and causes of homelessness, Coleman said addressing vacant property and people are completely different.

“It is import we keep the homeless taskforce and the dilapidated houses taskforce separate,” said Coleman. “We are aggressively moving forward with tearing down houses.”

In the end, many people do not have access to the resources to help them  through difficult times. A 1995 study commissioned by the National Alliance to End Homelessness found that up to 50-percent of foster youth were homeless within 18 months of aging out of the system.

“We have added a fifth category, Grand parents raising their grandchildren,” said Coleman. “The taskforce has no expectation of solving the problems on its own. We have identified the situation, gathered perspectives, engaged the people, established communication between groups and offered consistent opportunities to mitigate homelessness.”

Coleman opened the floor for questions and comments from the public after outlining the resources available for those in need.

“If you need a job community action can help, if you need a GED we can help, services are available to help with rent, utilities and mental health,” said Coleman. “We have tried to develop a network of opportunities to help. We didn’t have this network when we first started.”

“Some people are just a paycheck away from being considered homeless. We don’t have an answer for this problem,” said Short. “There isn’t one fix for this problem, but we need structure. We need to work together to help this situation.”

Pastor Paul Gibson of Harrodsburg Baptist Church said his church offers help to those in need with a team that works to help individuals but he understands the public frustration.

“We are in the heart of the city. This challenge hits us too. Just last week we had a couple sleep behind some bushes located next to our day care,” said Gibson. “We found a couple of needles and someone defecated next to the door where we walk in the children.”

Gibson said it is important as Christ followers to help those in need reminding the forum that his church offered to staff the heat shelters in which no one showed up.

“We are passionate and want to help the community in every way. We haven’t discovered the answer yet, but what we do know is we will have to work together,” said Gibson. “Our team helped a young man find housing a while back and he took a hit of something and destroyed the entire house before leaving.”

He said he is thankful for the taskforce and will remain helpful and hopeful for the future.

Gilbert Simpson relocated to Mercer County looking for a quieter life than his previous home in Atlanta.

“I live on East Poplar Street and I do see the homeless frequently,” said Simpson. “I do talk to them and confronted the ones I have caught on camera taking stuff.”

He said he has a five-old who witnesses things he shouldn’t.

“I don’t really mind that much when they take our plants and stuff as much as I mind the needles,” said Simpson. “I have a small child and the needles are something I worry about.”

He said he knows the homeless problem isn’t a new issue for big cities and suggested Harrodsburg seek out help from a larger city who has seen the issues before.

“I don’t have a solution, but I can help communicate with people who have been doing this,” said Simpson. “I love the community and I am willing to help any way I can.”

Marian Bauer, a long time resident of Harrodsburg, thanked the panel for not only providing the community forum, but for trying to help the community solve the problems.

“I found a full bag of human waste in the middle of Cane Run. I walk my dog and pick up litter often. I talk to these people,” said Bauer. “I have done jail ministry for years and I care but drug addiction is an issue. If we don’t deal with the drugs the issues will remain.”

Bauer said there was a compound behind Lemons Mill Brewery.

“That is where they were living. They don’t want jobs making $10 hour because they make more money dealing dope,” said Bauer. “I talked with one man, saying we have programs like Isaiah House. He told me people have to want to change.  So, there are a lot of issues here.”

Bauer thanked the street department for their work cleaning up the litter left behind in streams as well.

“We can all agree the homeless population today is different,” said Kelty. “We are facing a newer problem than we have ever seen in the past. We need to talk to cities who have been dealing with this a lot longer than us.”

Kelty said his office gets calls every day regarding homeless.

“I have actually driven some to Lexington. The ones that will accept help,” said Kelty. “I need a place to call to get them help.”

Many residents commented on the responsiveness of the police and sheriff department.

“They always come. But there is nothing they can do if someone is sleeping in your yard or near your house,” said Faith Bender. “I know one person said it is unsettling but I am afraid.”

Bender said she knows many are staying in the cemetery behind her house. She said she is afraid to go out to walk the dog.

“I have lived here 13 years and I have never been afraid to be in my home until now,” said Bender. “I can feel very sorry for their circumstances but at the same time I worked very hard to get where I am. For the first time in 30 years I am scared in my own house.”

Anna Boyce said she is also scared in her home on West Office Street.

“Last week I had to call the police three times in one day. They came every time,” Boyce said. “They showed up. In the past two weeks I have called them another five times for homeless fighting in front of my house.”

Boyce said she appreciates the police’s willingness to come every time she calls.

The homeless task force plans to continue meeting to reflect on the community comments, Coleman said. “We will have a couple more meetings then call another forum,” said Coleman.