Correction: the Harrodsburg Herald accurately reported information made available by the Kentucky Department of Public Health on their COVID-19 website. Going by the state website, we reported there were 20 infections and three deaths from COVID-19 connected to the Isaiah House Lisa Walker Rehab Facility in Mercer County. Mark LaPalme, CEO and founder of Isaiah House, disputed this information, saying there had been a maximum of eight infections, including an August outbreak of five infections at the Lisa Walker facility, which was closed for one week for a deep cleaning, and no deaths. After an inquiry, we received word from the KDPH earlier today that the number of deaths in their report was wrong due to a typographical error. There were no deaths at the Lisa Walker facility. We  have removed all references to Isaiah House from the original story and are issuing this correction to set the record straight. 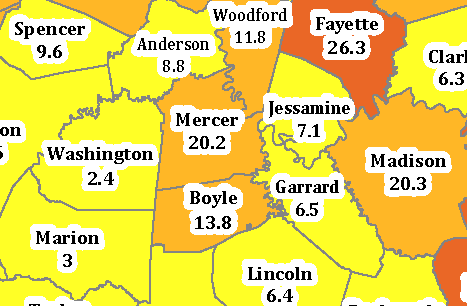 COVID-19 continues to grow in Mercer County, in the number of infections and deaths. According to the Mercer County Health Department’s Facebook page, the total number of confirmed COVID-19 cases has grown from 233 to 257 since yesterday, with 57 active cases. In addition, the number of deaths has grown to eight. Two people are currently hospitalized.

Much of the growth in local cases has occurred at long term care facilities. According to the Kentucky Department of Public Health, there are currently 39 active cases—33 residents and six staff—connected with Harrodsburg Health and Rehabilitation. There have been five reported deaths, all residents. According to the state, seven residents and eight staff members have recovered. At the Willows of Harrodsburg, there has been one recorded infection, a staff member, according to the state. In nursing and assisted living homes across Kentucky, 87 new cases were reported Thursday by the state, with 40 residents and 47 staff testing positive. Overall, 573 residents and 421 staff across the commonwealth are currently infected.

At Campbellsville University-Harrodsburg, there is currently only one infection, according to the university’s COVID-19 dashboard. Across Kentucky, 1,395 students and 45 faculty and staff are currently infected. At his briefing on Thursday, Gov. Andy Beshear announced eight new colleges have reported at least one case. 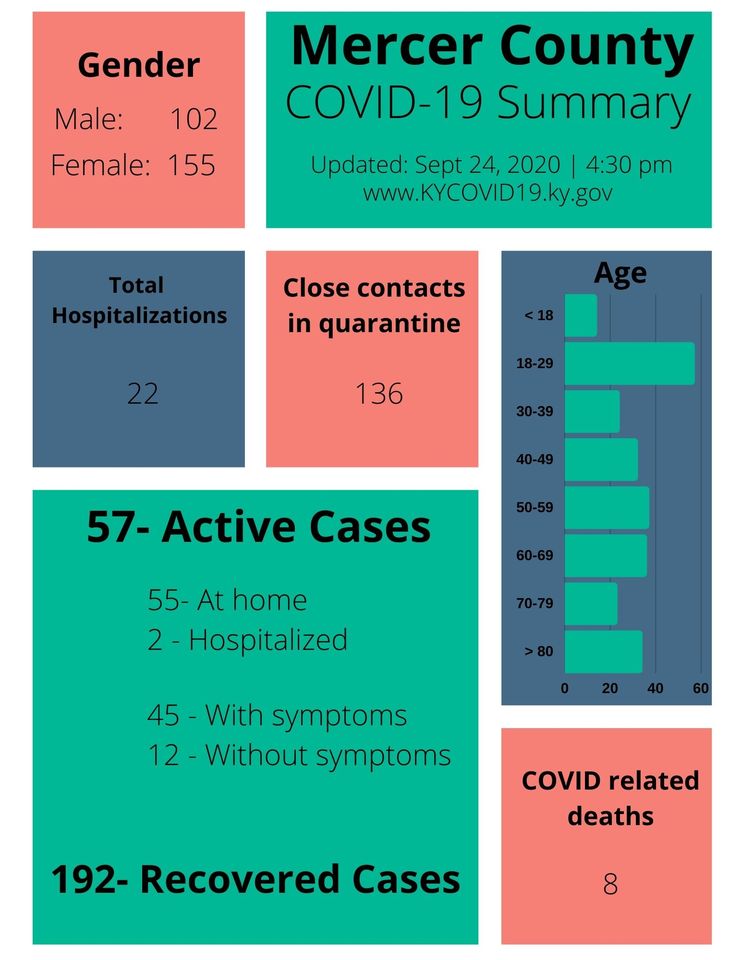 The state continues to list Mercer County in the orange, meaning the rate of infection is accelerated at 10-25 per 100,000. Last week, both Mercer County and Burgin Independent schools voted to resume in-person instruction on Monday, Sept. 28. In August, when the number of coronavirus infections began to skyrocket both in Kentucky and across the nation, Gov. Beshear asked schools to delay in-person instruction for six weeks. However, Beshear declined to ask schools to continue with online instruction past September. The governor was asked during his briefing Thursday about more restrictions.

“Right now we are at a place where we can handle more cases,” Beshear said. He said he would need an indication of a “severe escalation” like what happened in Florida and Arizona, where the local medical systems were overloaded with new cases.

On Thursday, the governor announced 745 new cases, with 225 new cases reported in K-12 schools. At Mercer County Schools, there has been only one recorded infection so far, a staff member, according to the state.

So far, 64,158 Kentuckians have been infected by the coronavirus, with 11,570 listed as recovered.

The commonwealth’s positivity rate—which is based on a seven-day rolling average—is at 4.57 percent, while the current mortality rate is at 1.77 percent.

Across the world, there have been over 32.3-million confirmed cases of COVID-19, according to Worldometers.info, with nearly a million deaths recorded. Over 23.8 million are listed as having recovered.

The United States remains the global epicenter for the pandemic, with over 7.1-million confirmed cases, including 33,500 new cases reported by press time Thursday. The only nation that comes close to the number of infections recorded in America is India, which has over 5.8 million confirmed cases. India has almost five times the population of the U.S.

In America, there have been 207,263 deaths, with 667 new deaths reported Thursday. Over 4.4 million Americans are listed as having recovered.