The commonwealth of Kentucky reached what Gov. Andy Beshear called a “a tough milestone” Wednesday as the number of deaths caused by COVID-19 passed a thousand.

At his briefing, Gov. Beshear announced 16 new deaths, raising Kentucky’s total to 1,004. Compared to most other states, that number of casualties is fairly low, he said, but it was still more Kentuckians than were lost in either the Korean or Vietnam Wars.

A wreath hanging ceremony will be held at the capitol rotunda tomorrow, Thursday, Sept. 10, at 10 a.m. The governor said he will order all flags at half mast starting through next week. Instead of a briefing, Beshear will directly address the state at 5:30 p.m.

According to Kentucky Health News, communities in the red zone have a positive test rate higher than 10-percent and more than one new case per 1,000 residents. To qualify for the yellow zone, counties have recorded new cases between 0.1 and 1 per 1,000 people or a positive-test rate of 5 to 10-percent.

The story of COVID-19 in Kentucky has not been as dramatic as in other states, such as New York, where 474,145 cases have been confirmed and 33,100 people have died. In Louisiana, which has a similar population to Kentucky, there have been 155,955 confirmed cases and 5,140 deaths, according to Worldometers.info.

While the disease appears to be receding in some of the most hard hit states in the nation, it has been steadily growing in Kentucky, even as colleges across the commonwealth reopen. The state’s death rate rose nearly a third–29.6-percent–from Aug. 29 to Sept. 4. According to Kentucky Health News, the commonwealth had 110 new cases per 100,000 people, ranking 19th in the nation. The national average was 88 cases per 100,000 population.

In addition, the governor announced 667 new cases on Wednesday, raising Kentucky’s total to 53,977. So far, 10,725 Kentuckians have recovered.

“For those of you who don’t think it’s serious, there are a thousand families you can talk to,” Beshear said. 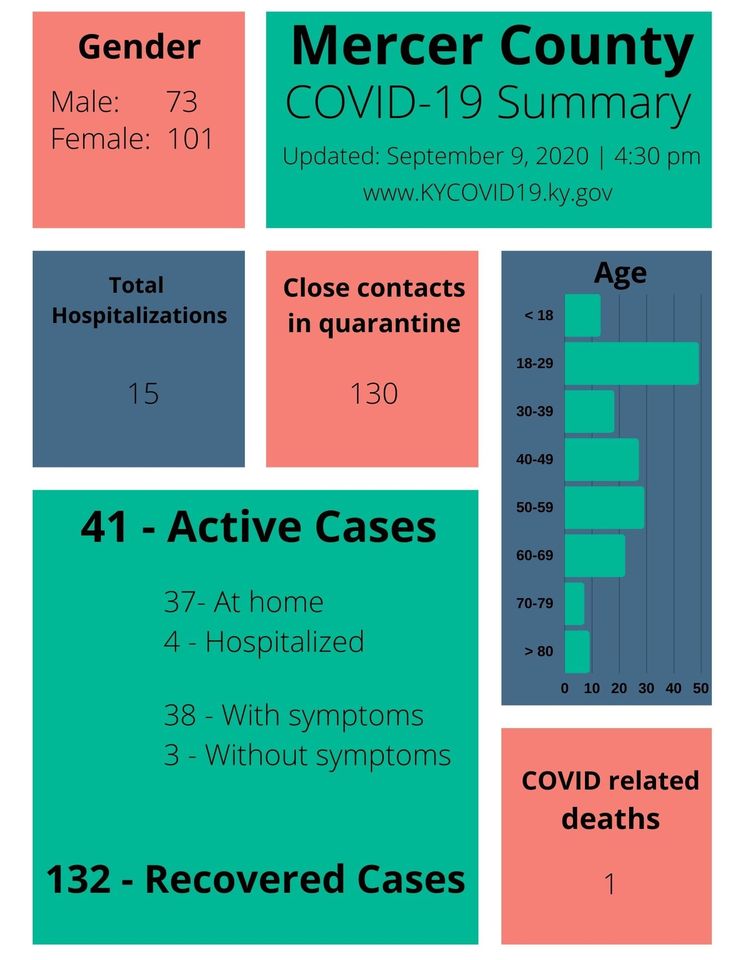 The Mercer County Health Department announced three new cases Wednesday, with 41 cases currently active. According to the health department, 130 close contacts are in quarantine. So far, 15 people have been hospitalized—with four people currently in the hospital—and one death. In addition, 132 people are listed as having recovered.

At the global level, there are nearly 28 million confirmed cases, with 905,777 deaths. According to Worldometers.info, nearly 20 million people around the world are listed as having recovered.

For full information on COVID-19 in Kentucky, visit kycovid.gov.