The federal government is ordering a nationwide halt on evictions through the end of the year.

The Centers for Disease Control and Prevention is issuing the eviction ban under the authority of the Public Health Service Act. According to an online draft, the CDC is issuing the temporary moratorium on evictions to prevent the spread of COVID-19, which the agency says “presents a historic threat to public health.” The order does not stop foreclosures on home mortgages.

For the full text of the order, click here.

Gov. Andy Beshear issued a statewide moratorium on evictions during the early days of the COVID-19 pandemic, but a group of landlords in Northern Kentucky had challenged the governor’s executive order in federal court. That case has been paused by the judge, Beshear said, due to the new federal order. According to wfpl.org, neary half the renting households in Kentucky—around 142,000—are at risk of being evicted by the end of the year.

The federal order does not relieve any tenants of their obligation to pay rent or stop landlords from charging late fees, penalties or interest.

Tenants must make a declaration to their landlord that they have applied for government assistance for rent or housing. Evictions for reasons other than nonpayment of rent will be allowed. The government says it will impose criminal penalties on landlords who violate the ban.

The CDC order doesn’t offer funding to either tenants or landlords looking to recoup unpaid rent, some of whom may be struggling to make their own mortgage payments.

At his Wednesday briefing, Gov. Beshear said he hadn’t seen the federal order yet, but he agreed with the CDC’s stated purpose for issuing it—to prevent evictees from gathering in congregant settings like a homeless shelter, where the coronavirus spreads like wildfire. The biggest outbreaks in Kentucky have all been connected to congregant settings such as long term care facilities and prisons.

“I think it’s important that people are in their homes,” he said.

The governor said he would make adjustments to the Healthy At Home Fund, but said his administration still intends to dedicate $15 million towards finding a resolution that will work for tenants and landlords.

Beshear was also asked about the statewide mask mandate. He said he expects to extend it past the Sept. 10 deadline.

The state has also issued new guidance for reopening schools which require masks to be worn indoors. Beshear said the guidance comes from watching other school districts that have reopened, both here in Kentucky and across the nation. He said in schools where students wear masks the spread of COVID-19 is less severe.

“It’s little more stringent, but it’s a sacrifice we have to make if we want to return to in-person learning,” Beshear said. 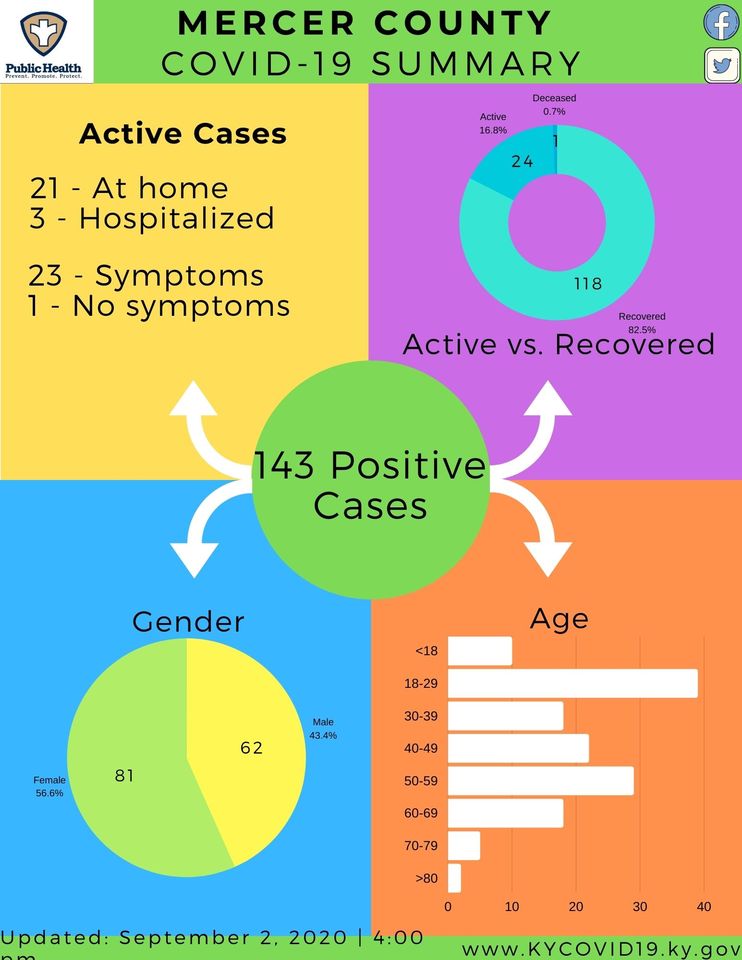 Gov. Beshear announced 816 new cases Wednesday, raising Kentucky’s total to 49,991. Of those new cases, 116 are children 18 and younger, with 18 of them age five and under. The youngest is only two months old.

In addition, 18 new deaths were reported Wednesday, raising Kentucky’s death toll to 966. The positivity rate—which is calculated on a rolling seven-day average–currently stands at 4.71-percent.

“Today we have a tough report all the way around,” Beshear said. “Thirty-six deaths in the last three days. That’s what happens when we have the number of cases that we currently have in Kentucky. Let’s make sure that we’re doing better and working even harder.”

According to the Mercer County Health Department, the local case count has risen to 143 with 24 active cases, three hospitalizations and one death.

Across the world, there have been over 26.1 million confirmed cases, with 865,658 deaths, according to worldometers.info. So far, over 18.3 million people have recovered.