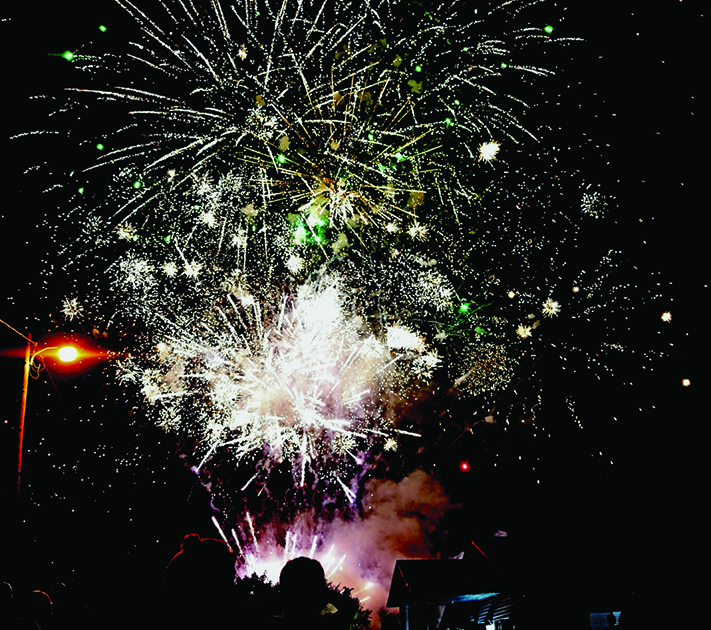 A young boy holds his ears during a fireworks show in Harrodsburg last year. Residents say they are tired of the incessant fireworks shows this summer. (File photo.)

Almost everybody loves fireworks on July 4.

Almost nobody likes fireworks on Aug. 4.

Dawn Raimondi, who lives on Walnut Street, said there were fireworks until a week and a half ago. Raimondi virtually attended the city commission meeting Monday to discuss what could be done to limit fireworks in the city. She said she understood fireworks on the Fourth of July, but she said it is disruptive with animals and children.

“I don’t understand why we allow that to happen in town,” Raimondi said.

According to city ordinances, fireworks can be fired until 10 p.m. on week nights and until 11 p.m. through the weekend.  Some cities—like Burgin—restrict fireworks to the week before and after Independence Day and while some of the commission members liked this idea, Commissioner Charlie Mattingly said it had to be equally enforced. Mattingly said some of the fireworks are brought into the state illegally. He also said if the fines for lighting fireworks after the cutoff time are $50 or less, they need to be made higher.

“We’ve got to look at penalties that fit the crime,” said Commissioner Scott Moseley. Moseley said they need to research the guidelines before taking any action

Raimondi said fireworks are set off on Larue and West Office Street. She called them the “big booms.”

Mayor Art Freeman said fireworks are a problem all over the city. On Beaumont Avenue, it sounds like a war going on, Freeman said.

The mayor suggested the commissioners meet informally to look at the codes and penalties and devise a timeline. He said they’ll also need to talk to the Harrodsburg Police Department to make sure it’s enforceable. Freeman told Raimondi they’d work on the issue over the next couple of weeks.

The city commission also talked with Joni Horn, chair of the Anderson-Dean Community Park board of directors. Horn said the park board had hired a new park director, Jeremy Turpin of Anderson County, an employee with that county’s parks department. Turpin is also giving up his position as a coach at Midway University to work at Anderson-Dean.

Horn said the board was also able to hire a program coordinator, Don Wilburn, a professional tournament director who has rented the fields at Anderson-Dean. Wilburn will host the tournaments, which will give the park 100-percent of the revenue instead of just the park rental fees. Horn said Wilburn’s $30,000 salary will be paid out of tournament revenues. Turpin will concentrate on maintenance and running the park while Wilburn handles tournaments. In addition, Wilburn will mentor Turpin to take over his duties after five years.

Commissioner Mattingly praised the job Horn and the park board are doing at Anderson-Dean, but he said he’s been asked by citizens about gatherings at the park such as the tournaments. Mattingly said they are concerned about kids at the park. Mattingly said he had visited the park last weekend and he had seen no one social distancing and many people were not wearing masks.

“People are concerned,” Mattingly said. He noted many of the events—including Oktoberfest—have been canceled, yet the tournaments are still allowed to happen. He asked if the park board was making sure people complied with state guidelines.

Horn said the park is in compliance with all guidelines and had submitted their reopening plans to the Mercer County Health Department. She said no one is allowed on the bleachers and people can sit as a family under the tent together. In common areas, lines to the bathroom and concession stands are marked off. She said they can only ask people to abide by the mask mandate.

“We are doing our part to enforce that as much as possible,” Horn said.

She said Gov. Andy Beshear, who attended tournaments with his family a few weeks ago, complimented the park on doing a good job.

“Really, I don’t care if the governor was here,” Mattingly said. “I don’t think you need to put that many people together, the young people.”

”Don’t you think we have some responsibility?” Mattingly asked.

• Agreed to sell Habitat for Humanity of Mercer County the property located at 122 Forsythe Street for $6,000.

Freeman said the revenue would allow the city to buy more abandoned properties. The mayor said the city had boarded up a house on Tabler Avenue. The mayor said three more houses are to be knocked down and four more are pending and the city is looking at six more homes. He said there are going to be a lot more empty lots in Harrodsburg.

“We’ve got some messes in town but we are making progress,” Freeman.

• Accepted the resignation of Mark Lee Harris from the Harrodsburg Fire Department effective Sept. 7. Harris will remain as a part-time firefighter contingent on hazardous duty.

• Suspended Patrolman Taylor Smith of the Harrodsburg Police Department for five days without pay due to violation of personnel policy based on recommendation of his supervisors. The commissioners voted to hire Michael Shewmaker as a full-time police officer at $17 per hour.

Amy Earlywine, supervisor of the city’s communications department, said she hopes the new position will allow them to retain and hire certified employees. Earlywine said it was included in the budget.

The next meeting of the Harrodsburg City Commission will be on Monday, Sept. 14, at 6 p.m.