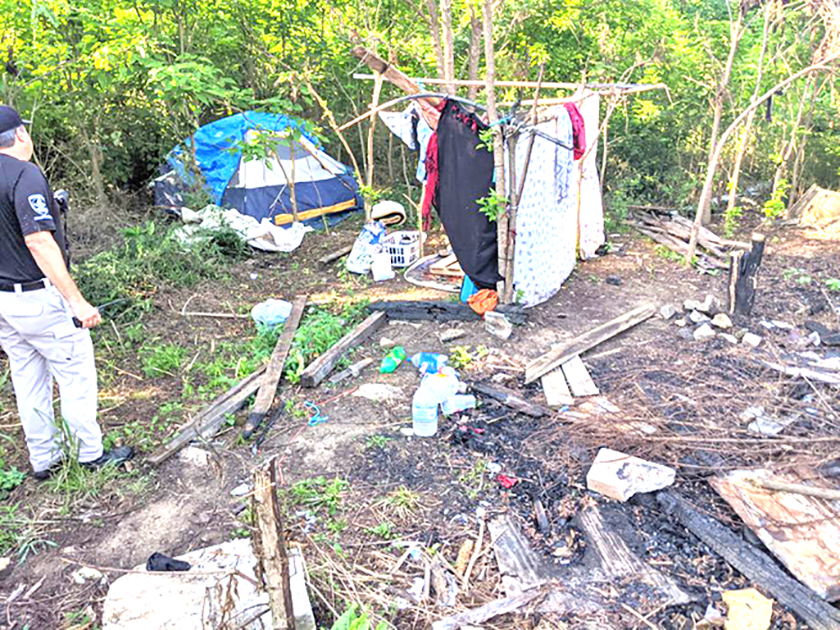 Image: Albert Moore
A living space for someone behind Lemons Mill Brewery, according to Albert Moore, superintendent of parks and streets for the City of Harrodsburg.

Homelessness in the City of Harrodsburg has been a hot topic at several city meetings since March. Some residents have voiced concerns about what they see as an increasing number of homeless people in Mercer County.

“We started the Homeless Taskforce to address concerns when it became clear this was an issue in Harrodsburg,” said Jack Coleman, city commissioner and taskforce chairman. “The goal was to get everyone involved into the same room to identify the issues and try to come up with solutions.”

Coleman said the taskforce has met several times over the past several months.

“Harrodsburg has several organizations that provide food, clothing, money… basically everything any person could need,” said Coleman. “We are close to being all on the same page when it comes to these issues.”

“It is important for us all to work together in our efforts,” said Coleman. “We already have a system to identify if someone is double dipping, but we need to require the same accountability for services as well.”

The most recent meeting of the Homeless Taskforce was attended by Robert Conway, commissioner of State Parks and colonel of the state park rangers.

Conway had seen emails from Old Fort Harrod State Park about the numbers of homeless overnighting at the park and the damage they caused.

“I have a big heart and am a church member,” said Conway. “I care about these folks.”

Conway and the other Taskforce members visited the homeless camps near Fort Harrod.

“There were about 20 or so people, many with cars staying in the back at the picnic shelter and around,” said Conway. “Balancing the needs of the citizens, visitors and park with the homeless left one conclusion: we need to enforce the rules already in place. Meaning there is no camping and the park closes at dusk.” 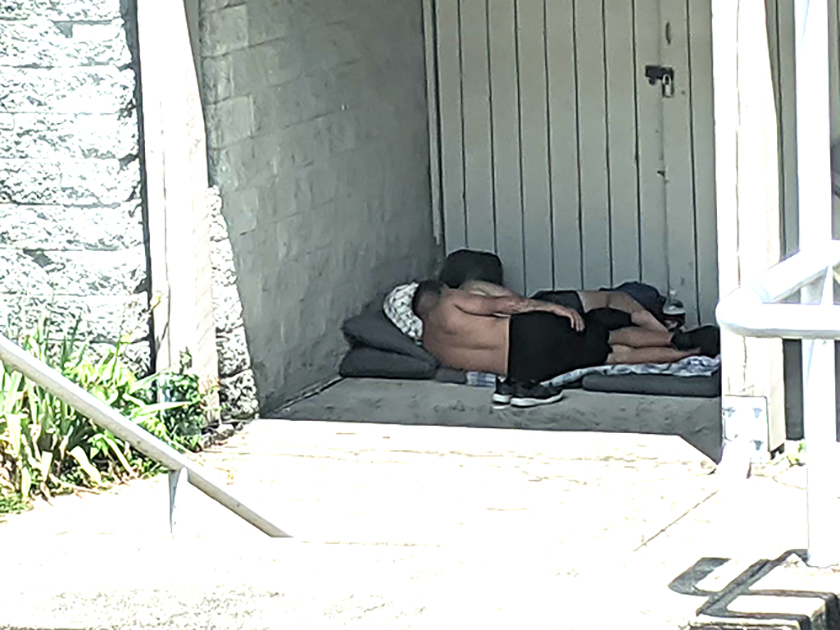 Image submitted by Albert Moore
Two people found sleeping at Old Fort Harrod State Park. The damage left from those living at the fort forced the closure of the park at dusk with enforcement of the no camping rule.

Other members of the taskforce noted that once the fort closed to the homeless it would lead them to other areas of town.

“One closure leads more of them somewhere else like West Lane, Olde Towne or Young’s Park among the many other places in town the homeless are congregating,” said Jill Cutler of the Mercer Chamber of Commerce.

Albert Moore, superintendent of streets and parks for the City of Harrodsburg, says he spends at least three days a week cleaning up Olde Towne Park on Main Street.

“I come into town at 5 a.m. to clean the regular hot spots like behind Lemons Mill and Olde Town Park,” said Moore. “I am trying to get to know the people as well. Offer them help and find out why they are here.”

Moore said there is a lot of trash and damage left behind on a regular basis from people sleeping or living on the streets.

“Some have tents, others find places with alcoves to sleep,” said Moore. “Winter is coming and those sleeping outside will try to find shelter inside.”

The dilapidated houses taskforce has torn down two abandoned houses this month but Moore says there are still several more places that need attention.

Moore said Tobie Reeser-Sherrow, the health education coordinator for the Mercer County Health Department, recently rode with him for his daily clean ups and checks.

“It was an eye opening experience,” said Reeser-Sherrow. “I have lived in Harrodsburg my whole life and thought I knew everything in town.”

During the ridealong, Reeser-Sherrow said she saw parts of Harrodsburg she never knew existed.

“The thing that stuck out the most is that you feel like you are very aware of the problem when you see a few people who are living on the streets,” said Resser-Sherrow. “The ridealong showed me a whole encampment I never knew exsisted.”

Mercer Transformation, which runs a feeding program sees about 40 people for lunch.  They have helped some get into rehab and others to get jobs according to Bret Chamberlin, Mercer County jailer.

Others are seeing the ravages of drug abuse and mental health issues.  Over half a million Americans are homeless, according to endhomelessness.org, with 4,079 people in Kentucky being homeless. However, it can be hard to qualify.

The Christian Life Center serves an average of 25-30 homeless on the street every month according to Assistant Director Beth Bowling.

“Although we serve 200 families, there is a difference between those who do not have an address and those who live on the street,” said Bowling. “There are over 100 people who are defined as homeless in Mercer County but the number living on the street is significantly less.”

Experts have devised  categories: chronic homelessness, which involves people with disabling conditions; episodic and transitional homelessness, which usually involves younger people; and hidden homelessness, which involves people temporarily living with others, including children. Among the issues that lead to homelessness include a lack of affordable housing, unemployment and mental health and substance abuse issues. In the end, many people do not have access to the resources that help get them  through difficult times. A 1995 study commissioned by the National Alliance to End Homelessness found that up to 50-percent of foster youth were homeless within 18 months of aging out of the system. The taskforce plans on holding at least one more meeting before they call for a town hall discussion.