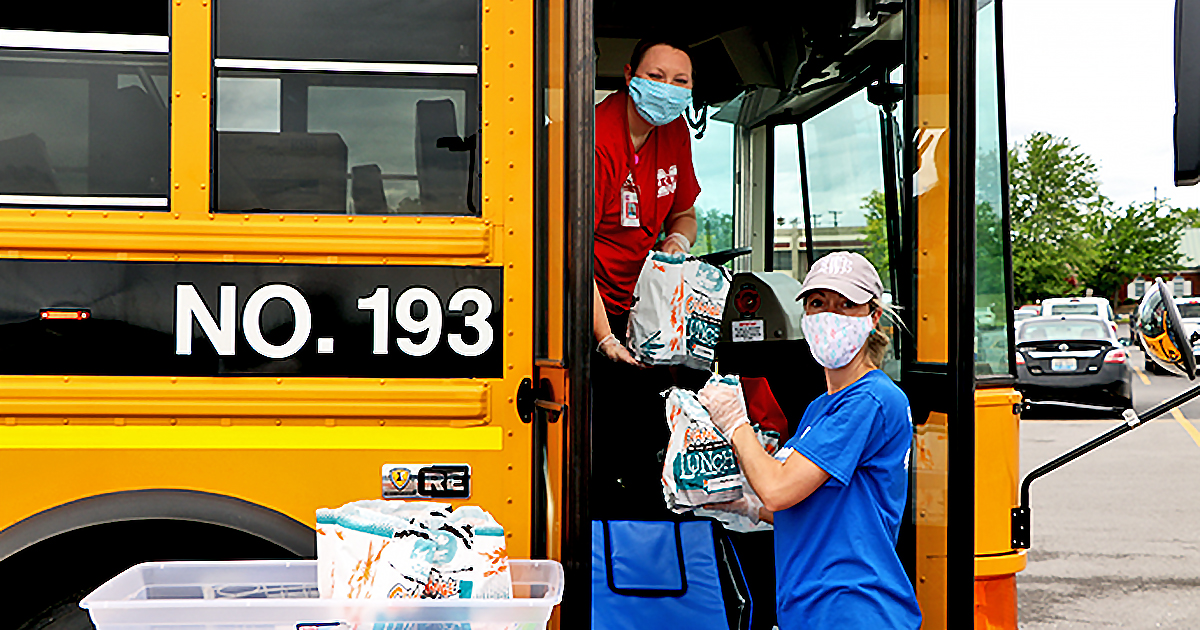 The Harrodsburg Herald/Jennifer Marsh
Tara Ennis and Brenna Wilson handed out lunches this spring. Mercer County schools hope to use the buses as traveling hotspots, which will allow children to access online assignments. The school board has voted to delay in-person instruction until Sept. 28, following the governor’s recommendation.

Editor’s note: This story has been edited to more accurately reflect what happened at the meeting.

The Mercer County Schools will hold off on in-person instruction until Sept. 28. Online instruction will begin Sept. 3.

The Mercer County Board of Education held a special-called meeting on Thursday night. The board, which is currently down to four members, split on the vote, with Chairman Randy Phillips and Bobby Walden voting no on delaying in-person instruction while Billy G. Montgomery and Larry Yeager voted yes. Superintendent Dennis Davis, who had earlier recommended to postpone in-person instruction, made the final call.

“This is as hard as it gets,” Davis said after the vote. He said he would start contacting parents on how to get Chromebooks and other information Friday.

On Monday, Gov. Andy Beshear asked Kentucky’s schools—both public and private—to delay in-person instruction for at least six weeks because of the recent spike in COVID-19 cases in Kentucky and across the U.S. The Burgin Independent Board of Education voted Wednesday night to begin virtually.

Hadden Dean, the attorney who represents the Mercer school board, said the governor had issued a recommendation, not an order, to stop schools from reopening. While some of Kentucky’s biggest school systems announced they were opening with virtual learning even before the governor’s recommendation, some schools, including Danville Christian Academy, reopened with in-person instruction. At yesterday’s briefing, Beshear said he would not force schools to postpone reopening via executive order. He said he would act only if there was a proven threat to people in the schools and no action had been taken to prevent it.

Dean said guidance from the Centers for Disease Control and Prevention advises school administrators to consider not just the risk presented by COVID-19, but also the possible harms to children caused by school closings–to their social, emotional and behavioral health as well as their economic well-being and academic achievement.

He said there are compelling arguments made by reputable experts on both sides of the issue.

“At this stage, you don’t know which one’s right or wrong,” Dean said.

As to legal liability, he said as long as the board relies on resources that are objective and germane to the situation, he said it would be difficult to attack the board’s decision.

The board also heard from Cathy Akins, the interim director of the Mercer County Health Department, who talked about contact tracing. Akins said the health department has three contact tracers working through the Kentucky Department of Public Health. Akins said the tracers reach out to the infected and try to learn about close contacts—people the infected have come into contact with for longer than 15 minutes. She said those who are infected are isolated for 10 days while close contacts are asked to self-quarantine for 14 days. They are monitored for possible changes in symptoms. Getting tested won’t necessarily tell who is infected, depending on when the test is administered. Akins said it can take 14 days for someone to have enough virus in their system to test positive.

Before the vote, board members asked repeatedly about internet service. There are many places in Mercer County that still do not have reliable internet access. Davis said the district would continue using hotspots they had set up in the spring and have discussed setting up hotspots on buses, which have also been used to distribute food. This year, children picking up food will be able to download their lessons online and submit their assignments the next day.

Several teachers also spoke to the board. They all said they would love to hold in-person classes again, with one teacher calling interacting with the kids “the best part of the job.”

But some of the teachers said they also had family members with health issues that make them susceptible to COVID-19-related complications. And they all worried how they would be able to teach as well as sanitizing classrooms and enforcing social distancing.

Davis said he too wanted to get kids back into school. He said online instruction is no substitute for in-person instruction.

“If the virus wasn’t spiking, we wouldn’t be having this conversation,” he told the board. He said no matter what decision they made, they would criticized for it.

“It will be impossible to know if we overreacted,” Davis said. “It will be quite apparent if we under-reacted.” 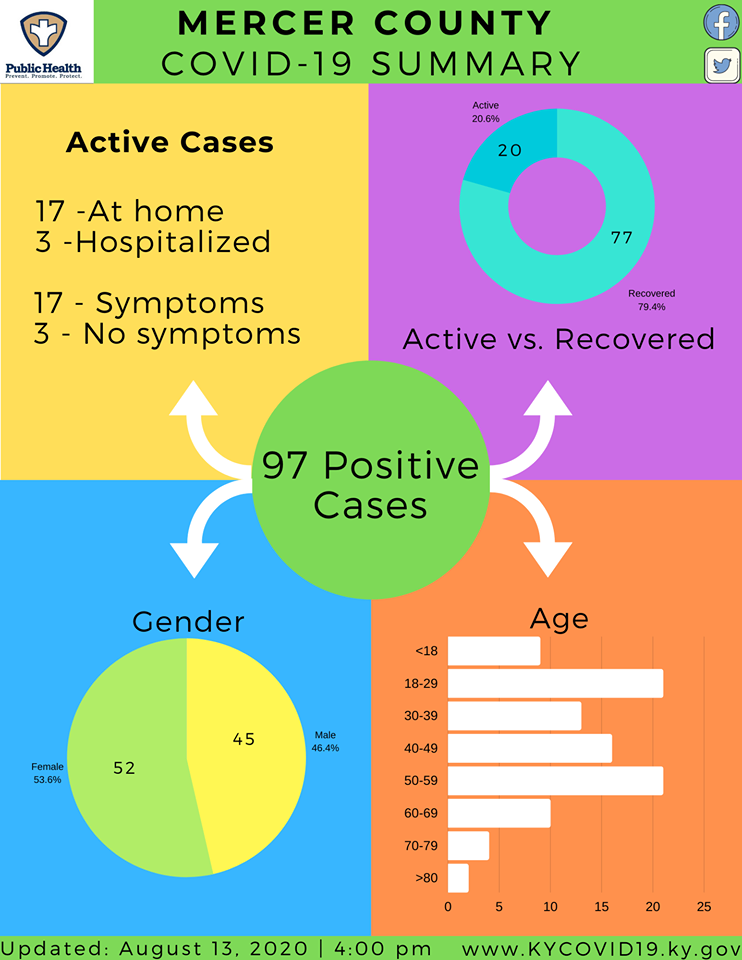 On Thursday, Aug. 13, Gov. Beshear announced 785 new cases. Minus duplicates, that brings Kentucky’s total to 37,686. The state’s positivity rate is 5.67 percent, based on a seven-day rolling average. In addition, the governor announced six people die, raising the commonwealth’s toll to 791. So far, 8,965 Kentuckians–nearly 24-percent of those infected–have recovered.

Across the world, there have been over 21 million confirmed cases, with 752,729 deaths. So far, nearly 14 million people have recovered, according to Worldometers.info.

Locally, there have been 97 confirmed cases, according to the Mercer County Health Department’s Facebook page. There are currently 20 active cases, with three people hospitalized and three people showing no symptoms. So far, no one from Mercer County has died because of the coronavirus while 77 people have recovered.