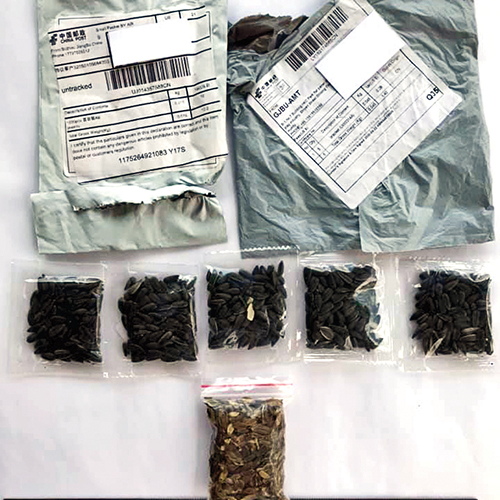 Image: Kentucky Department of Agriculture
Recipients of unsolicited seeds may have more to worry about than invasive species. Their personal information may be in the hands of online scammers.

Officials believe the mysterious packs of seeds being received all over the country—including here in Kentucky—are part of an online scam.

Last week, the Kentucky Department of Agriculture warned about unmarked seed packets being shipped unsolicited to residents. According to the KDA,  several Kentuckians had received the seed packets by mail. While authorities warned the seeds might be an invasive species or infected with an illness in order to undermine American agriculture, Osama El-Lissy of the Plant Protection program of USDA’s Animal and Plant Health Inspection Service said in a statement that packages were filled with ordinary seeds. El-Lissy said 14 different species of the seeds have been identified, including mustard, cabbage and morning glory as well as herbs like mint, sage and lavender and flowers like roses and hibiscus. Authorities now believe the seeds are part of a brushing scam, in which online sellers improve their ratings through fake orders.

The Better Business Bureau is reporting an increase in brushing scams. The scammers mail lightweight packages such as ping pong balls and seeds— which are inexpensive to ship—to people who did not order the merchandise. According to the BBB, scammers—usually foreign, third-party sellers—create fake customer profiles with real names, then use the false positive reviews to drive sales.

The BBB also reports that porch pirates may use other people’s mailing addresses and accounts, then steal the packages when they arrive.

While the seeds have not proven to be dangerous, the USDA encourages recipients to contact their state plant regulatory official or Animal and Plant Health Inspection Service (APHIS) state plant health director. They also advise washing hands after handling the seeds as a precaution. Recipients should hold onto the seeds and the original packaging until contacted by KDA or APHIS. Under no circumstances should anyone plant the seeds.

The real danger for most recipients is the possibility their personal information has been compromised. The BBB advises recipients to keep a close eye on their credit report, bank accounts and credit card bills. They also recommend that recipients change their online passwords.

They should also notify the retailer. Brushing and fake reviews are against Amazon’s policies, so contact Amazon Customer Service if the product appears to come from Amazon. They will investigate and take action, the BBB said. Go directly to Amazon’s website to get their contact information. The company also takes security seriously and encourages customers to report fraudulent purchases or other security issues. If the preference is to contact them by phone; be cautious of searching for support phone numbers.

The Federal Trade Commission says you have a legal right to keep unordered merchandise.