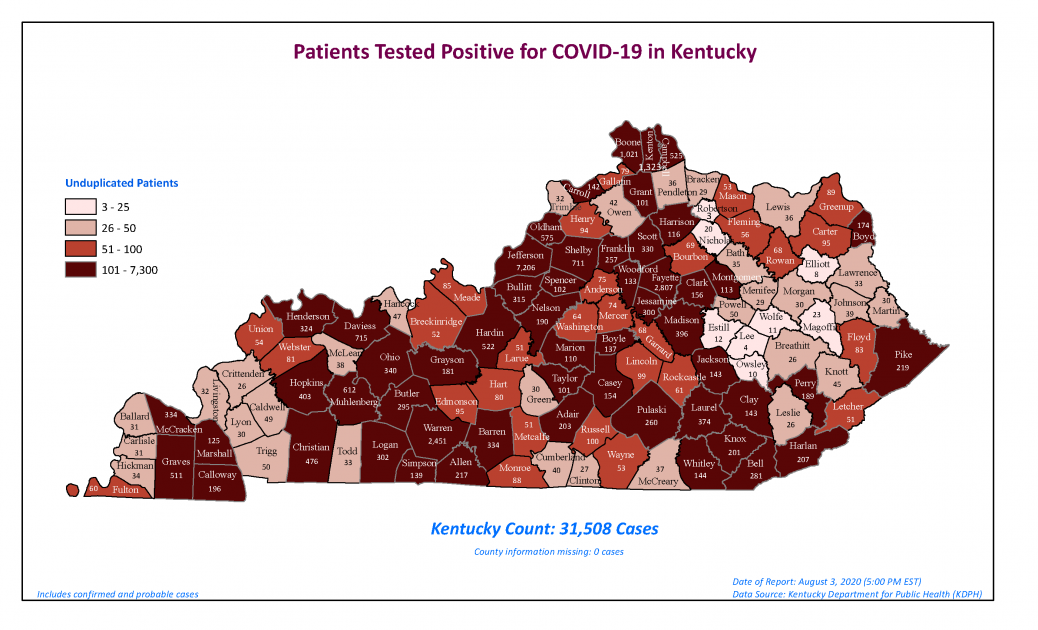 With the number of new COVID-19 infections across Kentucky declining, Gov. Andy Beshear said his mask mandate—and the other actions the state has taken—appear to be working.

At Monday’s briefing, Beshear announced 323 new cases, continuing the downward trend over the past few days. On Sunday, he announced 463 new cases while on Saturday he announced 572 new cases. So far, 31,508 have been diagnosed with COVID-19, according to the state.

While cautioning the numbers may be down because some labs do not provide results to the state on Sunday, Beshear said he thinks Kentucky is on the path to decreasing the number of new infections.

“These facial coverings are working,” the governor said Monday.

Beshear said he will have to look at the rest of the week before making any decisions, but he expects the mask mandate, which has been in effect since July 10, will be continued past the initial 30 days. He said there may be an increase when the University of Kentucky welcomes students back. Asked by a reporter if the state was offering new guidance for colleges, Beshear said while colleges are submitting their reopening plans, he did not think the state had any further recommendations.

He said he hopes to provide more flexibility for restaurants, who have had to reduce their indoor seating capacity to 25 percent, over the next week. Beshear said he is encouraged by the number of restaurants who are looking to expand or add outdoor dining areas. He said he is also looking at bars being able to reopen, but said there may be a curfew, as that has been effective in other states.

Kentucky—which perennially ranks near the bottom of American states for health, including drug deaths, obesity, physical activity, smoking and other behaviors, according to America’s Health Rankings—seems to have escaped the outcome experienced by other states. For instance, even though Louisiana has only a slightly larger population than Kentucky—4.6 million to 4.4 million for Kentucky, according to the United States Census Bureau—Louisiana has had three times the confirmed cases—118,773 cases to Kentucky’s 31,508—and over five times the deaths–4,027 to Kentucky’s 744. According to USA Today, Louisiana, which is experiencing a second wave of infections even worse than the first, leads the nation in COVID-19 cases per capita, outpacing Florida, Arizona and New York.

While Gov. Beshear said he is encouraged by the recent downward trend in new infections, he asked people to get tested. He said he and his staff are tested once every two weeks, and he recommended restaurant workers do the same.

The governor also unveiled MaskUpKY, a statewide public service campaign aimed at encouraging the use of masks, along with a new hashtag, #MaskUpKY, to promote facial coverings on social media.

“We know that if we can get the majority of Kentuckians to wear a mask when you go in public, we can make a major difference,” Beshear said. “If we want to get our kids back in school, reopen our economy, keep each other safe and get to a new normal, we need every Kentuckian to wear a mask or facial covering. It’s that simple.” 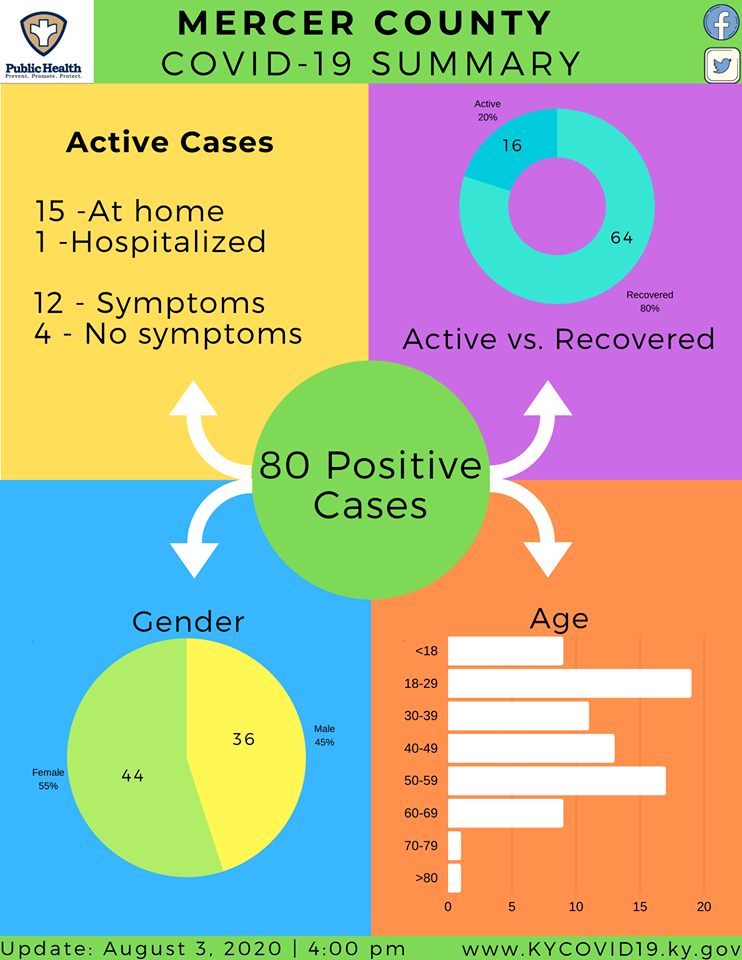 At Monday’s briefing, the governor announced the positivity rate, which is based on a seven-day rolling average, is 5.18. In addition, he said at least 8,335 Kentuckians have recovered from the virus. He said there were two new deaths, raising Kentucky’s toll to 744.

Across the globe, there have been over 18.3 million confirmed cases, with 11.6 million people having recovered and 695,459 have died, according to worldometers.info.

Locally, there have been 80 confirmed cases of COVID-19, with 16 of the cases still active, according to the Mercer County Health Department Facebook page. Of the 16 active cases, 12 have shown symptoms, and one has been hospitalized.