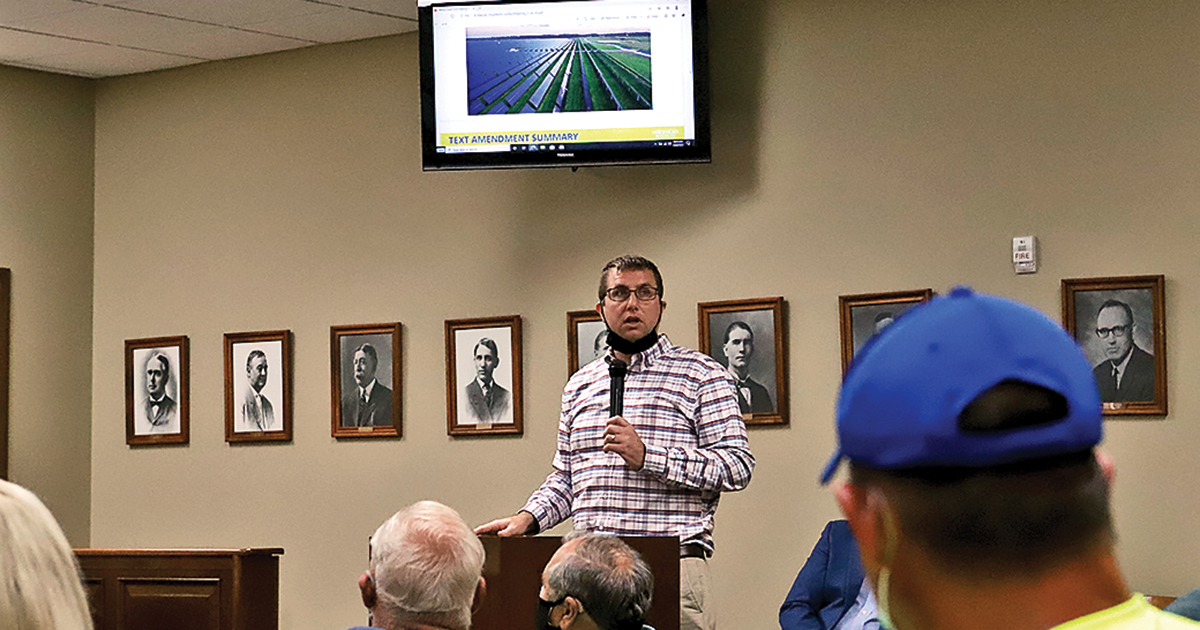 The Harrodsburg Herald/Robert Moore
Drew Gibbons of Savion answered magistrates’ questions about a text amendment that would allow a solar farm to be built on agricultural land.

Developers appeared before the Mercer County Fiscal Court Tuesday to  brief magistrates on a proposed amendment to the county’s zoning code and to answer their questions about a planned solar farm.

“Folks, this is where the world is going and there is no going back,” Edelen said.

Edelen said some question whether the $150 million project would generate revenue locally. Edelen said the development would pay $260,000 to the county a year with no depreciation over the life of the project.

While noting Mercer already has one of the largest solar facilities in Kentucky, he called the  new project a precondition to modern economic development. It could even draw a data processing center, he said. He said other communities are lining up for renewable energy projects.

“Do not advertise to the world that this county is closed for business,” Edelen said. He said the developers, who have already held one meeting with neighboring property owners and were interested in hearing more imput from the community.

“We’re trying to do the right thing,” he said.

Drew Gibbons, senior development director and project manager at Savion, the other developers for the solar farm, said the process begins with the fiscal court approving a text amendment to the zoning ordinance which would allow solar farms as conditional uses in some agricultural districts. Once that is approved, Savion would assemble an application for the conditional use permit.

The board of adjustments and appeals would vote on the conditional use permit, he said. In addition, Savion has to win state approval for the project, which could take at least eight months. If all goes well, the project could be operational by 2022, he said.

The proposed solar farm would be capable of generating 175 megawatts Gibbons said. It would be located on the old Wilkinson farm. The site is 1,900 acres, with 1,200 acres for the project. He said there would be no need for predrilling or concrete footings. Once completed, the project would have about half a million panels.

The proposed location is flat and open and close to Lexington and Harrodsburg as well as high power transmission lines.

Gibbons said the developers had already met with some neighboring property owners. In addition, Savion has created a Facebook page and website. They are planning more public meetings, perhaps virtually. They are still trying to figure out a way to hold an in-person meeting with current COVID-19 restrictions, Gibbons said.

Asked about the local economic impact, he said the project would generate up to $9 million in revenues for the county over 35 years. Gibbons called it a low impact project which generates no noise and no emissions. Payments would not depreciate or decrease.

He said the project would be 300-600 feet from the nearest residence. Gibbons said the biggest concerns are about the visual impact.

He said Savion is working on pushing back from the residential area at the southeast and drafting a landscaping plan, placing a vegetative screen in front of fencing

Tim Darland asked about the difference between a text amendment and zoning change.

Gibbons said the current ordinance does not allow them to even apply for a permit. He said the text amendment would not allow the project to proceed without county review and permission.

Magistrate Ronnie Sims asked about a buffer between homes and the solar farm.

“How visible is that going to be?” Sims asked.

He said engineers are working to move back the panels so they won’t impact the view. They are also creating simulations of the view with vegetative screening.

He said once the panels were up, people will barely notice them, although some in the crowd who had gathered at the fiscal court meeting scoffed at the idea.

Commissioner Jackie Claycomb asked about a decommissioning plan. Gibbons said Savion would be willing to put up a bond for decommissioning the facility once it has reached the end of its usefulness.

Gibbons said solar farms are not built on spec. He said there is a customer lined up to purchase power from the solar farm, although he would not directly name the customer, saying those negotiations are confidential.

When Magistrate Dennis Holiday noted  utility companies don’t pay property tax, Gibbons said the developers and the county would negotiate an annual payment in lieu of taxes, which could generate as much as  $260,000 a year.

He said that, unlike the KU solar farm in Burgin, it would ultimately be in the county’s hands to decide if Savion had done a good job.

Judge-Executive Milward Dedman asked about public meetings. Gibbons said it depends on the county’s schedule. He said the developers would want to see the text amendment approved before holding another meeting. In addition, they would hold more public meetings when they submitted their conditional use permit application.

“I think it might make more sense to hold a public meeting when we have a permit application,” Gibbons said.

The fiscal court took no action. Judge Dedman said there will be a public hearing on the text amendment. He said he would distribute the findings to magistrates to consider.

Dedman said he wanted them to have plenty of time to review the information.

Mercer County Attorney Ted Dean reminded the magistrates that they are considering the text amendment only.

“This is not a vote for this specific project,” Dean said.

• Appointed Mike Riley to Anderson-Dean Community Park board to serve out the remainder of Bobby Smith’s term.

• Gave second reading to an additional anticipated truck license, which was not included in the budget.

• Gave second reading to additional carryover in all funds from 2019-2020 fiscal year.

• Approved the road department to purchase a bushhog for $4,950 from county equipment.

• Approved the $40 per diem for inmates at Boyle County Detention Center.

The next meeting of the Mercer County Fiscal Court will be on Tuesday, Aug. 11, at 10 a.m.