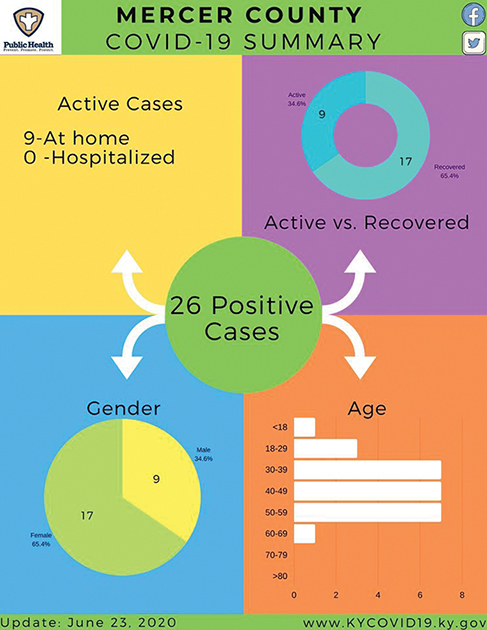 Mercer County has its first confirmed COVID-19 case in a young person.

According to the Mercer County Health Department, the latest confirmed case is a female under the age of 18. Close contacts have been notified, the health department said.

So far, there have been 26 positive cases in Mercer County, with nine of them still active. No one has had to be hospitalized yet, according to the health department. All nine active cases are recovering at home.

During Wednesday’s briefing, Gov. Andy Beshear announced 229 new COVID-19 cases, bringing Kentucky’s total to 14,141 cases. There was one new death, the governor said. So far, 538 Kentuckians have died as a result of COVID-19 while 3,706 people have recovered, according to the state.

Across the globe, there are over 9.4 million confirmed cases of COVID-19, resulting in 483,649 deaths. According to worldometers.info, over 5.1 million people have recovered worldwide so far.

In the U.S., which remains the epicenter of the COVID-19 pandemic, there are over 2.4-million confirmed cases, resulting in 123,174 deaths. So far, a little over 1-million Americans have recovered.

Kentucky is one of the many states that have begun reopening, even as the nation is still averaging over 25,000 new cases every day. While cases have remained relatively steady here in Kentucky, they are surging in 29 of 50 states, with many states recording higher numbers for confirmed infections than in April. According to a CNBC analysis of data provided by Johns Hopkins University, the nation’s seven-day average has increased 30-percent since a week ago.

On Monday, Kentucky restaurants were allowed to reopen at 50-percent capacity for indoor dining. On Monday, June 29, the state will allow gatherings of 50 people or more. That includes wedding venues. For the state’s new guidance on restaurants, bars and public gatherings, visit governor.ky.gov/covid19.

Dr. Steven Stack, Kentucky’s commissioner of public health, said during Monday’s briefing that using face masks and getting tests are crucial in keeping the virus under wraps.

“Despite reopening, there are small things we have to do until we get a vaccine or treatment,” Stack said. “Continue to socially distance, wear face masks, wash hands frequently and do temperature screenings at work and places of businesses.”

While some have attributed the increase in new cases to increased testing, Stack said COVID-19 is a dangerous disease.

“We are seeing in other states dramatic surges in virus cases,” he said. “The increase is not just about testing more, it’s about hospitals needing to admit more people, and having to treat more people,” he said.