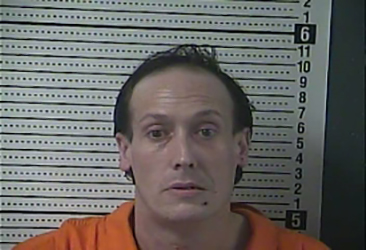 Police say a driver traveling down the wrong side of the road almost crashed into a police car last week.

On Monday, May 18, the Harrodsburg Police Department received a complaint about a vehicle traveling north in the southbound lane of Danville Road

Patrolman Blake Darland parked his cruiser in the middle of the road with lights and sirens blaring but the driver passed by, nearly hitting Darland’s cruiser.

According to an HPD Facebook post, Darland pursued the vehicle for approximately another mile while the driver swerved all over the roadway, still driving in the wrong lane.

Police determined he was under the influence and arrested him.

During a search of his vehicle, investigators found a substance they suspected to be heroin.

Hayes is being held at Boyle County Detention Center on a $10,000 bond.

He has been charged with reckless driving, driving under the influence (third offense), 1st-degree possession of heroin, 1st-degree wanton endangerment of a police officer and driving on a DUI-suspended license.

He was also served with Taylor County warrants for failure to appear, 3rd-degree burglary and shoplifting. Hayes has a court appearance scheduled for Wednesday, May 27, according to the jail website.