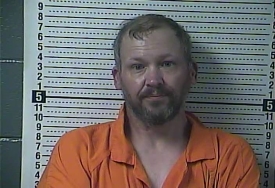 A Harrodsburg man has been arrested for allegedly stealing more than $20,000 from Lowe’s stores across the Bluegrass.

On Friday, May 8, Thomas Willard Freeman, 42, of Burgin, was served with three warrants for shoplifiting by Dep. Sean Brown of the Mercer County Sheriff’s Office. Two of the offenses occurred on April 6 while one occurred on April 2, according to the Boyle County Detention Center.

Later, at Freeman’s residence, investigators found computer equipment where he was selling items online, making false vehicle registration plates to conceal the identity of the vehicles he was using and more merchandise stolen from Lowe’s.

Police believe he sold stolen goods online and used forged vehicle registrations to help cover his tracks.Freeman is believed to have shoplifted merchandise from seven Lowe’s during the last three months, according to the MCSO.

Brown made the arrest in partnership with the Lexington Police Department. Freeman was released on his own recognizance, according to the jail website.