COVID-19 Update For Tuesday, May 5 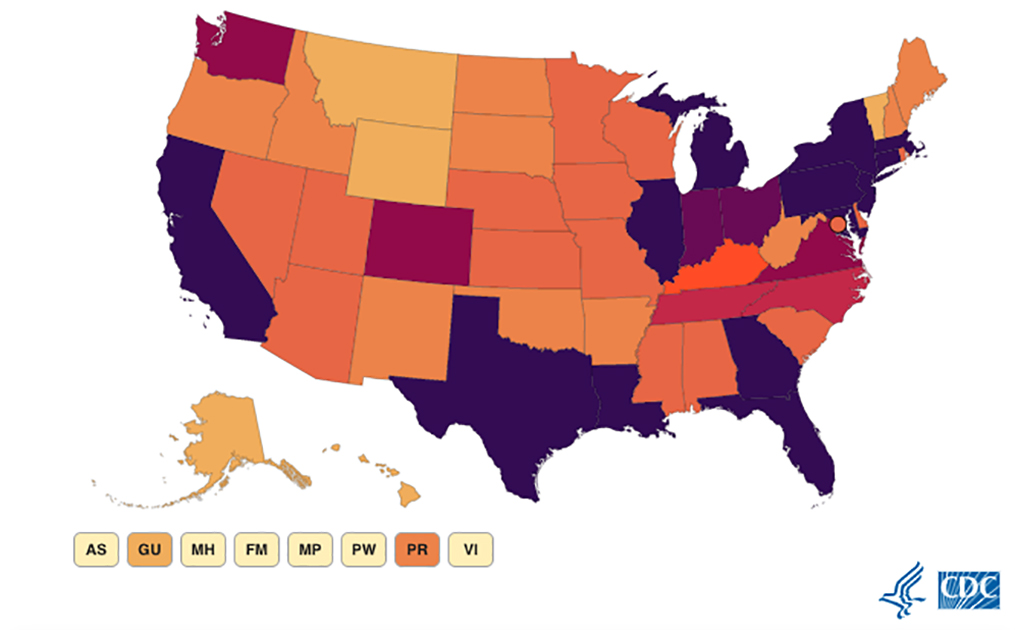 The Commonwealth of Kentucky recorded 625 new cases of COVID-19 Tuesday, the highest increase since the beginning of the pandemic. That’s nearly twice the previously recorded high of 322 back on April 24.

“They’re high, but they’re high for a reason,” said Gov. Andy Beshear, who has insisted the number of new cases has plateaued. Beshear said the increase not just because of increased testing, but because of an increased focus on testing vulnerable populations, including at prisons and long-term care facilities. He said 309 new cases are at Green River Correction Complex in Muhlenberg County, where he ordered everyone to be tested, including inmates, staff and regular visitors. Many of the confirmed cases are asymptomatic, he said.

At the state’s long-term care facilities, 828 residents and 331 staff members have been diagnosed with COVID-19. There have been 152 deaths, with two of those being staff members.

Beshear also noted there were 80 new confirmed cases Sunday, when many labs are closed. Each Tuesday they have seen higher numbers, the governor said.

He was asked why the state was continuing to reopen when there had been such a big increase in new cases. The guidelines established by the White House call for a reduction in cases over 14 days.

“We don’t appear to be meeting the goals you laid out,” the reporter said.

The governor said the state has significantly increased its testing capacity. There are now 18 drive-thru testing sites across Kentucky. But more importantly, the state has been able to secure the equipment such as swabs necessary to perform the tests.

Beshear said the state has increased testing capacity to 30,000 week, which was larger than the rate requested by the White House.

In addition, the state is not opening all at once. On May 11, phase one begins, in which businesses—including manufacturing and construction firms, car and boat dealers, dog grooming and boarding providers, professional services and horse racing tracks—can reopen so long as they follow certain recommendations. Phase two—which includes restaurants and childcare services—is not scheduled until June at the earliest.

The increase in testing capacity plus opening gradually in phases will allow the state to reopen.

“I believe we can safely engage at phase one,” Beshear said.

Part of reopening is reopening safely is contact tracing, he said. The governor said the state will award the bid for contact tracing next Friday. He said he believes local health departments can handle the load of contact tracing for the first week, but said it was not an ideal situation.

While polling finds the majority of Americans support the pandemic lock-down, the governor faces considerable pressure to reopen Kentucky’s economy even faster. He was asked about a demonstration being planned by state legislators demanding an immediate reopening.

Beshear said he supports protestors’ right to dissent, but asked them to observe social distancing guidelines.

“Make sure you don’t put people at risk,” he said.

As of May 5 at 5 p.m., 1,603 had been hospitalized, with 347 still hospitalized and 685 in intensive cared, with 189 still in ICU. Beshear said 2,058 have recovered.
Across the world, there are currently 3.7-million confirmed cases of COVID-19, according to Worldometers.com. There have been 257,850 deaths while a little over 1.2 million people have recovered.

Benton said claimants can submit last year’s wage history to calculate benefits. He said they are informing claimants via email.

With Kentucky’s reopening, many furloughed employees are going back to work. Benton said employers can report return to work dates for their employees to the state. There are exceptions for people caring for dependents or who are in at risk category because of age or health issue.

He said the state is also mailing applicants who are still waiting for unemployment insurance from March. Benton said 95-percent either said they quit or were fired. He said the state is emailing all claimants to inform them they can modify their claims that their reason for being out of work is COVID-19 related.