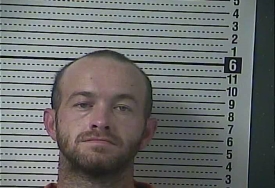 A Harrodsburg man is in jail after leading police in Boyle County on a wild chase, which sent one officer to the hospital for treatment.

On the evening of Friday, April 24, a Boyle County sheriff’s deputy tried to stop a white Ford pickup on Main Street in Danville.

The driver refused to stop and sped away, pursued by deputies and officers from the Danville Police Department.

According to a press release by the Boyle County Sheriff’s Office, the fleeing driver ran through several stop signs, red lights and traveled the wrong way down a one-way street.

Dep. Kody Cloud of the BCSO tried to use his cruiser to stop the chase, and became entangled with the pickup, which accelerated and dragged Cloud’s cruiser with it, before crashing into a residence on Apache Trail.

After a brief scuffle, police were able to remove the driver—identified as Austin Howell, 34, of Harrodsburg—from the truck. According to the press release, Howell tried to kick officers during the scuffle. One Danville police officer was transported to Ephraim McDowell Regional Medical Center to be treated for a non-life threatening injury.

After Howell was in custody, police found two containers with a crystal-like substance suspected to be methamphetamine inside the pickup as well as several used needles, according to the press release.

Howell is being held at Boyle County Detention Center on a $20,000 bond.