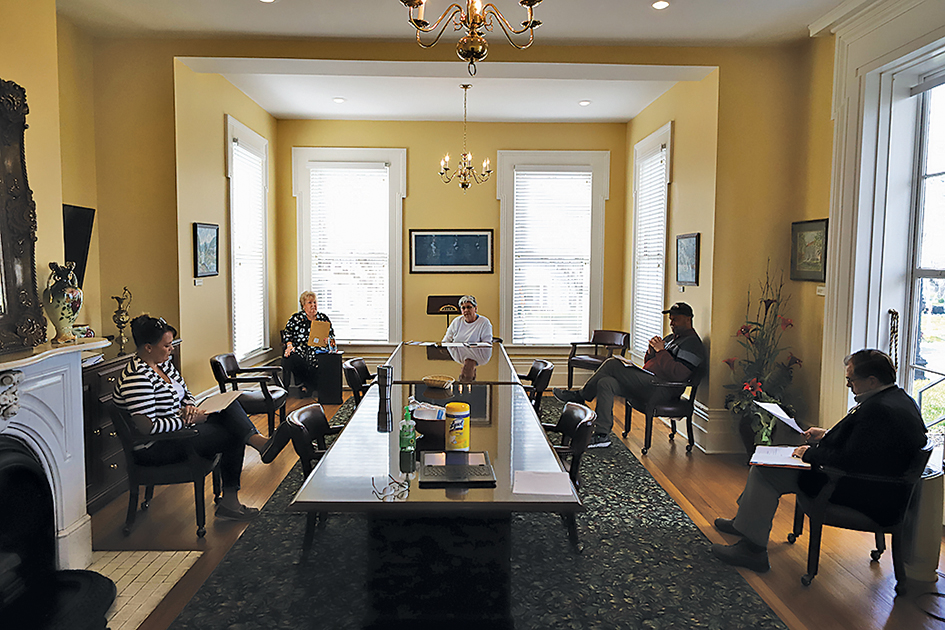 Kathryn Tuggle has resigned from the Harrodsburg-Mercer County Tourist Commission board of directors.

Tuggle has been accused, along with former board member JoEtta Wickliffe, of entering an employment agreement last year with Karen P. Hackett, executive director of the Tourist Commission, without the knowledge of the rest of the board.

The Harrodsburg City Commission voted to remove Wickliffe, who was the city’s representative on the board, last week. They have not appointed a replacement.

Tuggle’s resignation was effective April 10. She represented Mercer County on the board. The Mercer County Fiscal Court has not named her replacement

Board member Tim Kazimer nominated Inman. The motion was seconded by Chuck Dedman and passed unanimously. Kazimer was elected vice-chair. Inman and Kazimer will serve out the time remaining on the terms. Tia King Taylor will chair a nominating committee to appoint a new slate of officers. Dedman and Kazimer will also serve on the committee.

At last week’s meeting, the board of directors approved the decisions made at the special-called meeting on March 26.

Norrie Clevenger Currens, the board’s new attorney, said the agenda was for a special-called meeting, but the members had assumed it was a regular meeting.

“Out of an abundance of caution,” Currens thought it would be appropriate to revisit the decisions made at the last meeting, which include shutting down the office, laying off staff and hiring Currens as attorney.

“We need to go on record at a regular meeting that we approved these meeting,” Inman said.

Bob Gigliotti voted to approve the decisions and Kazimer seconded. The motions were approved unanimously, with Dedman abstaining. Dedman said he was in favor of every action the board took, but he abstained because he had not attended the meeting.

“That is going to take a big chunk of our reserve,” he told the board of directors. Inman said they had contacted the attorney general’s office for a ruling on the legality of the tax refund but had not received word.

“We are putting ourselves at significant risk if we start writing checks,” he said.

There are two issues that need clarification: whether it is legal to suspend the transfer of tax revenue and whether the Tourist Commission can refund the taxes previously collected. They have notified local restaurants through the mail to hold onto the taxes the businesses have collected until the attorney general’s office offers a legal opinion.

Kazimer was asked to work with the city to find a solution.

The board appointed members to committees to look at the Tourist Commission’s budget and to devise a marketing plan. In addition, they voted to contact the state auditor’s office about investigating the commission’s finances.

“We need to be on solid ground financially, and I don’t think we can do that unless we have an outside auditor come in and pick things apart forensically,” said Kazimer, who moved to contact the state auditor.

The Tourist Commission will have to pay for the state audit report. That report could not be used in the place of the one currently being performed.

The board opted to talk to Tourist Commission’s current auditor, Rick Downs, to see how far along he was with the most current audit. Downs has been ill, and the audit will not be completed until June.

While the audits performed by Downs meet legal requirements, Kazimer said the audit was not complete and he questioned the information that had been provided to the auditor.

Board members also wondered why Downs, who had previously worked on a one-year contract, had been given a multi-year contract.

“Something happened there that makes me feel uncomfortable,” said Inman, who said his experience was that new auditors were hired every three years.

The board tabled taking any other action on the audit until they had spoken with Downs.

The board discussed holding a special-called meeting this week but set no date. The next regularly scheduled meeting of the Tourist Commission will be on Thursday, May 21, at 9 a.m.