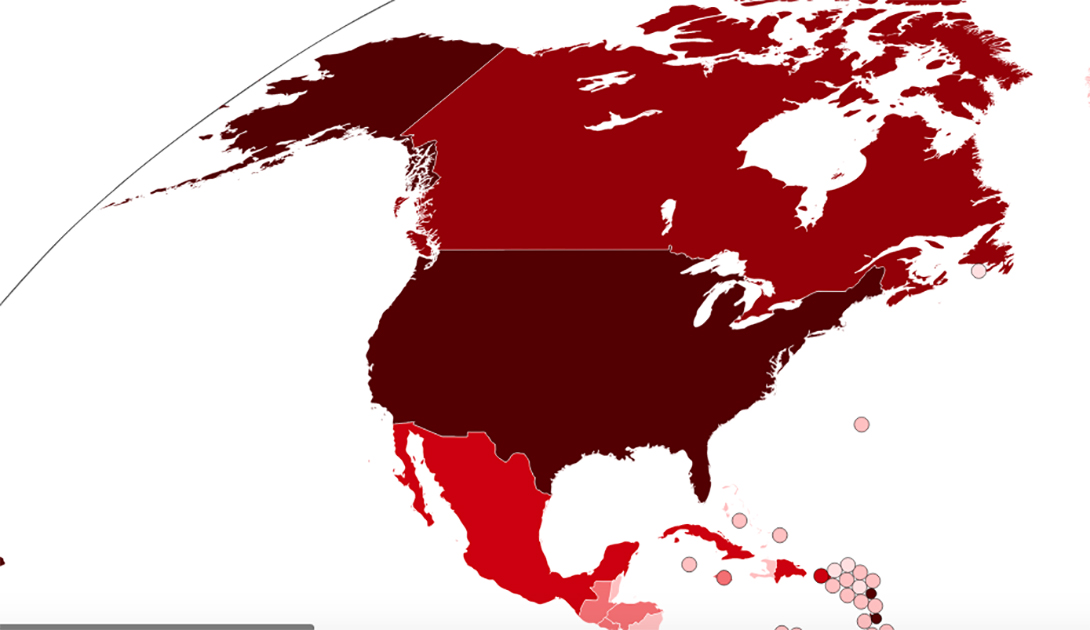 Image: Subsection of a world map of the COVID-19 outbreak. (Image: Pharexia  courtesy of Wikimedia Commons)

Kentucky is taking its first steps into reopening, starting with healthcare.

Gov. Andy Beshear said the state is finalizing plans to begin restarting some healthcare services on Monday, April 26. in addition, the governor is also lifting restrictions on who can be tested for the coronavirus.

While the services will become available again, how they will be conducted will be very different, the governor said. Patients won’t gather in the waiting room to be called to their appointment.

“The new regular waiting room is your car,” Beshear said.

In addition, there may be different designated waiting spaces within a facility.

The governor said he hopes to make even more services available in the coming weeks, next being outpatient and ambulatory procedures.

All elective procedures had been halted to free up medical services for the COVID-19 pandemic. Some healthcare providers, including Ephraim McDowell Health, which operates Ephraim McDowell James B. Haggin Hospital in Mercer County among others, have been forced to furlough workers.

Two weeks ago, McDowell announced that approximately 20-percent of more than 1,700 associates throughout the system were being temporarily furloughed. Many employees split their schedules, alternating working and collecting unemployment.

Beshear also announced he was lifting restrictions on who can be tested for the coronavirus. The state has so far restricted testing to those who were seriously ill, as well as healthcare workers, first responders, individuals 65 years or older and those who have chronic health conditions.

Now testing will be available to anyone with symptoms. This includes not just the drive-thru locations throughout the state but also local hospitals. Beshear said they hope to be able to deploy 20,000 tests per week. He said he hopes to be able to announce another partner coming onboard with testing later this week.

On Wednesday, Gov. Beshear announced 196 new confirmed cases. Minus duplications, there have been 3,373 confirmed cases in Kentucky so afar. According to the governor, 1,311 people have recovered.

National polls show that most Americans are concerned that the economy may be reopened too soon. However, considerable political pressure has been brought to bear in Kentucky and other states to ease restrictions put in place to slow down the spread of COVID-19. In addition to demonstrations and lawsuits, President Donald Trump has used Twitter to call on state leaders to allow shuttered businesses to reopen more quickly, even though most states are following guidelines established by the White House.

One of the benchmarks set by the White House is a continuous reduction in the number of new cases over 14 days. While Gov. Beshear said he believes coronavirus cases in Kentucky have likely plateaued, the state has not yet seen a decline in cases.

The benchmarks being used by the state to reopen the economy are based on the White House’s Guidelines for Reopening America.

During the second phase, the state will evaluate individual businesses’ ability to safely reopen. According to the press release, businesses closed due to COVID-19 may begin submitting reopen proposals via the online reopen application. The Department for Public Health will evaluate these proposals based on White House guidelines and other government benchmarks. This step will ensure that each business seeking to reopen is able to comply with public health protocols and CDC guidelines. If businesses have additional questions please email questions to HealthyAtWork@ky.gov.

Among other things, each business proposal is required to explain its ability to provide personal protective equipment to employees, adequate access to hand sanitizer and disinfectant and minimal direct contact between employees and the public.

Additional guidance for businesses seeking to submit a reopen proposal will be posted as it becomes available.