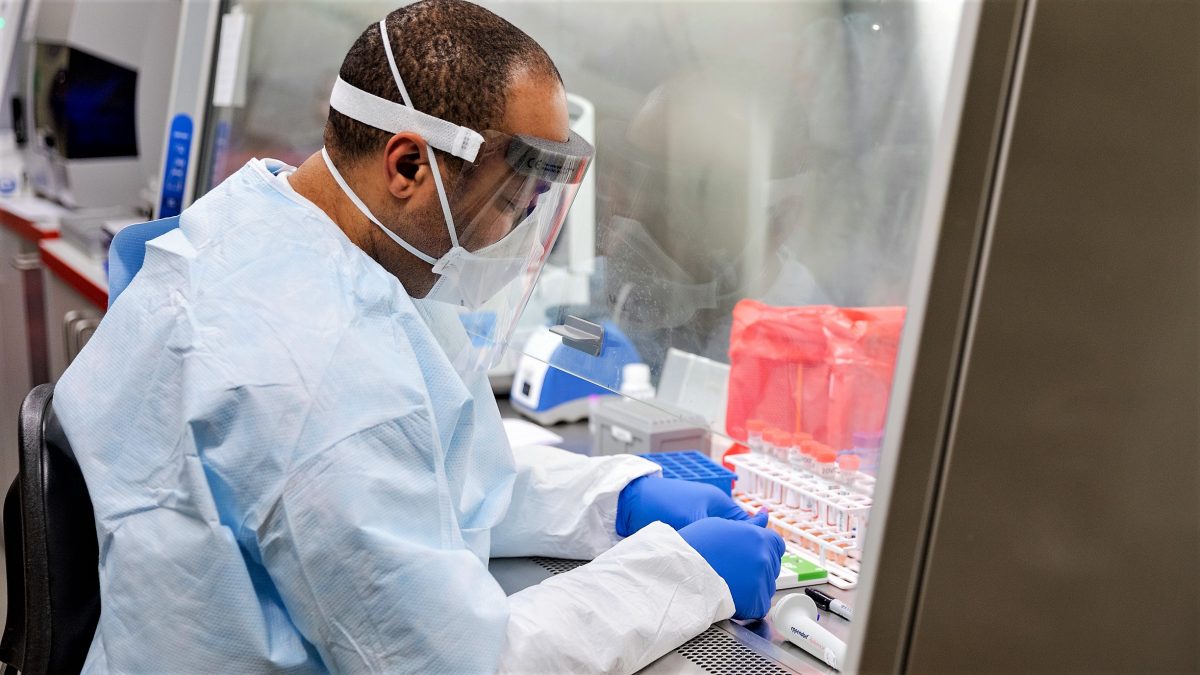 Pennsylvania Commonwealth microbiologist Kerry Pollard performs a manual extraction of the coronavirus inside the extraction lab at the Pennsylvania Department of Health Bureau of Laboratories on Friday, March 6, 2020. (Image: wikimedia.org.)

The Commonwealth of Kentucky is entering a partnership with the Kroger Company to provide drive-thru testing for coronavirus starting Monday.

Testing will begin Monday in Frankfort. Gov. Andy Beshear said he hopes to announce another location this week and two more next week. Beshear said Kroger will be able to test more than 20,000 people over the next five weeks.

Kroger will provide the medical staff, PPE and web portal for signing up. The state is providing the test kits and is working with UPS and Gravity Diagnostics to have results in 48 hours.

The testing will be provided free for healthcare workers, first responders, individuals 65 years or older and those who have chronic health conditions.

Colleen Lindholz, president of Kroger Health, said tests will be performed Monday through Thursday, from 10 a.m. to 4 p.m. Up to 250 people will be tested each day. The tests will be patient-administered to conserve scarce personal protective equipment and cut down on contacts between people. Those who qualify can register online at thelittleclinic.com/drivethru-testing.

At Sunday’s briefing, Gov. Beshear said the partnership with Kroger would double the capacity the state currently has for testing. Beshear said increasing testing is the only way for the state to ease social distancing restrictions. So far, 25,866 Kentuckians—out of a population of nearly 4.5 million—have been tested.

On Sunday, the governor announced that 134 new cases had been confirmed in Kentucky, raising the state’s total to 1,963 cases.  He said 607 people have recovered.

State health officials are still not seeing the kind of surge in cases being seen in other states.

“We know we’re flattening the curve, but we can’t let up now,” Beshear said.

He also announced there had been three new deaths, raising the state’s total to 97.

On Friday, Gov. Beshear issued an executive order that people who are caught participating in mass gatherings this weekend—such as church services—must self-quarantine for 14 days.

Despite those orders, a small handful of churches persisted in holding services Sunday. At the briefing, Beshear noted that one congregation included two people from New Jersey, one of the nation’s biggest coronavirus hot spots outside New York. As of Saturday, April 11, there were 58,151 confirmed cases and 2,183 deaths in New Jersey, according to NJ.com.

The governor noted the two out-of-state congregants had brought all their New Jersey contacts to Kentucky, potentially endangering the health of not only everyone at the service, but everyone the worshipers come into contact with.

“This church could have done a drive-in service, it’s perfectly legal, but they chose not to,” Beshear said.

He asked the congregants to voluntarily self-quarantine as that is the only way they don’t take the risk of making someone else sick and possibly killing them.

At Maryville Baptist Church, worshipers told the Louisville Courier Journal they would refuse to obey the governor’s orders to self-quarantine. At the governor’s briefing, a reporter asked about using ankle monitors on those who didn’t comply.

“It’s not going to come to that,” Beshear said. He said he hopes the state will not have to take this step again.

The governor praised Kentucky’s worship leaders. Of the more than 5,000 houses of worship in the state, he said less than seven held services.

“I think you lived your faith today,” Beshear said.

The state has created a hotline (1-833-GIVE PPE) and website (giveppe.ky.gov) to streamline the donation process. In addition, PPE donations can be accepted at all 16 Kentucky State Police posts and at Transportation Cabinet offices in Louisville and Lexington.

The Kentucky Public Protection Cabinet has established the Team Kentucky Fund, an online platform to provide financial help to Kentuckians whose employment is affected by the coronavirus. The governor challenged those who are able to help to make a tax-deductible donation to the fund. In addition, a website portal has been created to streamline the process for businesses looking to donate supplies and services for Kentuckians in need.