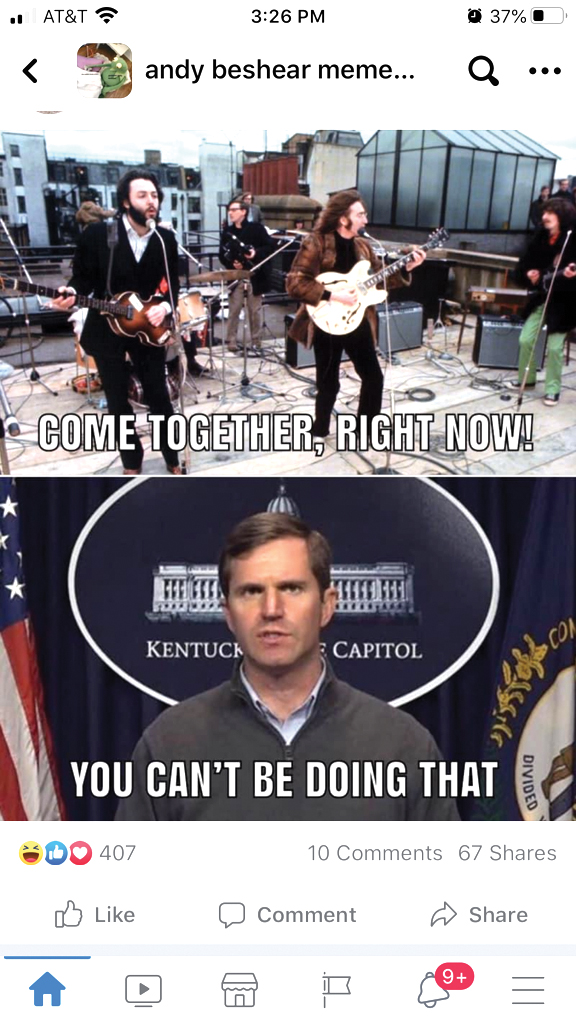 Gov. Andy Beshear enters living rooms across the state every day to bring Kentuckians the latest news—good and bad. Mercer Countians are among those who watch “Andy at 5” to hear updates and reassurances from the governor.

But amidst the worry and “social distancing,” the Facebookers have also found a way to spread humor even in light of the situation. Thus the “Andy Beshear memes for social distancing teens” Facebook page puts a lighthearted spin on things said and done during this crisis.

One of the longest running jokes on the page is about states offering to trade their governor for Beshear. The posts have not only teased the funny bones, but are getting adamant “no’s” from Kentuckians.

“All the memes seen on social media are fun, and give us a bit of levity in this dark time,” said Ann V. Morris of Harrodsburg. “But, to all of the offers from other states, I say, ‘No deal. We need to keep Andy in Kentucky.” 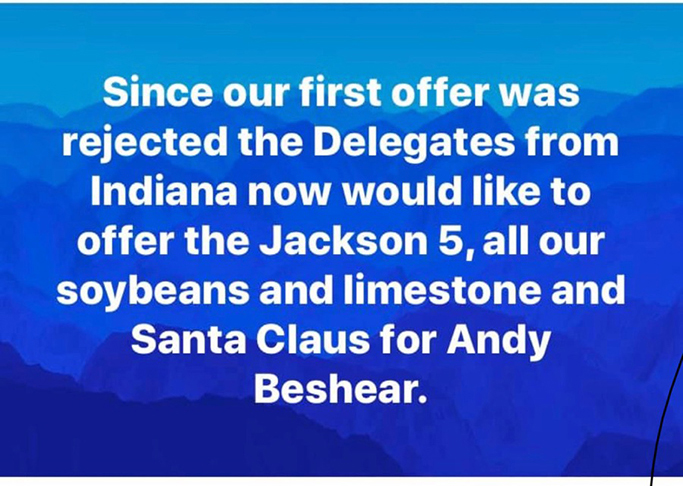 Comments under the memes show that not even a trade for the Duke 1992 win is a temptation for Kentuckians. But there are other propositions. A few of those include:

“We, the Indiana delegation, will trade a lifetime supply of wine and pumpkins from Huber’s along with Indy 500 tix for Andy Beshear.”

“I see you Indiana and I raise you Penn State, Taylor Swift, the whole *#! Hersey Theme Park and all the cheesesteaks you can eat.”

“Since our first offer was rejected, the delegates from Indiana now would like to offer the Jackson 5, all of our soybeans and limestone and Santa Claus for Andy Beshear.”

After further offers from Indiana that even included the vice president with no takers, the Indiana delegation requested a merger of the two states to be known as Andiana. 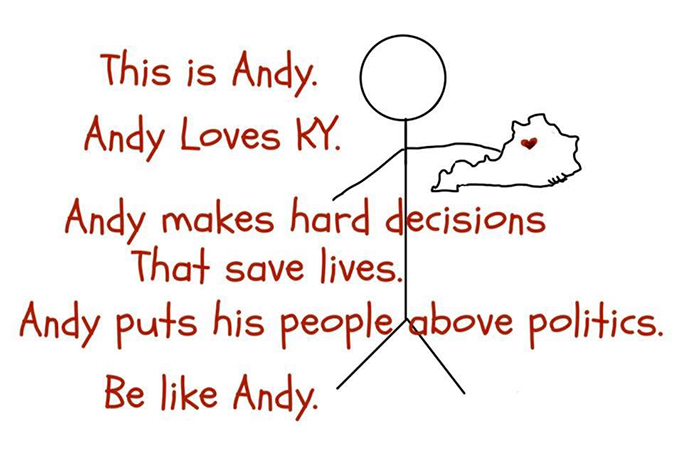 But the offers still continue:

“Florida will offer you your very own space shuttle from Cape Canaveral. The entire Miami heat franchise. Mickey Mouse himself. Your very own mansion in the Keys with an orchard of orange trees. The actual *!#$ sun. And just for kickers, I’ll throw in my first born. I’m sorry, sacrifices must be made. #Beshear for President #Help Us All.”

“Nevada has offered the Bunny Ranch, Wayne Newton and the actual Horseshoe from Jack Bunions for Andy Beshear!”

“Maryland will offer the second leg of the Triple Crown (Pimlico), the great Cal Ripken and a bushel of steamed crabs in Old Bay for Andy Beshear.”

“West Virginia is offering the rights to ‘Take Me Home Country Roads.’ They seemed serious.”

“Georgia Here. We’ll give you Coca Cola, Paula Dean, Tybee Island, Jason Aldean and your choice of UGA football or Atlanta Braves. We’re willing to trade anything at this point.”

“Missouri would officially like to offer the Gateway Arch, Super Bowl champion Kansas City Chiefs and one gooey butter cake as a trade for Andy Beshear.”

“California is now offering 300 plus days per year of sunshine, $15 an hour minimum wage and the singing raisins for Andy Beshear.”

Even the offers of Disney World, Dolly Parton and Graceland did not warrant an exchange. And the proposals continue from North Carolina, Alabama, Mississippi, New York, Tennessee, Texas, Arizona, Hawaii and others. Even other countries are vying for Kentucky’s governor.

“Look I’m from Australia and I’m not even 100 percent sure what Kentucky is, but I know that I love Andy Beshear.”