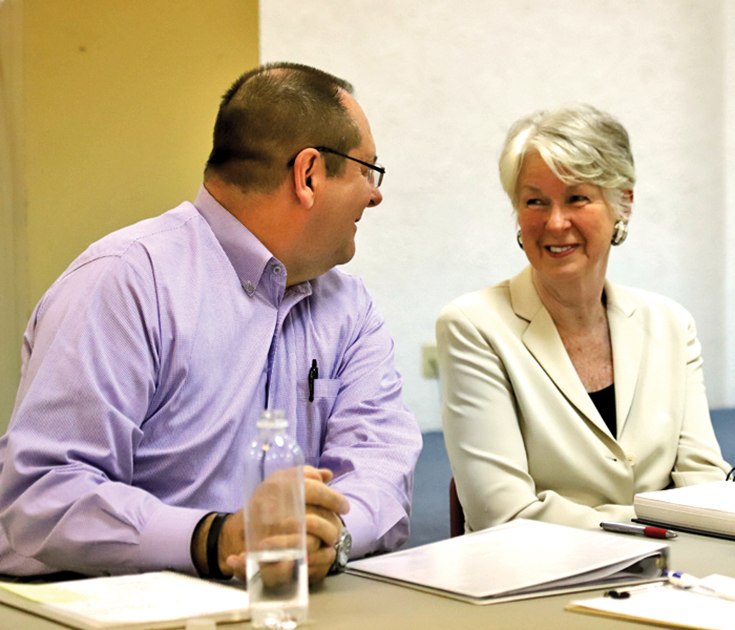 Lois Mateus talks with Tony Dunbar at a planning meeting for Harrodsburg’s 250th anniversary celebration. Mateus said she hopes to use her new position with the Kentucky Humanities Council to promote the celebration.

Lois Mateus has been elected to the Kentucky Humanities Council board of directors.

During her term on the 23-person volunteer board, Mateus said she will work to help promote Harrodsburg’s upcoming 250th anniversary celebration.

“My main initial objective is to help secure a James Harrod Chautauqua character by 2023,” Mateus said. “The importance of telling James Harrod’s history and message to the ‘Kentucky Starts Here’ theme of Harrodsburg’s 250th celebration is significant. The state humanities council develops and trains and schedules historical speakers like this to make appearances across the state.”

Mateus said several local people along with the 250th history committee are already at work developing the message and storyline for the James Harrod character.

“My role is to help shepherd their work through the  Kentucky Humanities Council, and additionally get all the marketing and public relations support we can from this highly respected statewide organization,” she said.

For example, Mateus said she hopes to use the Moments In Kentucky History podcast hosted by Bill Goodman, executive director of the Kentucky Humanities Council, to broadcast Harrodsburg’s history across the Commonwealth.

A Mercer County native and a graduate of the University of Kentucky, Mateus served as a senior vice president and member of the executive committee at Brown-Forman, where she worked for 26 years before retiring in 2008. She is credited with the restoration of many of the company’s historic properties, including the Woodford Reserve Distillery in Versailles, among other achievements.

Mateus is also the first woman to serve on the board of the Kentucky Distillers Association. In 2013, the association created the annual Lois Mateus Mentoring Award in her honor.

Mateus is past chair of the University of Kentucky’s Center for Rural Journalism and Community Issues.

In 2005, UK awarded her its Lifetime Achievement Award in Communications and Public Relations.

In addition, she is a contributing writer to the Harrodsburg Herald and also writes for Edible Louisville/Bluegrass, a regional food publication and contributes to Kentucky Monthly magazine.

Mateus is a founder and past president of the Kentucky Museum of Art and Craft and served as founder and co-chair of the Slow Food Bluegrass Chapter. She has served on the executive committees of Leadership Kentucky, the Kentucky Historical Society and the Kentucky Educational Television Foundation. She was a charter member of the Kentucky Oral History Commission.

The couple have also restored eight historic buildings in downtown Harrodsburg, including the Kentucky Fudge Company and the Next Door restaurant and the 1822 McBride House.

In 2016, they received Preservation Kentucky’s Linda Bruckheimer award for the conservation and preservation of rural landscape.

This fall, Preservation Kentucky is launching the Lois Mateus and Tim Peters “Making a Difference on Main Street” award.