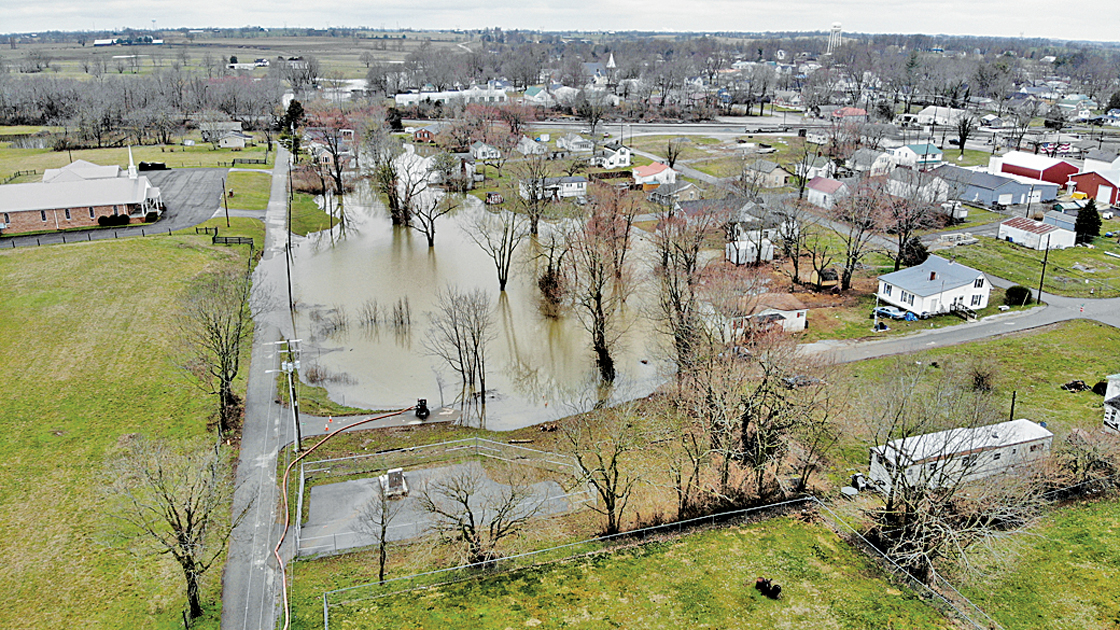 (Photo Submitted) Drone shot of Water Street underwater because of flooding in Burgin. Residents are looking for relief, but there are no quick and easy answers.

Over the past two years, the City of Burgin has flooded 18 times, city officials say. Three families have been forced to leave their homes while others are struggling to pay mounting repair bills from flood damage.

Many blame the Mercer County Sanitation District, specifically the blasting done by contractors hired by the district to build Burgin’s sewer.

But many residents also blame the city government, which they believe has been slow to act when flooding begins. Several residents attended last week’s meeting of the Burgin City Council to know why the pump was not turned on until flooding had already started.

“The pump started running as soon as we could get water to it,” Mayor Jim Caldwell said.

Caldwell said he has met with state and federal officials to develop a solution. He said the U.S. Corps of Engineers is doing a cost study.

“There is nothing we can do today that we aren’t already doing,” he said. “We’re doing everything we can.”

Caldwell and many others blame the sanitation district. They believe the sinkhole, which the city has long relied upon to drain the area near Water Street, is not draining.

“It used to flood every five to seven years,” he said. “Now it floods every two months.”

Over the last few years, Burgin resident Margie Brothers said she has paid hundreds of dollars to repair the home where she has lived for 65 years. When it floods, Brothers said there can be as much as six feet of water in her basement. She said she has had to replace her water heater as well as gas valves and install a brand new heating stove under her house to keep her pipes from freezing. Now she has to repair the pipes, which Brother  said have been damaged by the flood waters. Because of holes in the pipes leading to her furnaces, her gas was turned off.

“I can’t get my gas back on until the work is completed,” she said, leaving her without heat for a period where the average temperature was below freezing.

“I just sit down and cry,” said Brothers. “It’s going to cost thousands of dollars.”

Flood insurance is not required along Water Street because it is not part of the flood plain. While the federal government recommends all homeowners purchase flood insurance, the premiums can be high.

“I know we’ve had a lot of rain, but it’s never been like this,” Bartleson said. Adding insult to injury is the high minimum residents have to pay for sewer service.

“They are charging us all this stuff but they don’t do nothing for us,” Bartleson said.

She and Brothers said at least three families have been forced out by flooding and mold.

“I ain’t going nowhere, so they better fix this crap,” Bartleson said. 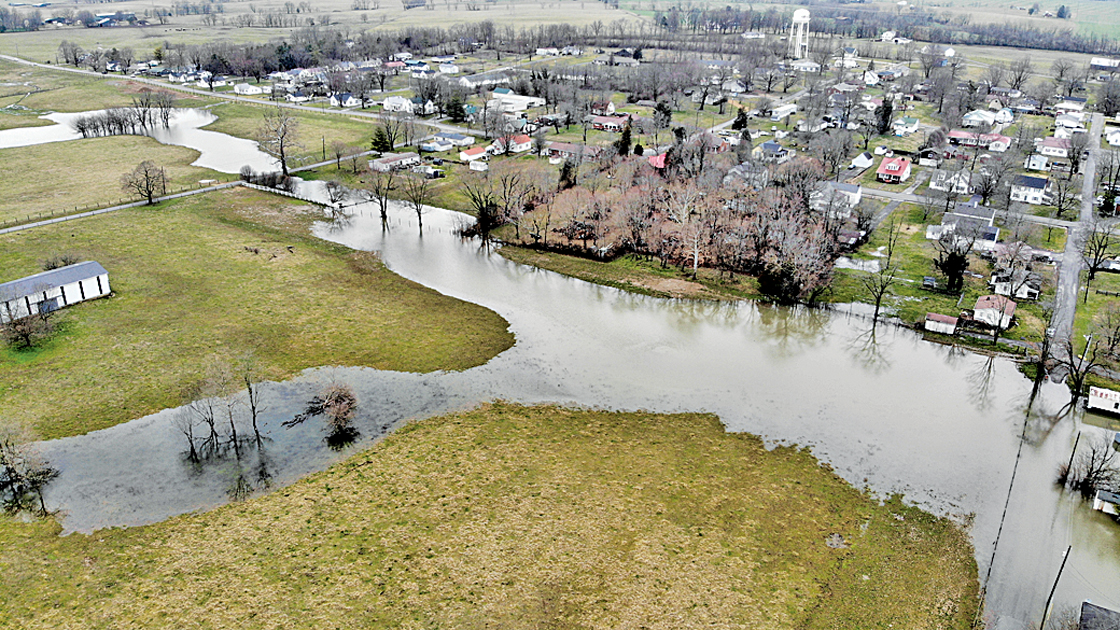 (Photo Submitted) Part of Burgin around Buster Pike is under water after the recent torrential downpours. Residents say blasting done during the construction of the city’s sewer is to blame for the flooding.

There will be no cheap and easy fix to Burgin’s flooding problems.  Caldwell said the city has already paid $250,000 to deal with the situation. If the city sues the district, it could take years before they see any money, and there is always a chance they could lose the suit.

The mayor said the city couldn’t meet the 90 day deadline for funding from the Federal Emergency Management Agency (FEMA).

“Even if we meet the deadline, they won’t make a decision until September for the next budget year,” Caldwell said.

Another hitch is that FEMA only reimburses for work done by the city. Burgin has to pay contractors out of pocket and won’t receive payment for months.

And that’s if FEMA agrees to provide any funding at all, which is not guaranteed.

“Twenty houses is a significant part of Burgin, but when you’re looking at federal funding, it’s not that significant,” Caldwell said Thursday. “We’re liable not to get a grant at all.”

The US Army Corps of Engineers is currently pricing out four options, the mayor said, including installing a pump station or creating a drainage basin on Water Street.

Another solution may be to buy the damaged properties and tear them down. But that will lead to disputes over how much the properties are worth and how much they should be worth, the mayor said.

“Even if we bought every property down there we’d still have a problem,” Caldwell said. “We would spend $200,000, we wouldn’t be helping them to a certain degree and the City of Burgin would have a lot of useless properties on its hands.”

In other business, the Burgin City Council learned no one had bid for the auditor contract. Mayor Caldwell said no accountants were looking for work because it’s tax time.

The city doesn’t have to submit bids because auditing is a professional service. Councilman David Caldwell moved to let Noel Turner, who has been working to get the city up to date on its state audits, negotiate for audit services. The motion passed unanimously.

Turner told the council the city needs to file an extension for the fiscal year 2015 audit.

The council also voted to move city employees onto W2s instead of 1099 forms.

The next meeting of the Burgin City Council will be at 6:30 p.m. on Tuesday, March 9.