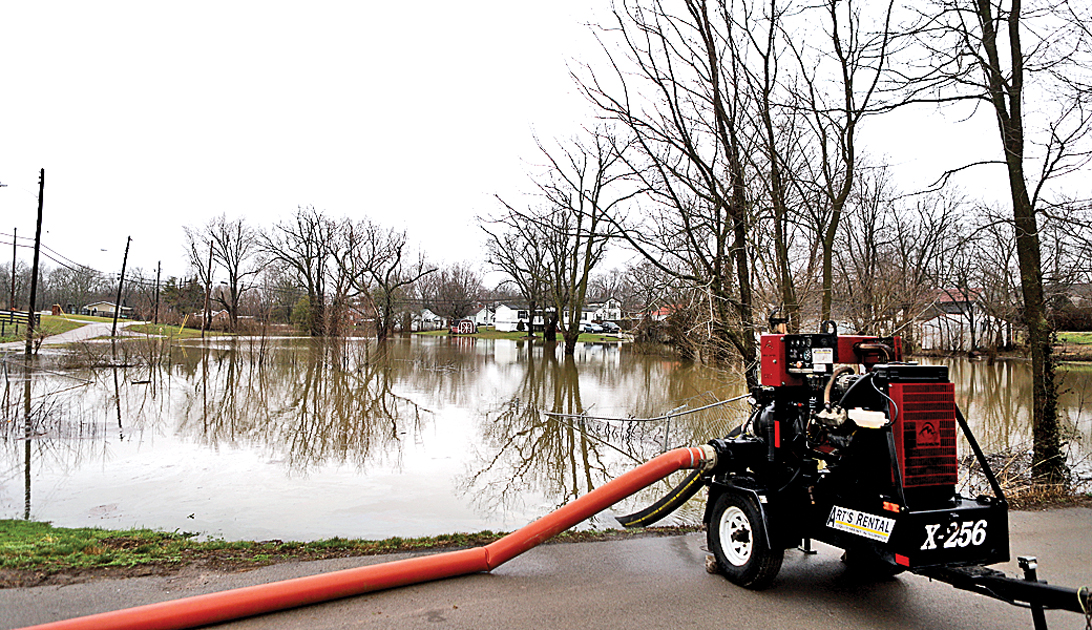 The City of Burgin continues pumping floodwater from the area near Water Street. Forecasters are calling for even more rain over the next week. (Image: The Harrodsburg Herald/Robert Moore).

State and local officials are continuing to monitor flooding from last week’s severe weather. At the same time, they have to prepare for heavy rains forecast for this week across the Commonwealth.

Since the beginning of the month, 5.1 inches of rain have been recorded at the Kennedy Bridge pumping station, according to the Mercer County Sanitation District, with two inches recorded since Feb. 8.

And that’s on top of a heavy year for rain across the state. On average, Kentucky receives 32 inches a year. In 2019, the commonwealth received 42 inches of rain, with some parts of Kentucky receiving 52 inches.

There is still more to come. Rain has been forecast for four of the next 10 days, according to the National Weather Service. This is bad news for Burgin residents who live along Water Street, some of whom have been displaced since the last flooding event in November 2019.

The City of Burgin has sought help to deal with flooding. The US Army Corps of Engineers dedicated $80,000 worth of services, site surveys and pre-engineering to study flooding. In addition, Burgin Mayor Jim Caldwell told the Harrodsburg Herald in December that the city had spent $60,000 dealing with flooding since he came into office.

Last week, Gov. Andy Beshear declared a state of emergency for the Commonwealth in response to heavy flooding in southeastern Kentucky. To date, nine counties and four cities have declared states of emergencies, with parts of the University of the Cumberlands and the city of Williamsburg under water.

Here are some basic safety tips for flooding awareness courtesy of the Kentucky Emergency Management:

• Do not drive over bridges that are over fast-moving floodwaters. Floodwaters can scour foundation material from around the footings and make the bridge unstable.

• If there is a chance of flash flooding, move immediately to higher ground.

• If floodwaters rise around your car but the water is not moving, abandon the car and move to higher ground. Do not leave the car and enter moving water.

• Avoid camping or parking along streams, rivers, and creeks during heavy rainfall. These areas can flood quickly and with little warning.