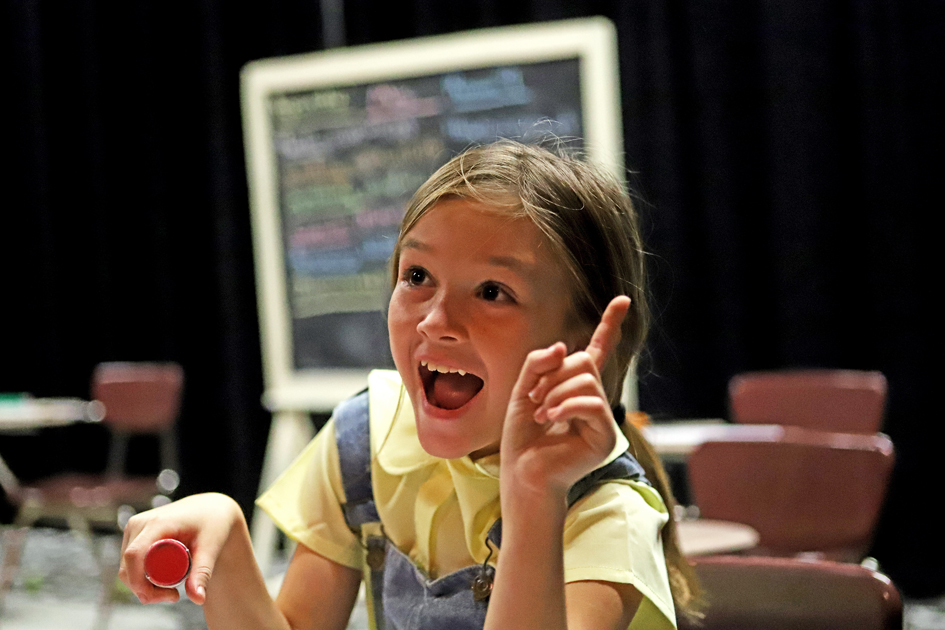 (The Harrodsburg Herald/Robert Moore)
Kindergartner Junie B. Jones (Payton Isaacs) thinks she’s found the solution to all her problems. “Junie B. Jones Is Not A Crook” begins its two week run at Ragged Edge Community Theatre on Friday, Feb. 14.

Something terrible happened to Junie B. Jones at school. Someone stole her new furry mittens. So when Junie B. finds a wonderful pen of many colors, she should be allowed to keep it, right? Because finders keepers, losers weepers.

That’s the moral conunmdrum faced by the title character in “Junie B. Jones is Not a Crook” which begins a two week engagement at the Ragged Edge Community Theatre on Friday, Feb. 14.

The play, which is based on the best-selling book series by Barbara Park, takes an unfiltered look at the social and ethical minefield known as kindergarten through the eyes of one very outspoken, free-thinking almost-six-year-old named Junie B. Jones, who is played by Payton Isaacs.

In the play, Junie B. hopes her wonderful new pen will help her catch the eye of the handsomest boy in kindergarten.

The cast is made up of young people aged 8-15. The  grownups in the room include director Emma Parks Steberl, stage manager and costumer Sonya Selby Steberl and set and lighting design by Allan Barlow.