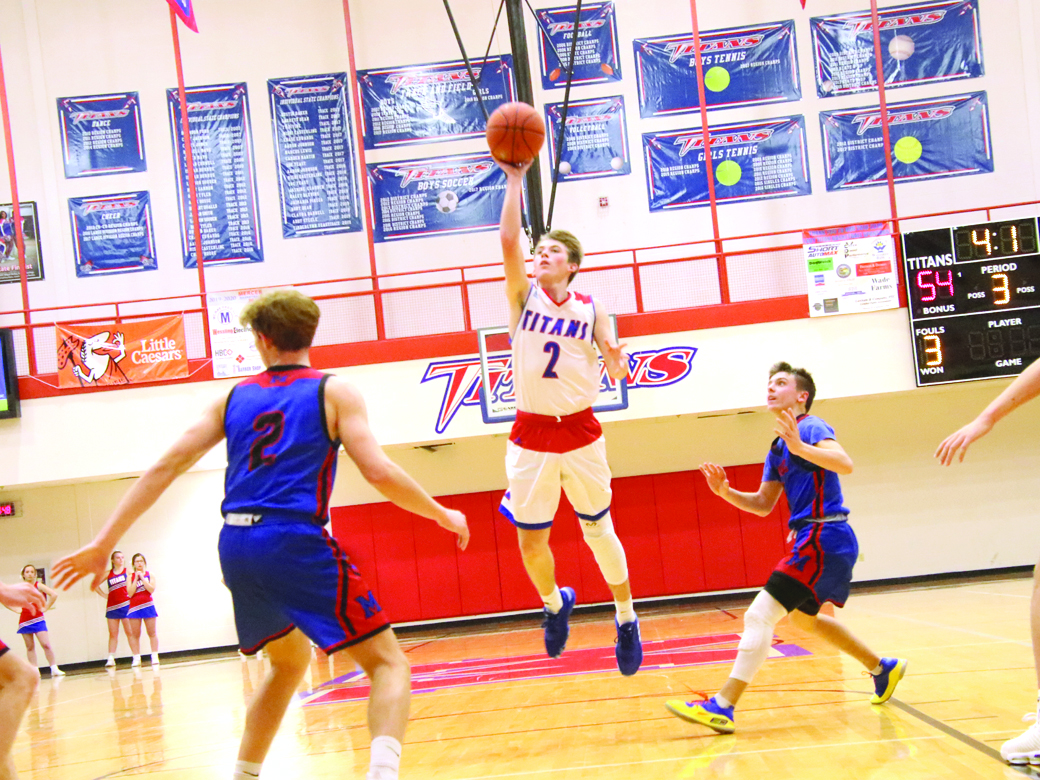 Mercer County junior Sam Baughman (2) shoots an open floater in the second half of the Titans’ dominating win over the Model Patriots on Monday, Dec. 16. Baughman scored nine points and hit two triples in the win and is shooting 39-percent from beyond the arc through five games. (photo by Arpan Dixit)

After suffering a double digit loss to Danville last Friday, Dec. 13, the Mercer County Titans (3-2) have rebounded to win their last two games against Butler and Model.

In their most recent win against Model on Monday, Dec. 16, the Titans cruised to a 66-36 victory over the Patriots in the second game of a boy/girl doubleheader at Mercer County Senior High School.

Lewis was again the top scorer for the Titans against Model, scoring 16 points to go along with four assists and three rebounds. Lewis missed the first two games of the season with an injury and Head Coach Josh Hamlin is happy to have one of his senior leaders back on the floor.

“Jamisen (Lewis) brings us a different element. It allows us to take the ball out of Kaelin’s (Drakeford) hands. It also allows us to penetrate and find people on the perimeter,” said Hamlin. “He’s one of the craftiest finishers in the region. He’s been a key cog the last two seasons and he comes into this year and is out for two weeks. It was a big loss early in the season but now that he’s back, we’re looking to him to get us to where we want to be.”

Kaelin Drakeford continues his monster start to the season. He notched another double-double, 15 points and 11 rebounds, for his fourth in five games this season. The senior was averaging 25 points per game coming in against the Patriots.

Against Butler, one of the favorites in the 6th Region, Drakeford was held scoreless until a few minutes left in the third quarter. He finished with seven points, short of his average of 25, but dominated the glass with 15 boards.

“He made great decisions and was totally unselfish and it speaks volumes to him as a leader,” said Hamlin. “Kaelin is probably the best leader I’ve been around in my six years coaching in this community.”

“Against Model, he missed a couple dunk opportunities that might’ve given him close to 20, but it wasn’t something that bothered him,” said Hamlin. “He was cheering for his teammates when they made plays throughout the game.”

The Titans have gotten a lot of production out of their two main big men, seniors Bryson Yeast and Trey Price.

“We thought that we had a good frontcourt coming in. We don’t pass the look test with Trey (Price) and Bryson (Yeast) because of their size, but they are both built really well and are extremely athletic,” said Hamlin. “Trey is a really talented kid and a good slasher. I’ve been surprised about how well he’s been a leader on the court. He’s taken more ownership. With Bryson, if you were to have the most under appreciated player award, it would go to him. I’m glad he is on our team. Along with Kaelin, Trey and Bryson have done great for us on the glass and so have our guards. Jamisen, along with Sam (Baughman) have done a great job on the glass for us early on.”

Baughman, scored nine points, hit both of his triples and is shooting near 40-percent from beyond the arc this season.

The Titans have won the rebounding battle against every team they have faced this season heading into the Model game, and that continued Monday night as they out rebounded the Patriots 32-27.

The first quarter was close, but the Titans dominated from then on out. They held a 21-point lead at halftime and their biggest lead blossomed to 33 points early in the fourth quarter.

Hamlin also gave credit to the Mercer County student section, the Mercer Maniacs, for their support.

“They’ve been great. I had a lot of those kids in class when I first got here. They’ve been tremendous. I’ve been really impressed with our crowds. I’m hoping the fans will come out on Friday for a class district matchup,” Hamlin said.

The Titans take on the West Jessamine Colts at 7:30 p.m.

“I think it’s going to be really exciting. Right before Christmas, the Mercer-West game is the most exciting game in the region on that day in my opinion,” said Hamlin. 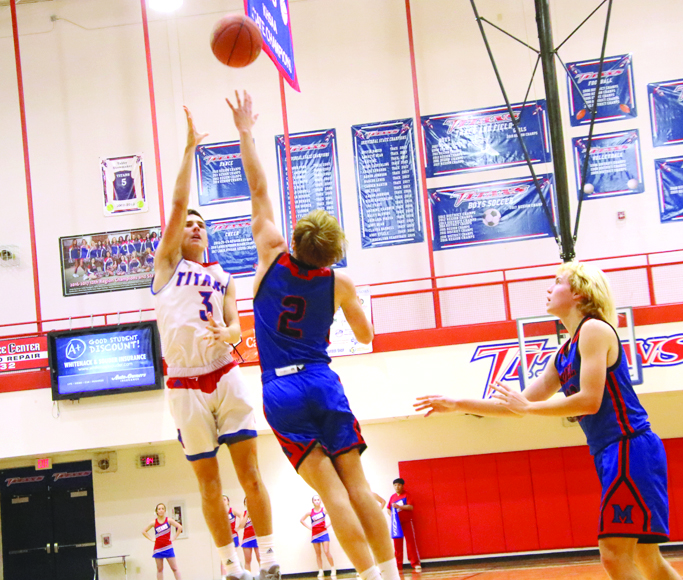