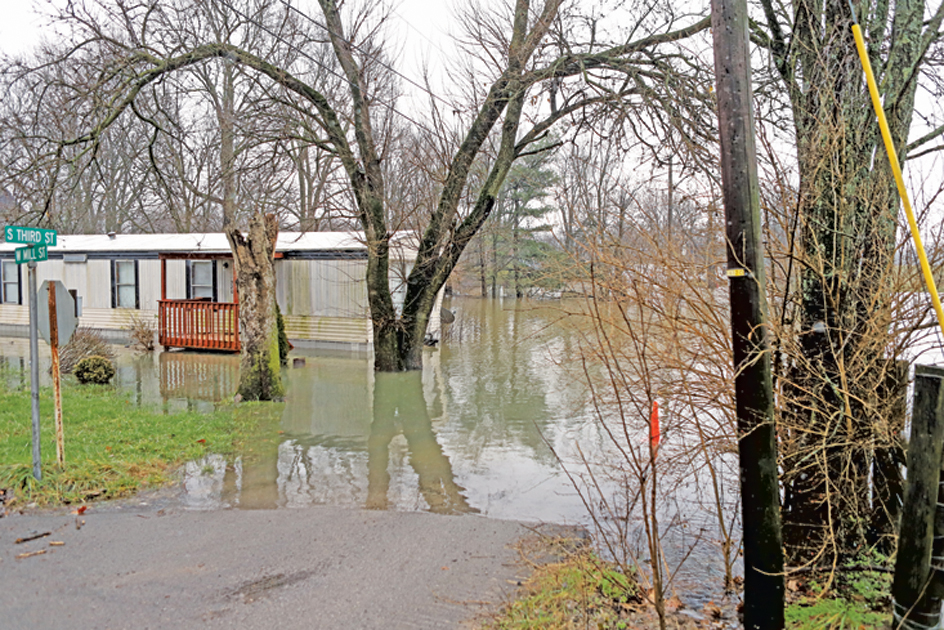 Heavy rains have led to flooding along the area around Water Street in Burgin.

The City of Burgin is seeking help to deal with flooding. While the US Army Corps of Engineers have dedicated $80,000 worth of services, site surveys and pre-engineering to study flooding in Burgin, that won’t solve the problem, Burgin Mayor Jim Caldwell said at last week’s city council meeting.

“They can’t do the actual engineering because the project does not meet their criteria, but the work they do will be money we don’t have to pay later,” said Caldwell.

The council met with the Corps of Engineers in October. Last week, Caldwell asked the council to open up bidding for engineering firms.

“We need to get started on a solution,” said Caldwell. “We may not have the funds to do the repair yet, but we can at least hire an engineering firm to let us know what we need to do.”

Following the most recent flooding, citizens attended the meeting to hear the council’s plans.

Margie Brothers said her basement fills with water every time the city floods and she is hoping for a long term solution.

“I know we have had flooding my whole life but this is different. The water doesn’t drain itself,” said Brothers. “It happens every time we get rain now instead of once every few years.”

Mayor Caldwell apologized to the council and citizens for not having the pumps set before the most recent rain.

“We just got more rain quicker than anticipated,” said Caldwell. “The federal road aid money is set to be released to the city soon and can possibly help assist with engineering to help with the flooding. Eight roads are covered each time it floods.”

Mayor Caldwell also suggested adding a 36-inch pipe from the flood area to the creek to keep the water moving, but said engineering assessments were needed first.

“We are waiting for the engineering to get started before any decisions are discussed,” said Caldwell. “The last administration spent $150,000 dealing with flooding issues. Our administration has spent $60,000.”

Councilman Sindicat “Sid” Dunn asked if the city would be able to recover any of the money spent to combat the flood waters.

“It would cost in attorney fees, engineering and court fees to try to recoup our losses,” said Caldwell. “At this point it doesn’t matter the cause. we just have to find a solution.”

• Learned the city has achieved compliance with the state for their audits. “After receiving compliance, our auditor sent us an invoice for $14,000,” said Caldwell. “We received an invoice from the auditor essentially stating we had asked to have the audits stopped due to our arrangement with the state. I clarified with her that we did not cancel the 2016 audit.”

Caldwell said he felt the audit should be nearly complete.

“I would prefer a completed audit even if it was a disclaimed audit,” said Caldwell.  “She then requested financial statements that she was unable to recreate based on the information she had that appeared to be incomplete. I discussed it with our accountant and he stated he was uncomfortable creating the reports with the information we had. We did not have the reports from previous years because frankly the administration did not do them.”

The mayor said he had little faith in the numbers they had.

“Creating these reports would require us to sign off on information we know to be inaccurate and incomplete,” said Caldwell.” I choose not to do so and will therefore not ask anyone under me to do so.”

• Learned Mayor Caldwell  had spoken with the Mercer County Sanitation District about the sewer. Caldwell said the contractor had been unable to meet the deadline  to finish  paving. The plan is to  try again once the blacktop plant opens in the spring, he said.

“The construction company is working to finish up, but they are not complete yet,” said Caldwell. “They are working on South First Street and will be for a while before they get finished.”

• Learned that work  continues on changing out water meters.

“There have been a few issues with the new system, but they are being addressed and corrected as they have been found,” said Caldwell.  “The water report still held an eight-percent water loss. Wally Bottoms is still working to get a better water report and will present it as soon as its available.”

• Awarded holiday bonuses of $40 to city  employees and $25 to Mercer County dispatchers.