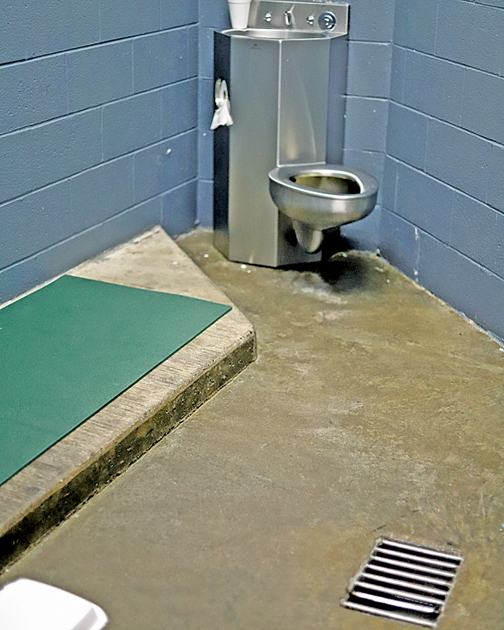 This cell is used to isolate female inmates at Boyle County Detention Center. According to jail officials, the recidivism rate for women prisoners is 88-percent.

Of the 237 prisoners inside BCDC last Friday, 46 of them were female. According to Boyle County Jailer Brian Wofford, the recidivism rate for female inmates—the number of prisoners who are arrested again after being released—is 88-percent. The recidivism rate is 60-percent for males.

At the same time, the number of female inmates, both at BCDC and across the nation, is on the rise.

“That’s why I’m looking at doing a female-oriented SAP program,” Wofford said at the most recent meeting of the Mercer-Boyle County Joint Jail Commission, which operates BCDC.

SAP, which means substance abuse  program, is administered by the Kentucky Department of Corrections.  According to a 2018 study, over half of the SAP graduates–56.7-percent—had not been re-incarcerated in the year since their release. Most of them—86-percent—were living in stable housing while nearly two thirds of them—62.5-percent—were employed and over three quarters—77.9-percent—reported providing financial support to their children.

However, outside of Kenton County, no jail in the commonwealth makes SAP available to female inmates.

Wofford said he’s met with state officials about expanding SAP services to women. Pending state approval, Wofford would like to amend BCDC’s agreement with Shepherd’s House, who handles BCDC’S day treatment program, so they would also manage the female SAP.

“I think we have a better chance of getting accepted with Shepherd’s House,” Wofford said last week. “They’re already licensed.”

Just as important to officials from Mercer and Boyle Counties, who have sought to reduce BCDC’s inmate population without breaking the budget, the state would pay the costs of the program, Wofford said.

The program would consist of three months of treatment inside BCDC followed by six months in the day treatment program. It would only be for female county inmates.

Between 1980 and 2017, the number of imprisoned women across the nation increased by more than 750-percent, according to the Bureau of Justice Statistics. The number of women incarcerated at the local, state and federal level grew from 26,378 in 1980 to 225,060 in 2017. Counting those on probation, there are 1.3 million women under the supervision of the criminal justice system.

A quarter of the female inmates are serving time for a drug related offense, according to the federal government. Reducing the recidivism rate for female inmates would impact more than the inmates. More than 60-percent of women in state prisons have a child under the age of 18.

Jail officials are also seeking to create a pretrial substance abuse program for both male and female offenders. Under PSAP, county inmates would be sentenced to SAP, but the state would pay for it. If the beds are filled, prisoners would be sent elsewhere in the state’s correctional system for treatment. While the state will cover the $9 a day for treatment, the counties would pay for inmates as usual.

Mercer County Attorney Ted Dean said there are a number of inmates he wants to get treatment, he said, “That’s a long time on our nickel.”

The counties would still have to pay the per diem—the amount it takes to feed and take care of an inmate per day—and medical expenses.

“If we can get them in our bed, it would be better,” Dean said. An official from the Kentucky Department of Corrections will talk about  PSAP at the next criminal justice coordinating council meeting in January, Wofford said.

In other business, the Mercer-Boyle County Joint Jail Commission:

• Discussed BCDC’s contract with Southern Health Partners, who provide medical services to inmates. Wofford said another healthcare provider hires registered nurses, instead of licensed practical nurses. The jailer said RNs can offer more services onsite. While the other provider would cost more up front, BCDC would save on transportation expenses and overtime. He asked the commission to consider that when it came time to renew the agreement with Southern Health Partners.

“It’s something I would like us to look at and consider,” Wofford said. He said he had spoken with Mid America Dentistry about providing dental services onsite. After talking with the provider, he said it would not be cost effective right now.

Jail officials say there are currently 15 inmates taking antibiotics because of abscessed teeth. The increase in inmates needing dental services is attributed to the increase in methamphetamine use.

It was also noted that negotiations with the state about acquiring property at Northpoint to build a new jail have been on hold because of the change in leadership at the state level.

The next meeting of the Mercer-Boyle County Joint Jail Commission will be on Friday, Jan. 10, 2020, at 1:30 p.m. at the Boyle County Courthouse in Danville. The criminal justice coordinating council meets at noon.