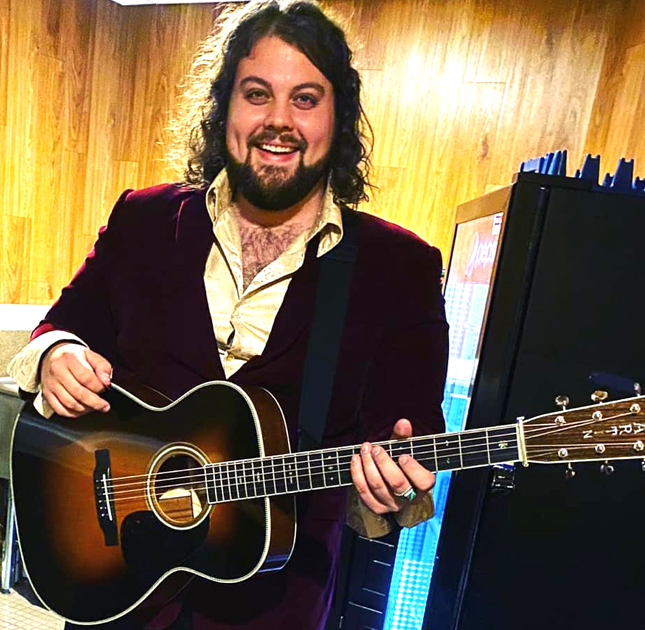 Dillon Carmichael played a Martin guitar that belongs to Vince Gill at his most recent appearance on the Grand Ole Opry.

While Burgin native Dillon Carmichael has been busy chasing his dreams in Nashville, Tennessee, the country music capital of the world, he still makes time to come home for the holidays.

This past weekend he played the Grand Ole Opry stage for the 12th time, sharing the stage with his mother once again and playing Vince Gill’s guitar.  Following the concert he made it home to enjoy the Thanksgiving holiday with his family in Mercer County.

“It was good to be home and enjoy the food,” said Carmichael. “I visited my family. I am very blessed. I love my hometown and everyone in it.”

Music started early in Carmichael’s life. His father and uncles performed in a southern gospel quartet, his mother sang all over the eastern part of the state, and her brothers, John Michael and Eddie Montgomery both enjoyed massive chart success.  Now 25, Carmichael is on his second album and has been seeing chart success of his own.

“I didn’t at any point consciously decide I was going to be a musician,” says Carmichael. “It just happened naturally. I found a kind of truth in country music that I couldn’t get anywhere else.”

Carmichael’s second album “I Do For You,” hit stores back in October and his latest music video from that album dropped on Monday, Nov, 18. Two weeks later he is up to almost a half million views and an expanded fan base.

“This new album has a lot more tempo to the songs than my previous album,” said Carmichael. “Adding tempo makes the songs good for radio and the live shows.”

Carmichael said his advice for anyone seeking a musical career is to work hard and believe dreams do come true.

All of Carmichael’s music can be downloaded through streaming services.