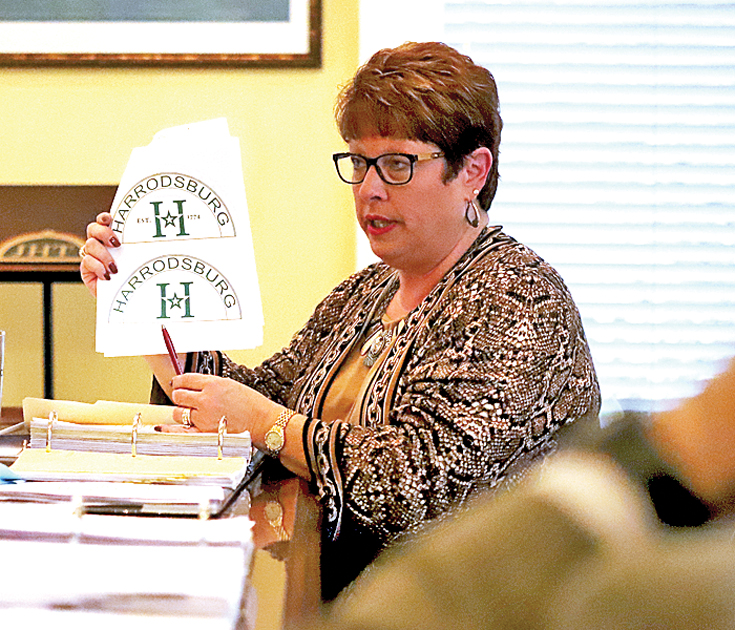 Harrodsburg Mayor Art Freeman answered some of the questions the Harrodsburg-Mercer County Tourist Commission had about the city’s new logo. Questions about the ownership of the logo has stalled an initiative to place way-finding signs around the community.

“We own the logo,” Freeman told the tourist commission at their board meeting last Wednesday. “I want you to tell me what you need to get the way-finding signs moving.”

Karen P. Hackett, executive director of the tourist commission, said the board was asking for permission from the logo’s owner to use it.

Freeman said he would get it to them. He said everything would be completed within the next couple of weeks.

At last month’s meeting, an attempt by the 250th anniversary committee to answer questions about their plans—as well as ask for money—left the tourist commission with more questions than they started with.

The board voted in July to suspend their effort to install way-finding signs—which has cost $76,000 and taken six years to develop so far—in order to include the new logo. But it was unclear if the 250th anniversary committee owned the rights.

Last week, Mayor Freeman assured the tourist commission they could move forward with the project.

“The logo is already paid for,” Freeman said.

The tourist commission reviewed the design of the way-finding signs, which will be massive. The signs are six feet wide with three panels. Each panel is 24 inches tall. The header is 30 inches tall. The lettering will be green on a solid white background. Hackett said the Kentucky Transportation Cabinet had given them permission to use Harrodsburg’s foundation date on the sign.

The state approved the revised sign drawings on Oct. 5, according to Hackett. She said the contractors have completed 75-percent of the work on the signs. The balance will be due on completion of the job. Weather permitting, the contractor would begin installation of the bases for the signs. All locations have been approved except one, she said. The sign would be next to CVS.

“That one is pending,” said Hackett, who said she was dealing with the pharmacy chain’s corporate  office.

The board approved moving forward with the new designs once they received permission from the city. Hackett said there would be an unveiling ceremony when the first sign was installed.

Before he left, the mayor was also asked about economic development. The Sonic fast food restaurant closed, which will impact tax revenues for both the city and the tourist commission.

Freeman spoke about the possibilities for growth through Campbellsville University—Harrodsburg and Corning, which received a $250 million investment from Apple in September as well as the possible development of the former Harrodsburg High School campus.

While Loafers on Broadway has renamed itself the Olde Towne Grill and Gameroom and Rock Haven Cigar, Tap and Pourhouse is scheduled to open on Nov. 30, Freeman said there is a need for more restaurants.

However, the mayor downplayed a common complaint about Harrodsburg, that there is nowhere to eat here.

“We have 40-something restaurants in town,” Freeman said. “The problem is, most of them are only open for breakfast and lunch.”

The tourist commission also learned the Harrodsburg-Mercer County Industrial Development Authority is conducting a feasibility study for a new hotel. There have been rumors about a new hotel, possibly Hilton brand property, opening locally for nearly a year now. While some board members were hopeful the study would result in a new hotel being built in the area, it was noted  a similar feasibility study had been conducted more than 12 years ago and didn’t lead to anything.

Mike Inman, who serves as vice-chair of the tourist commission board of directors, noted a study being conducted “doesn’t mean anybody is interested in doing it.”

• Learned that the project to replace the stockade walls at Old Fort Harrod State Park  has been pushed back to August 2020. In October 2018, the tourist commission committed $100,000 towards repairs at the fort in order to get ready for the anniversary. That work was scheduled to begin in November, but the state has moved that date forward to next year.

• Approved a $500 sponsorship request for the veterans parade on Nov. 2. The organizers were unable to file the necessary paperwork before the parade. Any funds left over after expenses will be used for next year’s event, Hackett said.

She called the attendance at the opening ceremony “embarrassing.” She said organizers were looking at relocating events like the Walk/Run and Ruck March to Anderson-Dean Community Park. There will be no parade next year, because the local National Guard unit will be on drills. They will participate in Harrodsburg’s Christmas Parade.

“Our bylaws don’t seem to have a lot of detail,” Inman said. “Clearly well-written bylaws are essential.”

Inman was elected chair of the bylaws committee, with board member Tia Taylor and Chair Karen Tuggle as committee members.

The next meeting of the Harrodsburg-Mercer County Tourist Commission will be Wednesday, Dec. 18, at 8 a.m.