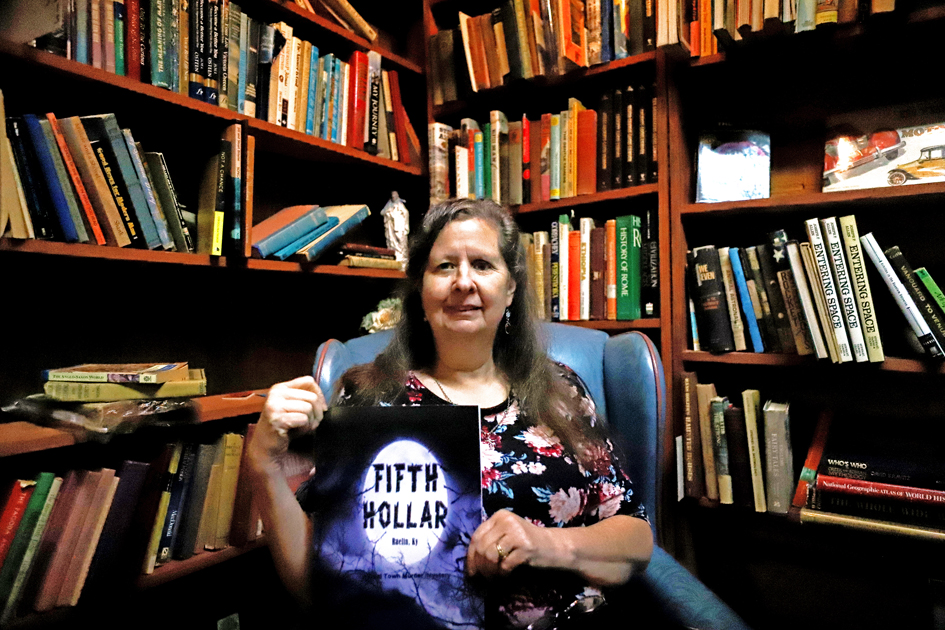 Jan Lewis created the TV series ‘Fifth Hollar’ by combining news stories with old legends. The first season is currently available on Youtube while production has already started on the third season.

Have you ever watched TV and said to yourself, I could do that? Jan Lewis and her husband, Curt Lewis, did.

Except, unlike the rest of us, they actually went out and did it.

The idea came while Lewis, who leads ghost walks around Harrodsburg and conducts paranormal investigations, was sitting on the couch with Curt.

“My husband said we could do that,” she recalled.

And so they did. It wasn’t as simple as calling Netflix and getting a one season commitment, but it fell together pretty neatly.

Lewis was attending a Scarefest, a horror and paranormal convention, and was asked to be an extra on a TV show. She was subsequently asked to help write scripts.

“From there, I started doing my own show,” Lewis said.

She formed Southpaw Productions in 2015 with Chad Horn, another Harrodsburg resident.

In 2016, they started filming “Fifth Hollar” in Paint Lick and in locations around Johnson County. Some interior scenes have been shot here in Harrodsburg as well, Lewis said.

The premise of “Fifth Hollar” involves two FBI agents investigating the disappearance of teenage girls from a fictional coal town of Raelin, Kentucky.

Asked where she got the idea for “Fifth Hollar,” Lewis said, “I just pulled a lot of things out of the news.”

The series deals with trafficking of people and drugs, and Lewis notes that Eastern Kentucky is ground zero for the opioid epidemic.

Lewis got the title from the ghost stories told by historical reenactors from Eastern Kentucky, about a mysterious “fifth hollar” where phantom coal miners still toiled under the hills long after their death. “They said they could hear the ghost miners working,” she said.

She said the Kentucky Coal Mining Museum in Benham is one of the sponsors of the show. Working with the museum has given Lewis an insight into the community, of the families broken up by economic security, as former miners leave for weeks or months at a time to find work elsewhere.

“We’re looking at things that can benefit the community,” Lewis said.

One thing they’re doing is partnering with local schools to ensure students who work on the production receive academic credit.

Lewis isn’t just the show runner. She plays Annie, a medium, while Chad Horn plays Pastor Jacob Stone, a preacher who may be more than he seems. Tim White, Mercer County’s Man Of A Thousand Faces, plays the Vice-Mayor of Raelin, the leader of a mysterious cult-like organization.

Foothills is getting ready to air the second season of “Fifth Hollar” early next year, while the first season is being released right now on Youtube. Each season consists of five half-hour episodes.

Lewis and Southpaw Productions are working on a third season. She said they’ve already shot the first episode.

There are a lot of details to work out. “Fifth Hollar” has 44 cast members—including 14 regular cast members. All the cast and crew are volunteers.

“We film mostly on weekends,” she said.

At the same time, Lewis is working on a three book series that will explain all the details of “Fifth Hollar” that the show can’t cover. Lewis said she hopes the first book will come out next spring. As if that wasn’t enough, she and her husband have also appeared in a Johnny Knoxville movie, “Above Suspicion.”

Lewis is thrilled with the reception to “Fifth Hollar.”

But she admits she’d like it to be more than what it is now, an “expensive hobby.”

“It was something we could do together instead of sitting at home,” Lewis said. “Hopefully we’ll make some money off it.”

Still she’s happy with the way things are working out. Everybody may think they could make a TV show if they were ever given a chance, but Jan Lewis and her friends have actually done it.

“We’ve been lucky and blessed,” she said.