Harrodsburg Tankers To Be Honored On Saturday, Nov. 2

Members of the 2123rd Transportation Company of the Kentucky National Guard march in last year’s parade.

Mobility assistance is available for veterans who would like to participate in the Harrodsburg Tankers Memorial March and Veterans Parade on Saturday, Nov. 2.

Jackie Mattingly, chairman of the Harrodsburg Tankers Military Committee, said a half a dozen have signed up for assistance so far. The parade is for all veterans. Those needing assistance can call Mattingly at 734-0217 or email him at ​jackofalltrades0819@yahoo.com. Mattingly said no one would be turned away on Saturday. 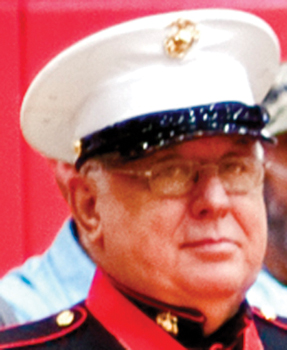 “All they have to do is show up,” said Mattingly, a former sergeant in the United States Marine Corps who served during the Vietnam War. He helped found the Vietnam Veterans of America (VVA) Chapter 1104 in 2014 and became president of the state organization in 2016.

The opening ceremony will be at 9 a.m. at Old Ford Harrod State Park (100 South College Street). April Hunt will sing the National Anthem and speakers will share the importance of recognizing our veterans.

The parade will begin at Old Fort Harrod and travel down Lexington Street, up Main and back down Chiles Street before concluding at the park. The events will happen rain or shine, Mattingly said.

“All area veterans, families of veterans and active duty service personnel are encouraged to join in the parade,” he said. “The purpose of this event is to honor the members of the Bataan March, as well as to recognize and honor all veterans from all branches of the military and conflicts.”

“Decorate your vehicle, bring posters or signs to recognize your service personnel, we want to celebrate and honor those who have served or are actively serving our country,” said Harrodsburg First Executive Director Julie Wagner. “The public is encouraged to attend the parade and show appreciation for our veterans and service personnel.”

Parade applications can be found at https://downtownharrodsburg.com/organizational-documents.