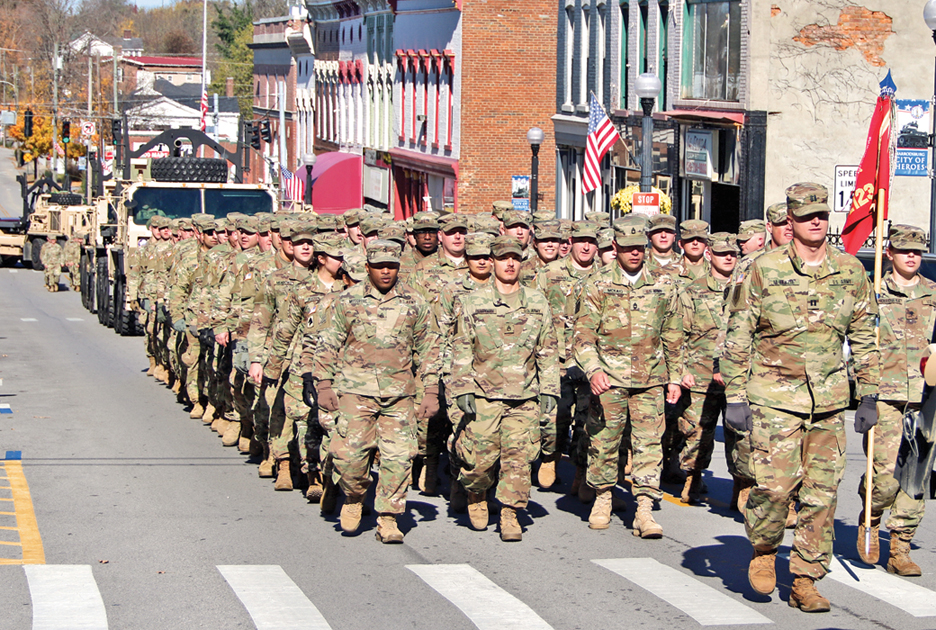 Local veterans are being asked to particpate in this year’s parade, which honors not only the Harrodsburg Tankers, but all of the soldiers who fought for the nation.

Everybody is invited to come out on Saturday, Nov. 2, and help honor the Harrodsburg Tankers as well as all Mercer County veterans.

The Harrodsburg Tankers Memorial March and Veterans Parade will start at 12:30 p.m., but that is just one in a series of events that will honor Mercer County’s soldiers, including a 10K ruck march, a 5K run and static displays featuring military vehicles including a Blackhawk helicopter.

The opening ceremony will be at 9 a.m. at Old Ford Harrod State Park with the 5K starting at 10 a.m. with the ruck march beginning 5 minutes later.

In addition, a documentary about the Harrodsburg Tankers will be shown at the Mercer County Public Library. On the day of the event, in addition to military displays, the Travelling Kentucky Vietnam Wall will return to Harrodsburg.

This year’s parade is for all veterans. Veterans with mobility issues can get assistance by contacting Jack Mattingly of the Vietnam Veterans of America at 734-0217 or via email at ​jackofalltrades0819@yahoo.com.

“That’s what’s driving this, those 66 soldiers,” said Master Sergeant Anthony Tudor of the Kentucky National Guard’s 103rd Brigade Support Battalion.  This is the second year for the event, which is organized by the 103rd, the City of Harrodsburg, several veterans groups—including the local chapters of the Vietnam Veterans of American and the Veterans of Foreign Wars and several local groups, including the Mercer County Chamber of Commerce, the Harrodsburg First Main Street Program, and Civil Air Patrol Squadron 122.

While all the Tankers are dead, MSG Tudor and Major Jimmie Warinner said they want to make sure the story of the Tankers remains alive.

Mattingly, a Vietnam veteran, agrees that younger generations need a reminder. When he was growing up, many of the Tankers were still alive to tell their stories.

But it’s not just the Tankers who need to be remembered. How many people, Mattingly wondered, drive down Tapp Road every day without knowing who it was named for.

Lt. Comm. John Bethel Tapp was a Harrodsburg native and Navy pilot who died in 1966. Tapp’s plane disappeared while he was returning to the USS Enterprise after leading a night mission into North Vietnam. Tapp’s stepbrother is one of the men who went down with the USS Arizona during the attack on Pearl Harbor in 1941.

There are still sponsorship opportunities for the event. For more information, visit the Mercer County Chamber of Commerce website at mercerchamber.com. There is a $10 entry fee for the 5K run and the 10K ruck march. Registration for is open until Thursday, Oct. 31, at https://runsignup.com/Race/KY/Harrodsburg/BataanMemorial66MarchRunWalk.

For more information, call Julie Wagner at the Harrodsburg First at 734-6811.