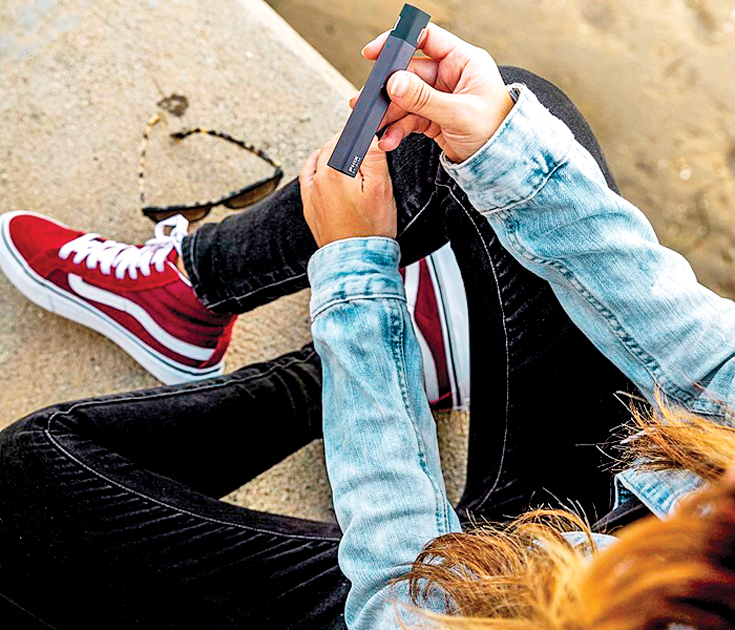 Many kids start vaping thinking they are inhaling only water vapor. So far, 1,080 people have reported suffering lung injuries which may be related to vaping. (Photo credit: Sarah Johnson. Wikimedia Commons).

Despite Injuries, Many Users Still Think They Are Inhaling Only Water Vapor

The federal government is considering a ban on flavored e-cigarettes.

According to the Centers For Disease Control and Prevention, 1,080 lung injury cases associated with using e-cigarette, or vaping, products have been reported in 48 states and one U.S. territory as of Oct. 1.

So far, 25 cases of pulmonary disease possibly caused by vaping have been reported here in Kentucky. Only one case has been confirmed and only two have been ruled out, according to the Kentucky Department for Public Health.

The state, which is working with the CDC and the U.S. Food and Drug Administration, is asking health care providers to check for cases of lung injury.

The injuries are mainly happening to the young. Approximately 80-percent of the patients are under 35 years old, with 16-percent  under 18 years old and 21-percent of those affected being between 18 to 20 years old, according to the CDC.

What exactly is causing the lung injuries is unknown, the CDC said.

According to Emily Steer at the Mercer County Health Department, symptoms of vaping-related lung injuries include cough, shortness of breath or chest pain. Some patients have also experienced nausea, vomiting, diarrhea or abdominal pain.

Federal research shows that the number of U.S. high school students who reported being current e-cigarette users increased 78 percent between 2017 and 2018, to 3.05 million. The same report showed use by middle schoolers increased 48 percent, according to Kentucky Health News.

Most parents are completely blind to the epidemic. The most popular product is Juul, which looks like a USB flash drive. Juul, which is owned by Phillip Morris, and other brands of e-cigarettes can be odorless and hard to detect.

Even worse, many users think they are only inhaling harmless water vapor. The products are often marketed as a smoking cessation tool.

Steer was formerly the tobacco cessation specialist with the health department. Working with student groups, she got local schools to ban tobacco products. Efforts like those led by Steer and other anti-smoking advocates across the nation have led to a sharp reduction in traditional methods of using tobacco among the young. Now, they are watching all of the progress being wiped away by a product that up until recently had not been regulated.

“It’s very discouraging,” Steer said. “We are fighting a multi-billion dollar industry with pennies on the dollar.” 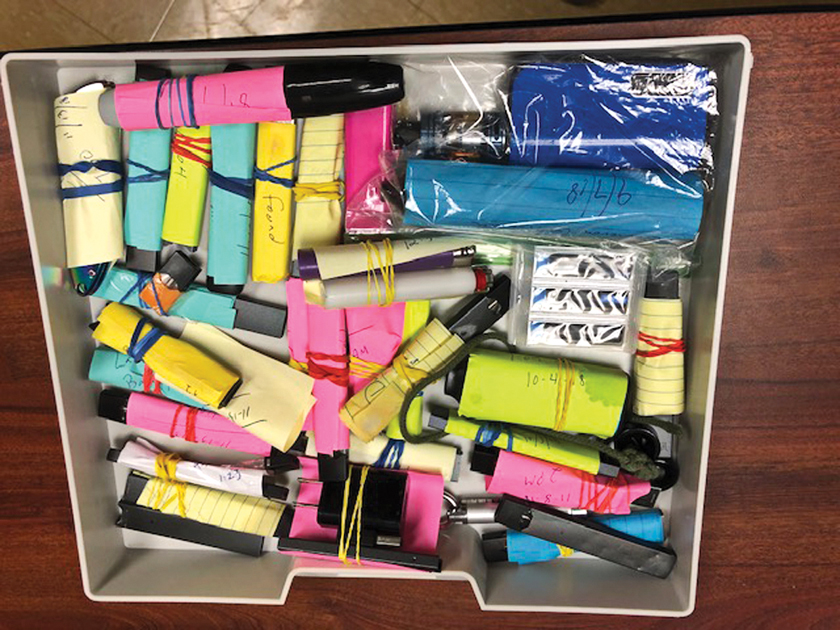 There’s perhaps no better representation of the growth of e-cigarettes among local youth than this picture of the e-cigarettes confiscated last fall by one local school.

While she has been providing schools with information on how to recognize e-cigarettes, Steer said she is no longer working full-time on smoking cessation.

“I don’t have the hours to devote to it,” Steer said.

Despite the vaping industry’s resistance to government regulation, there have been moves made at the state and local level. Currently, 13 states, two American territories and 841 municipalities—including 10 cities here in Kentucky—have banned vaping in smoke-free public areas.

The strictest ban is in Massachusetts. It has been in effect for four months. Last week, a federal judge denied an industry effort to end the ban, though other legal challenges remain, according to Reuters.

It is still unclear if what is injuring users’ lungs is part of the e-cigarette or is something that has been added to it. Electronic cigarettes–  e-cigarettes—are also called vapes, e-hookahs, vape pens, tank systems, mods, and electronic nicotine delivery systems (ENDS). They work by heating a liquid to produce an aerosol that users inhale into their lungs. According to the CDC, the liquid can contain: nicotine, tetrahydrocannabinol (THC) and cannabinoid (CBD) oils, and other substances and additives. THC is the psychoactive mind-altering compound of marijuana that produces the high.

The CDC is telling users to stop vaping and advising smokers who stop vaping to not to resume smoking cigarettes.