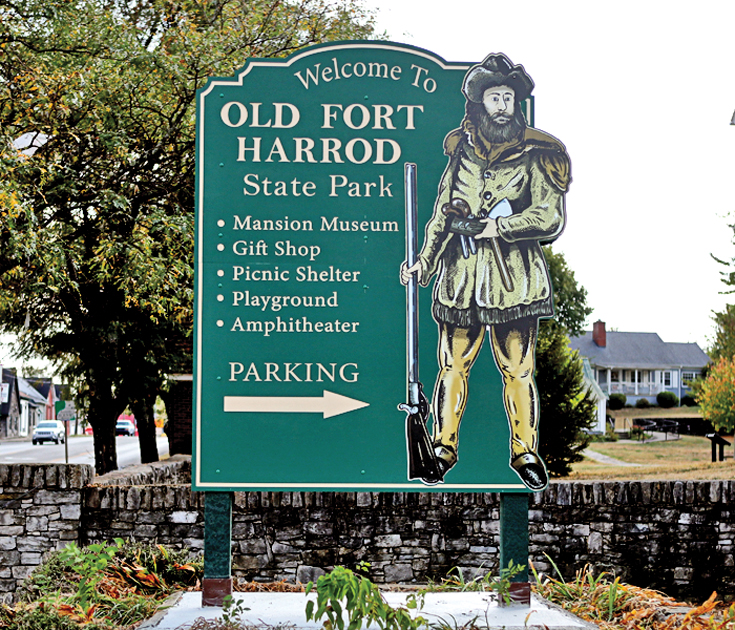 The state erected the new sign at Old Fort Harrod State Park this week. The pioneer man is based on an image of James Harrod, according to state officials. Some local residents would love to see a bronze version of James Harrod standing near the park entrance in time for the city’s 250th birthday.

Many Mercer County residents are upset after learning Pioneer Man, a fiberglass figure in a coonskin cap and fringed buckskin, was removed from his perch near the entrance of Old Fort Harrod State Park. The state has replaced the sign where the fiberglass frontiersman sat for over a decade with a new two-sided metallic sign. The new sign includes a pioneer man, but not the Pioneer Man.

Many say they want Pioneer Man back but the odds of his return are nearly nil. There is a chance that another pioneer statue, one better designed to withstand the elements, could take his place one day. But somebody’s going to have to dig deep.

On Monday night, the members of the Friends of Fort Harrod group discussed Pioneer Man’s future. The group would like to replace the battered fiberglass figure with a bronze statue. They have spoken with several artists—including one who claims Daniel Boone as a direct ancestor—about creating a statue, but it’s going to be costly. 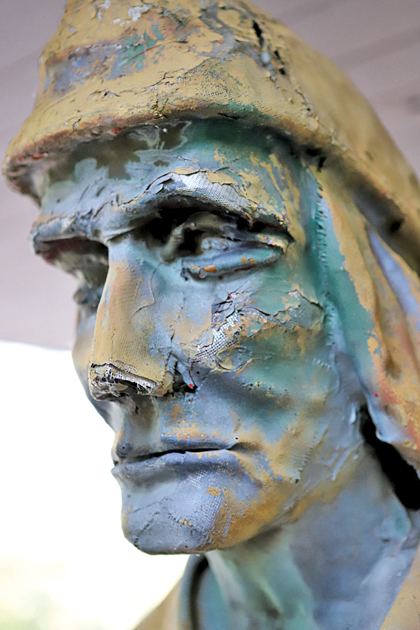 The elements have had their way with Pioneer Man, who stood guard at Old Fort Harrod State Park until recently. The figure is being stored at the amphitheater.

No matter how you add it up, it’s going to take a lot of money to have the statue in place before Mercer County celebrates its 250th anniversary in 2024. Even the cheapest option would cost nearly twice the amount the Friends of Fort Harrod have in the bank.

But that’s hardly the only difficulty. No one really knows what James Harrod looked like. He is one of the most famous men in Kentucky’s history, but there are no known pictures of him, according to Larry Catlett, executive director of Friends of Fort Harrod.

Catlett said according to his research, Harrod stood a little over six feet tall with black hair and dark eyes. Harrod’s most distinctive feature, according to Catlett, was a large, Roman nose.

But not all sources are in agreement with that description. So the artist would have to do considerable research to try to do James Harrod justice. Forest Boone, a bronze artist in Louisville, has said he would need to track down Harrod’s descendants to get a good idea on what Harrod looked like.

While no one agrees  what Harrod looked like, everyone agrees that he never wore a coonskin cap. Harrod, like most frontiersmen, preferred wide-brimmed felt hats or tri-corner hats. The image of the backwoodsmen in fringed buckskin and coonskin cap dates back to actor Fess Parker, who played both Davy Crockett and Daniel Boone on TV.

It bothers Catlett, a historical reenactor, that the image so many have of James Harrod is actually ahistorical. “We’re still using an image from a 1950s Disney show,” Catlett said.

It would take 18 months from research to the final statue. That doesn’t leave a lot of time to raise the necessary funds. It was suggested donors could purchase plaques at the base of the statue. Another suggestion was giving Mercer County residents a chance at designing the statue in a contest. After all, they will be living with it a long time. But before they can start raising money, decisions need to be made.

“We have to decide what we want so we can get some real numbers,” Catlett said.

Then there is the fiberglass Pioneer Man, which is badly in need of repairs.

The Friends are looking for someone to repair the statue, which is being kept at the James Harrod Amphitheatre. 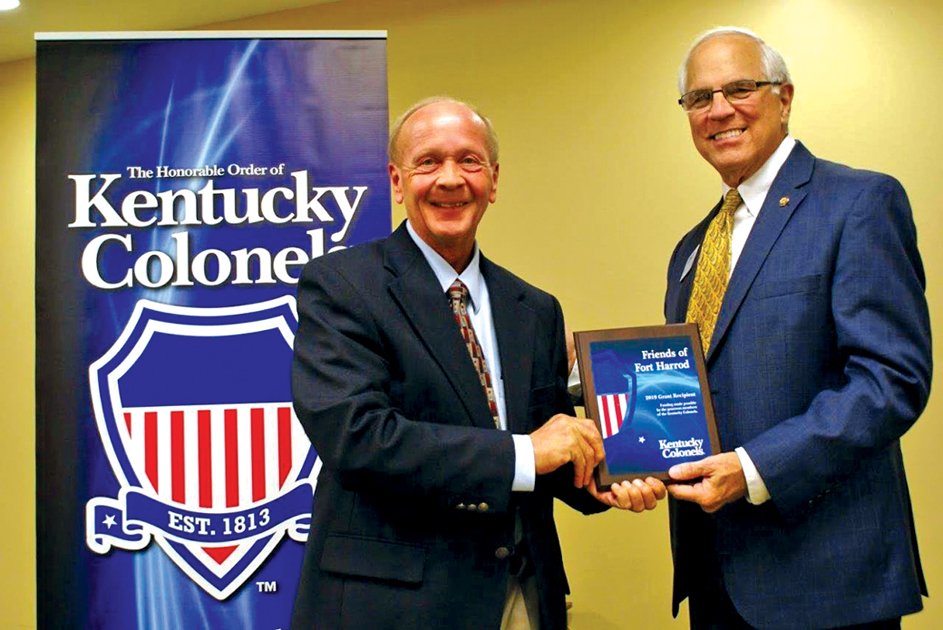 Larry Catlett of the Friends of Fort Harrod accepts a grant from John S. Shropshire of the Kentucky Colonels. The grant will be used to repair the stone wall at the rear of Old Fort Harrod State Park.

He said the application process for the grant was difficult for a small group like the Friends. Catlett thinks the free tickets to this year’s production of “James Harrod: The Battle For Kentucky” they provided  to a representative from the Kentucky Colonels helped secure the funding.

“It probably tipped the scale in our favor,” Catlett said.

They have to spend the money by Dec. 13. The application process opens in February, and the board members are considering whether to ask for money for the bronze James Harrod statue.

The Friends of Fort Harrod are also receiving matching grants totalling $4,250 from national and local chapters of the Rotary to buy chairs for the amphitheater. The chairs will be used not just during the outdoor drama, but on movie nights and during weddings at the park.

It’s an exciting time at the park. The Harrodsburg-Mercer County Tourist Association donated $100,000 towards renovations and the state is also investing money into the park. Attendance at events like Pioneer Days and last weekend’s Fort Harrod Jazz Festival are up. But that’s barely patch on what organizer’s expect for Harrodsburg’s 250th birthday. Many hope James Harrod—or at least a reasonable facsimile—will be there to see it.