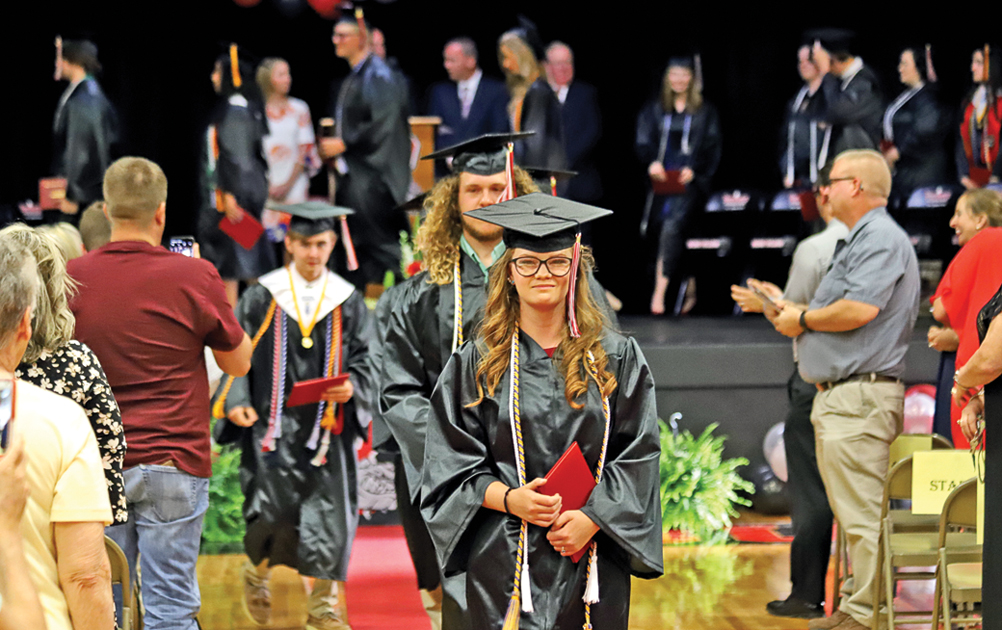 Taylor Renee Lewis and other members of Burgin’s class of 2019 walk the aisle after collecting their diplomas in May. Burgin Superintendent Will Begley is proud of the high schools’ graduation rate as well as the percentage of graduates who are ready for college or a career.

While the commonwealth of Kentucky has seen fit to unveil a brand new rating system this year, the results for Burgin were pretty much the same as last year. All three schools within the Burgin Independent school system—elementary, middle and high school—earned  four out of five stars.

While the metrics are new and not comparable to last year’s data, Burgin Independent remains one of the top districts in the area.

The new five-star rating system is designed to help families and communities see  where schools and specific groups of students may be struggling, according to the state.

“Our state assessment data only cements the fact that the strategies, interventions and delivery of content by our entire staff is spot on,” said Burgin Superintendent Will Begley in a press release. “Our elementary proficiency rate is right there near the top among all area elementary schools. Our middle school ranks first among all area middle schools in proficiency rate in writing and social studies and second in reading proficiency. We are also very proud of our high school because of their high marks in the areas of graduation rate (100-percent) and transition readiness (96.8-percent).”

Of the 228 high schools in Kentucky, only seven  were rated five-star while  27—including Burgin and Boyle County—were rated as four-star. Mercer, Anderson and Garrard County high schools were among the 120 who earned the three-star designation.

Of the 725 elementary schools in Kentucky, 37—among them Junction Elementary in Boyle County —earned five star ratings while 146—including Burgin, Perryville, Woodlawn, Camp Dick and Paint Lick were labelled as four star schools. According to the state, 364—including Mercer—were ranked as three star schools.

Most importantly, not one of Burgin’s schools was found to have a significant achievement gap. This can be a tricky proposition for small school systems like Burgin, were one under-performing student can affect the entire school’s ranking.

Begley was proud to point out that basically Burgin Independent one of only seven districts in the Kentucky where all the schools earned a four star rating or higher  while Burgin High School is one of the top 34 high schools in the commonwealth.

“These results, coupled with the 20 career pathways we have in place, proves that we are committed to making the Burgin graduate ‘Transition Ready’ for the 21st century workforce,” Begley said.

He said the data will also serve as a baseline as Burgin works to have all the schools within the system earn the five star status.

“Our community is proud of all the hard work our students and staff put forth,” Begley said. “It also proves that our unique, small school setting provides us the opportunity to focus individually to ensure student success. To have all three of our schools earn the four-star ranking and continue to be one of the premiere school systems in the area is something we will again celebrate.”

“My hope is that families, districts, schools and community stakeholders use the information on the School Report Card as a starting point for honest and productive conversations about a school’s many areas of strength, areas for growth and plans for working collaboratively to ensure each and every student is well-prepared for his or her future,” Lewis said in a press release.

Find out how Burgin and other school systems were assessed online at www.kyschoolreportcard.com.