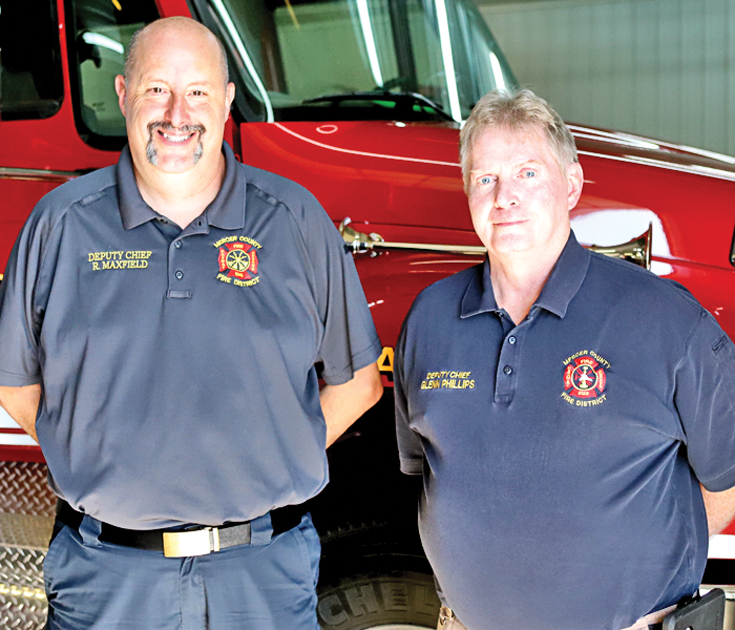 Ric Maxfield and Glenn Phillips of the Mercer County Fire Protection District say everything needs to be considered—including the safety of citizens—when deciding how to pay for E911 services.

First responders hope an upcoming meeting of the Mercer County communications committee can clear up some of the uncertainty regarding county E-911 services.

A $40 parcel fee failed to pass for lack of a motion at a special-called hearing of the Mercer County Fiscal Court in July, after the measure had passed in Harrodsburg and Burgin. The county will use carryover funds to pay for the federally-mandated service for another year, but once those funds are gone, local government will need to find a way to pay for it. The communications committee is meeting Wednesday, Sept. 11, at 3:30 p.m. at the Harrodsburg City Hall (located at 208 South Main Street) to look at their options.

The measure was defeated after several local landlords complained, saying the fee was unfair.

One suggestion for funding 911 services was a vehicle tax, which some opponents felt would be more fair.

Ric Maxfield, chief of the Mercer County Fire Prevention District, said there is no such thing as a fair tax. A vehicle tax would affect farmers and construction or transportation companies that own multiple vehicles. Maxfield said any tax or fee that local governments create is going to affect some group more than others.

“You have to look at the community as a whole,” Maxfield said.

The chief stressed that he was not advocating for the parcel fee or any other tax, and that he is open to any better options. But the parcel fee didn’t just appear out of thin air. Officials considered other proposals, including fee on water taps, before settling on it.

For the time being, the Mercer County government will fund E911 services using an estimated $485,000 that remains in a land line account. However, the county can only spend 65-percent of the land line funds, which is one of the reasons the account has grown over the last few years even while land lines decline. The rest of the budget will come from the county’s general fund.

Since 1967, 911 call services across the country have been paid for largely through fees collected on land lines. However the number of land lines have decreased drastically. According to a report compiled by the National Association of Counties, in 2015, 80-percent of 911 calls were made on cell phones, while cell phone users only paid 20–25 percent of total 911 fees.

In Mercer County, cell phone owners pay 80-cents a month for 911 service, while land line users pay up to $4 a month. While prepaid phone users do pay 911 fees, Maxfield said they are difficult to collect at the county level because of the many providers involved.

“How do you track down all that money?” he said. “You can bog yourself down in three pennies here and three pennies there but the gist of the problem is that the land line money is going away.”

Maxfield said everyone seems to focus on the cost and fairness of the parcel fee, but no one addressed the costs that would be shouldered by taxpayers if 911 services were curtailed or transferred to a regional call center.

“There are a couple of points people are not thinking about,” he said.

“It is vital that we keep our 911 center in Harrodburg,” said Glenn Phillips, deputy chief of the fire protection district. “I see disaster if we allow our 911 center to be moved elsewhere. I might be wrong, but I’ve been doing this a long time.”

Phillips noted the parcel fee came out to $3.30 per month per parcel, about 70 cents less than the old land line fee. “In my view, it’s a very reasonable cost,” he said.

“It’s your worst day when you’re forced to call 911,” Phillips said. “If it’s delayed a minute or two, that can be the difference between life and death.”

With 36 years of experience as a firefighter, Phillips can remember when the original 911 call center was located in current Harrodsburg Fire Chief Scott Hammons’ office.

“We were kind of on the leading edge back in the day,” Phillips recalled. He said surrounding counties were still using funeral homes to ferry people to the hospital.

Maxfield, who has 25 years of experience as a firefighter, retired as chief of the Harrodsburg Fire Department in 2018. He praises the job done by the dispatchers at the 911 office. But he notes some of their equipment needs to be replaced, and that’s not likely considering the current funding situation.

Once upon a time, it was every citizen’s responsibility to fight fires. If the alarm was raised, the able-bodied were expected to drop everything and come running. Today, in lieu of performing that labor ourselves, we pay taxes. Maxfield said despite the apparent complexity surrounding 911 operations, there are really only a few things any one needs to know.

“Somebody has to answer the phone,” Maxfield said. And if Mercer County wants to make sure that somebody is from Mercer County, they’re going to have to figure out how to pay for it.