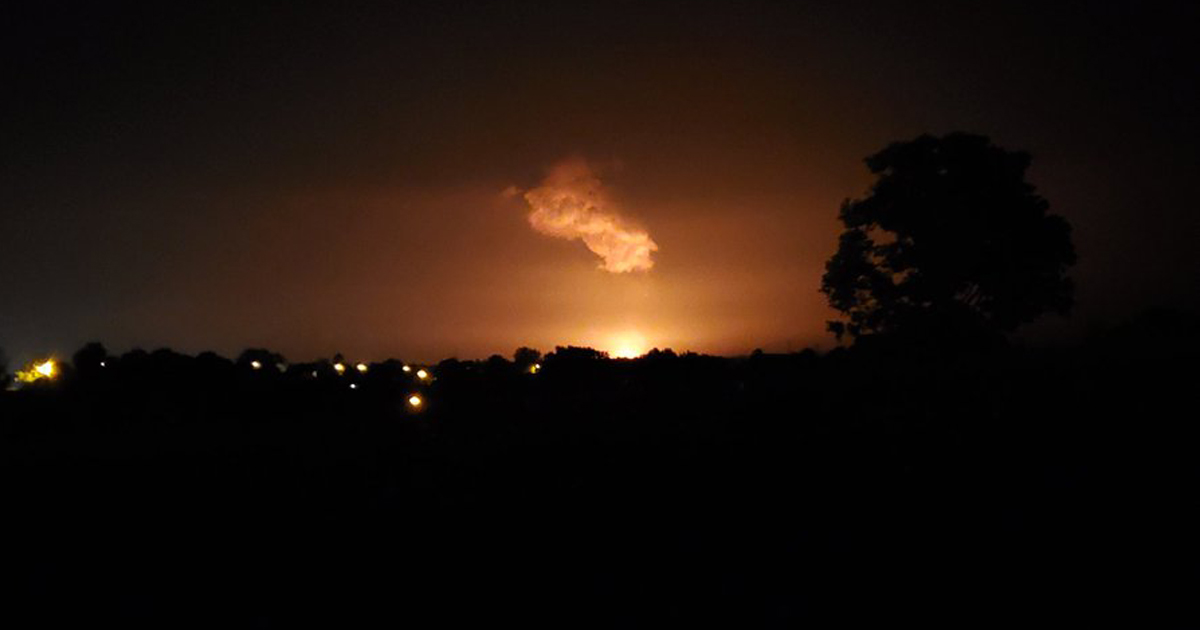 Photo Submitted
Derek Lane of Mercer County took this picture of last week’s pipeline explosion in Lincoln County. The blast killed one, injured five and has left at least 10 families either temporarily or permanently without a home, according to media reports.

Federal investigators are trying to determine the cause of last week’s pipeline rupture in Stanford. The ensuing explosion killed one person and injured five others and left at least 10 families homeless. The blast was so violent it could be heard and seen here in Mercer County.

According to the Kentucky State Police, the fire occurred near Indian Camp Road, east of Stanford in Lincoln County.

The National Transportation Safety Board is trying to determine what caused the explosion. They are working with Enbridge Inc., who own the pipeline, and the Pipeline and Hazardous Materials Safety Administration, a division of the Department of Transportation and the national regulator of liquid and natural gas pipeline safety.

According to Williams, the Texas Eastern Pipeline was installed in 1957 and carries natural gas from Ohio to Mississippi. The pipe is 30 inches in diameter and transports approximately 1.8 million cubic feet of natural gas per day. Investigators will take a piece of the pipeline to the agency’s metallurgy lab in Washington D.C. for a detailed examination, he said.

At approximately 1:24 a.m. Thursday, the pipeline ruptured, releasing natural gas, which ignited. The ensuing explosion sent flames 300 feet into the air, which could be photographed here in Mercer County. The blast happened with such force that an approximate 30-foot section of the pipe was ripped right from the earth, according to Williams.

NTSB have met with Enbridge and a representative from PHMSA. Williams said Enbridge, which operates the longest crude oil and liquid hydrocarbons transportation system in North America as well as the largest natural gas distribution network in Canada, is only providing assistance.

“They do not participate in any of the analysis or determination of cause,” Williams said on Monday.

He said the investigative team is focusing on pipeline integrity, particularly maintenance and inspection.

They are in the process of interviewing operators and maintenance personnel, first responders and any one else who may have something to contribute.

Williams said investigators will remain on the scene for a week, but the full investigation could take up to 18 months.

This is the second explosion related to the Texas Eastern pipeline this year. According to Yahoo.com, the system has had 14 federal enforcement cases against it related to corrosion, integrity and maintenance since 2005. According to the same article, Enbridge’s stock price has taken a hit, as investors worry the company may face another protracted legal battle.

In 2010, an oil pipeline owned by the company ruptured, spilling an estimated 843,000 gallons of crude oil into a tributary of the Kalamazoo River in Michigan. The case was settled in 2015, but efforts to counteract damage to the river, parts of which were closed to the public, are still ongoing.

In a statement on Enbridge’s website, the company said they are continuing to provide assistance and support for those affected by the incident.

“Since the event, we have mobilized a dedicated care team to the incident site. This care team of Enbridge personnel is working directly with affected landowners, in close coordination with numerous community service organizations, helping with temporary housing, transportation, meals, counseling and any other needs of the local community.”

While declining to comment on the investigation, Enbridge confirmed it is cooperating with the NTSB. Enbridge said air, water and soil sampling is being conducted as part of their standard procedure to ensure the ongoing safety of the affected area.