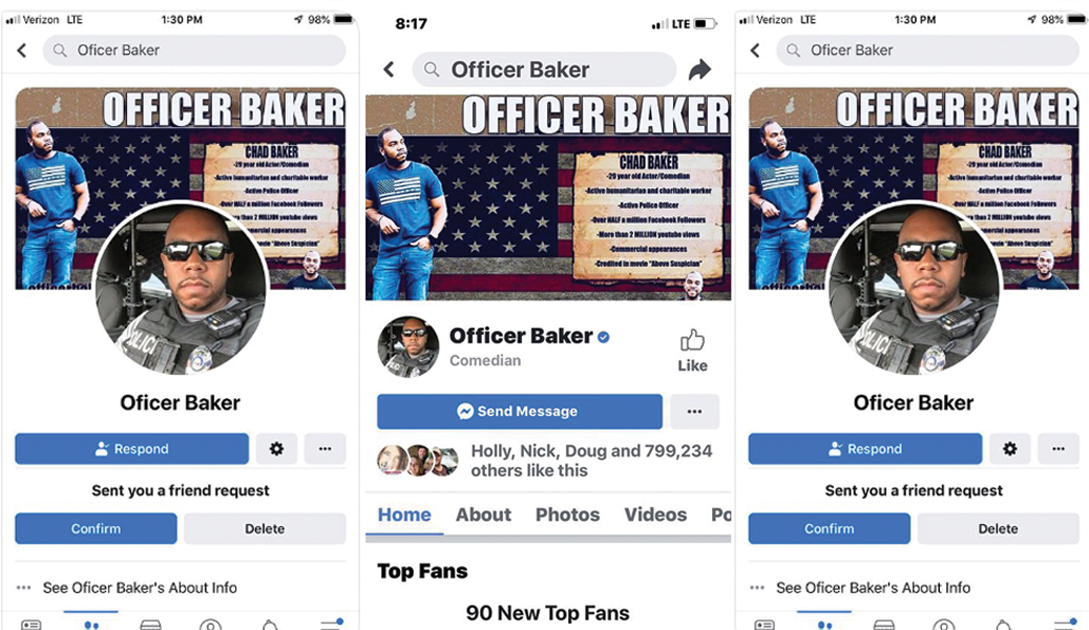 The Harrodsburg Herald/Photo Composite By Robert Moore
One of these things is not like the others. Burgin Police Chief Chad Baker, who posts on Facebook at Officer Baker, said there are at least three clone accounts who have used his likeness trying to scam his followers.

An Online Attack Of The Clones

The next time you receive a friend request on Facebook, you might want to check carefully before you approve it. The person making the request might not be who you think they are.

For instance, most people know who Officer Baker is. He’s Burgin Police Chief Chad Baker, who’s been posting humorous online videos as a way to humanize police officers since 2015. The Officer Baker videos are very popular, and the account has accumulated 880,263 followers on Facebook and another 100,000 followers on Instagram.

But do you know who “Oficer Baker” is? He has a Facebook account too—or he used to—and he also wants to be your friend. He also wants you to register on his fake website, where you are “automatically recorded as a winner.” Just give him your bank account information and prepare for your prize.

“They save your picture and then make a new account using my real pictures to act like it’s me,” Baker—the real Baker—explained recently.

Baker is hardly the only internet celebrity to be cloned. Both Tyler Perry and Oprah Winfrey have been used by scammers, who set up fake Facebook accounts with deliberately misspelled names in order to con people out of their personal information and money.

The real Officer Baker sent out an alert to his followers on July 24 warning about the fake “Oficer Baker,” which was removed by Facebook.

The social network claims to have 2.7 billion users across its various platforms, which include Facebook, Instagram and WhatsApp. In the period from January through March 2019, the network said it removed 2.8 billion fake accounts. Facebook estimates that fake accounts represented approximately 5-percent of their worldwide monthly active users, according to Facebook’s transparency page. The social network claims the majority of the fake accounts are caught within minutes of registration.

But when this reporter recently searched through my Facebook friends, I found half a dozen cloned accounts, including two Scott Moseleys.

Moseley, as most readers will know, is a Harrodsburg city commissioner. His Facebook account was cloned in June.

Moseley said the clones also asked his friends for money. While Officer Baker has nearly a million followers, it’s hard to see the advantage of cloning a small account like Moseley’s.

“I guess if they get money from one person it is a win,” Moseley said.

Of course, Moseley is far more popular than this reporter, who was cloned earlier this month. I barely have 200 friends on Facebook. None of my real friends will loan me money, so any clone of mine is out of luck.

“LMAO,” said Baker via Facebook Messenger. “I guess they figure it’s worth a shot.”

One way to spot a cloned account is the misspellings. Research has found the misspellings and grammatical errors in scam accounts and emails are a highly effective tool in separating suckers from their money. In 2012, Microsoft Research looked at certain scams such as the infamous Nigerian prince, who sends out emails written in highly tortured English asking people to send him their information so he can  deposit millions in their bank accounts.

The researchers found that because so many internet users ignore the scams, the people who do respond are more likely to send money. So your high school English teacher was right. Spelling really is important.