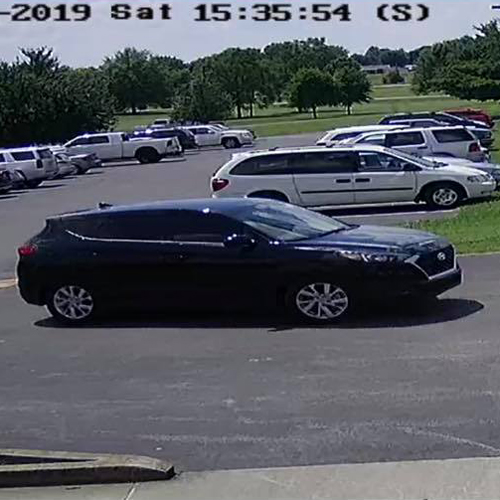 Police believe this vehicle is connected to a break-in at Anderson-Dean Park on June 29. Anyone with information is asked to call 734-3311.

Police are still looking for information about what they call a “brazen” daylight break in at Anderson-Dean Community Park.

According to the Harrodsburg Police Department, on Friday, June 29, Wendy Peyton reported someone broke a window out of her gray four-door Dodge Charger and stole her purse while she was at the park.

According to HPD Cpl. Tony Godbey, the robbery occurred between 1 and 3:45 p.m.

Godbey said the thief tried to use a stolen debit card in Danville.

The HPD posted surveillance camera footage of a car suspected to belong to the burglar on Facebook, but Godbey said none of the tips have led to an arrest.

The department is also investigating the theft of a firearm.

On Tuesday, June 26, Loretta Downs reported  someone stole a firearm from her residence.

The firearm, a .22 caliper single action–model Heritage Rough Rider, has an estimated value of $250. This case remains under investigation by Cpl. Chris Booth (HPD).

Anyone with information on cases still under investigation is urged to contact the police department at 734-3311.