Updates On Oktoberfest And The Fort Harrod Jazz Festival 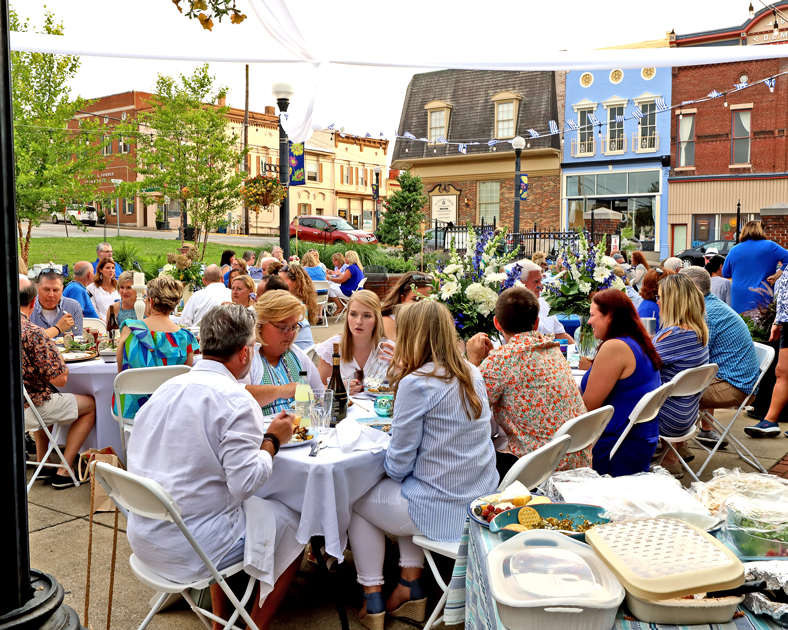 Organizers for Harrodsburg’s first Dinner On Main Street say they raised Wagner said she believes they made $1,000 at the fundraiser, $500 of which has already been donated to Ragged Edge.

Three new dates have been announced for Main Street Market Nights. The Harrodsburg First Main Street Program announced there will be market nights on July 12, July 26, Aug. 9 and Aug. 30, and Sept. 13. The events will run from 6–10 p.m. on Fridays.

Julie Wagner, executive director of Harrodsburg First, said they are looking at possibly expanding the hours and the number of musical events starting with the next event, which happens on Friday, July 12, at Olde Towne Park on Main Street in Harrodsburg.

The event was created to draw a younger crowd, but the younger crowd didn’t arrive at the first Main Street Market until after 8 p.m., Wagner said.

Lora White, chair of the promotion committee, said vendors are calling to participate in the next Main Street Market. White said the original idea for the event came from her grandmother’s tales of traveling to Harrodsburg on market days. She said they hope to have local farmers participate. 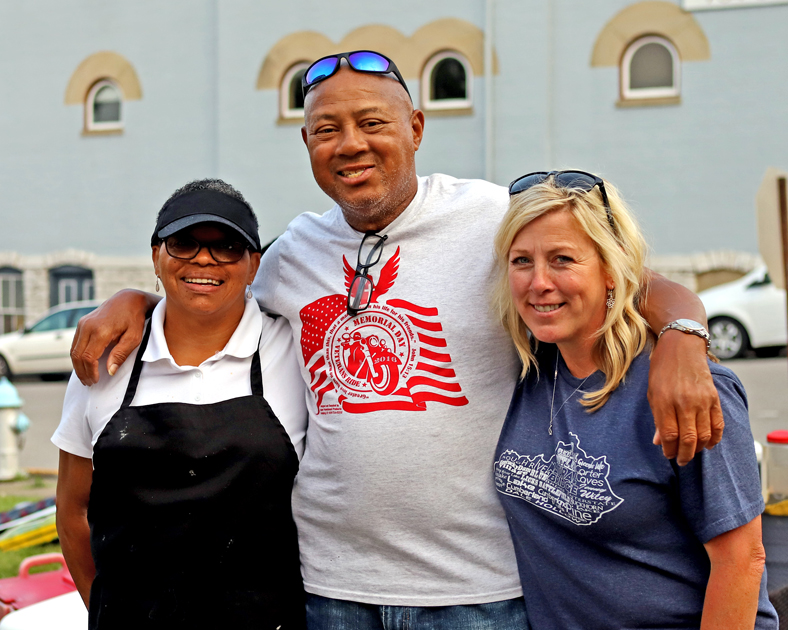 Lora White, right, chair of the Harrodsburg First promotion committee, is pictured with Sheridan McKee and Bo Yeast at the first ever Main Street Market Night. White said one of the inspirations for the event is the stories her grandmother once told her about traveling to Harrodsburg on market days.

Harrodsburg First was also happy with the first ever Dinner in Blue and White, which happened on June 15. The event was created as a fundraiser for Ragged Edge Community Theatre and for an initiative to install murals at six different different downtown locations before Harrodsburg celebrates its 250th anniversary in 2024.

Wagner said she believes they made $1,000 from the Dinner in Blue and White, $500 of which has already been donated to Ragged Edge.

Harrodsburg First’s design committee is already planning next year’s fundraiser. The Dinner in Blue and White was a Greek-style communal dinner tied into Ragged Edge’s production of “Mamma Mia!”Next year’s dinner will have a “Wizard of Oz” theme to coincide with another Ragged Edge production.

While nothing is set yet, they play to have a yellow brick road that will lead to Olde Towne Park.

“I think next year will be huge,” said Chris Dotson, the chair of the design committee.

That’s hardly the only event being planned this year by Harrodsburg First, who also plan out the Twilight Christmas Parade (Friday, Dec. 6) as well as the Spooktacular (Saturday, Oct. 26) and Night of the Great Pumpkin (Thursday, Oct. 31).

The biggest event in October for Harrodsburg First is Oktoberfest, which returns this year from Friday, Oct. 11, through Sunday, Oct. 13.

Greg Souder of the Oktoberfest committee said they are in good shape. The stage is reserved and 98-percent of bands and most of the food vendors have been lined up.

Souder said they are looking at repositioning some things, including adding more hightop table and chairs and moving the beer closer to the stage. Most importantly, most of the past sponsors have agreed to participate again this year.

Perhaps the most important thing to do now, Souder said, is pray.

“We have to begin now, if we haven’t already, to pray for good weather,” Souder said.

Adrian Crutchfield, who scored a big hit at last year’s festival, returns as the headliner on Saturday. The Jamey Aebersold Jazz Quartet will make their debut at the festival on Saturday. Aebersold, an a internationally-known saxophonist and educator, is from Indiana. In 2014, the musician was awarded the National Endowment for the Arts Jazz Master Award, the nation’s highest honor in jazz

While the focus is on the music, there will also be art during the Artisan Expo on Saturday.

Organizers say 21 artists have verbally committed so far, including artists from the Arts Councils of Mercer and Anderson and possibly Danville. In addition, student artists from Mercer County schools and 4H program will participate. Organizers are expecting 25-30 artists.

They are also planning to hold preliminary events leading up to the main festival, including a Metrognomes concert at Shaker Village of Pleasant Hill on Saturday, Sept. 14, at 6 p.m.