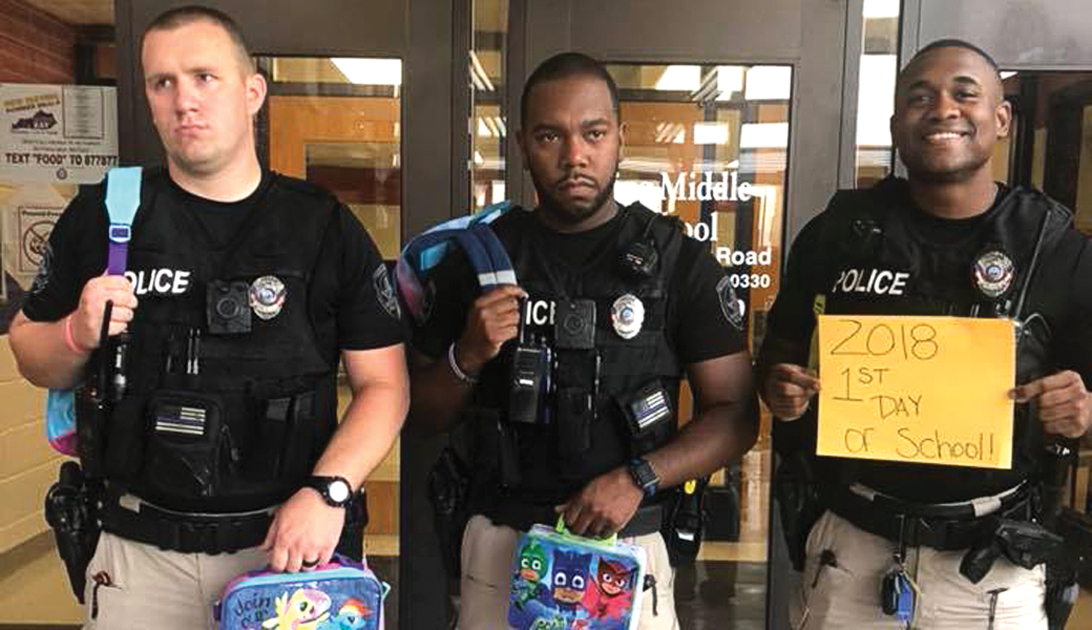 This photo of School Resource Officers T.J. Wren, Chad Baker and Daylen Morris went viral on the first day of school last year. All three officers resigned from the Harrodsburg Police Department last month, and six have left over the last few months.

Update: This story originally reported the City of Harrodsburg eliminated hazardous duty pay in 2019. It was actually eliminated in 2009 and to clarify a “parcel” refers to land.

On Monday night, Ted Dean told the City of Harrodsburg Board of Commissioners that he had “grave concerns” about the HPD.

Dean is the Mercer County Attorney, but he told the city commission he was coming to them as a concerned citizen. He said the city needs to find a way to retain police officers.

“It seems like we get them in, we get them experienced and then we lose them. We lose them to other communities that can pay more, that can provide better benefits,” he said.

Dean said he didn’t like to get involved in city business, but it takes years for officers to learn the job and to learn the community. Small police departments like the HPD have to make up for their size through experience, and Dean said that valuable experience is walking away. Even now, the remaining officers are getting offers from other departments, he said.

When asked if losing officers prevented Dean from prosecuting cases, he said it wasn’t a problem as long as they remained inside the state.

“They’re always amenable to work with me even after they leave the department,” said Dean, who said he rarely resorts to using subpoenas to get former officers to testify.

Commissioner Scott Moseley said what causes officers to leave is not the pay but benefits like family insurance and hazardous duty pay, which was eliminated in 2009. Moseley said they had issues with retention even before eliminating hazardous duty.

The commissioner said he and Mayor Art Freeman were meeting with Chief Brian Allen and Major Tim Hurt of the HPD to look at how to better retain officers.

Whatever the plan, it won’t be cheap. Commissioner Marvin “Bubby” Isham said he hopes a new proposal to fund 911 will help free up some money. The department has been funded from a fee collected for land lines, but the number of land lines has been shrinking for decades, and the city has had to make up the shortfall.

“It took a lot of money to fund dispatch,” Isham said.

The commissioners gave first reading to ordinance 2019-13, which establishes a once a year fee of $60 per chargeable parcel—a tract of land—to fund the 911 call center. When the parcel fee begins, the land line fee will be discontinued.

But if it takes a tax increase to keep first responders, another concerned citizen, Ruth Guthrie, said she was “all for it.” Guthrie said they needed to restore hazardous duty pay to police and firefighters.

In other business, the Harrodsburg City Commission announced the retirement of City Clerk Kim Stinnett effective Aug. 1. Stinnett, who also serves as city treasurer, budget director and deputy ABC administrator, has been with the city for 23 years.

“You’ve been the jewel of the ‘burg,” Mayor Freeman said. “I’m going to miss you but I’ve got your phone number.”

The commission moved to promote Dep. City Clerk Shavonna Huffman to assume Stinnett’s duties on Aug. 1. However, they did not set Huffman’s pay. The mayor said he would have a recommendation at the next meeting.

The next meeting of the Harrodsburg City Commission will be 6 p.m. on Monday, June 24.